Michael Apted, whose reality series Up followed its cast over 56 years, has died

Michael Apted, the director responsible for a documentary reality TV series that spans more than 50 years, has died at age 79.

The series, which was parodied on The Simpsons, followed seven kids at age seven, and then checked in with them every seven years until age 63. It’s an unparalleled achievement in documentary reality TV—no show or series has followed the same people over that length of time—and an experiment that’s unlikely to be repeated.

Apted, who also directed the James Bond movie The World Is Not Enough, the Jodie Foster film Nell, and eactually started working on the production for the original, helping to cast Seven Up!. He then directed all eight follow-up films and seasons, starting with 7 Plus Seven in 1970.

The final installment, 63 Up, was broadcast in 2019 on ITV. The franchise “demonstrated the possibilities of television at its finest in its ambition and its capacity to hold up a mirror to society and engage with and entertain people while enriching our perspective on the human condition”, ITV managing director Kevin Lygo told BBC News.

“The ‘Up’ series is one of the five or 10 most significant franchises in the history of filmed media. Period. Full-stop,” Hollywood Reporter TV critic Dan Fienberg tweeted.

Apted attempted a version of his original series in America with A&E’s 2002 series Married in America, which profiled nine married couples, and then checked back in with them on a 2007 Hallmark series.

Apted received the Peabody’s 2012 institutional award for his work on the series, and the commendation said this:

“For nearly half a century, director Michael Apted has followed the life progress of 14 British children in his acclaimed Up series. Just 7 years old when 7Up was filmed in 1964, the subjects now are well into middle age. Eight installments of the series have been produced. The latest, 56Up, debuted in 2012. Interviews with the participants since 7Up have been voluntary, and all but one of the original 14 shared life updates in 56Up. Experiencing Apted’s series is like catching up with old friends as they face life’s challenges and comforts. We feel an intimacy with the subjects; they make us feel good, refreshed or depressed as we watch them age. The original idea behind the series was to examine the realities of the British class system at a time when the culture was experiencing extraordinary upheaval, with the assumption that each child‘s social class would predetermine his or her future. While that assumption has been borne out to a great degree, the series has long since become more personal than political. Notable for its creator’s patience and its subjects’ humanity, the Up series, a unique social document, receives an Institutional Peabody Award.”

The full series—through 56 Up—is on Britbox (which has a free trial on Amazon), while 56 Up is on DVD and is available to stream on Kanopy and can be rented or bought on Apple TV. 63 Up does not appear to be available anywhere yet.

“Seven Up! was the first serious piece of work I was involved with, and now it’s my whole working life in front of me,” Apted told the New York Times in 2019. “I’m not going to be well enough to make another of these — it’s an irony that here are the bookends of my life. I might have 10 more years of sadness of not doing what I want, but there’s something beautiful about that — about having my life in that beautiful box.” 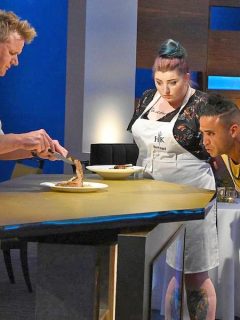 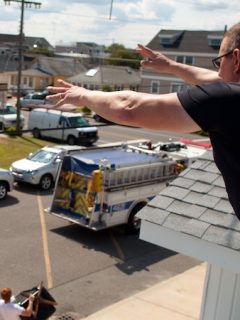