Julie Chen Moonves’ gifts to Big Brother cast and crew: a Bible, ‘BB22 by the grace of God’ mask

In October, two days before the finale of Big Brother 22, Hamsterwatch reported that the host of CBS reality competition, Julie Chen Moonves, “gave gifts to staffers: a face mask with ‘BB22’ and ‘by the grace of God’ on it, and a ‘study Bible’.. I’ve heard this from separate & unrelated sources.”

But it wasn’t just staff members who received those gifts: both fans and Big Brother cast members have received some of the same items, as Julie herself acknowledged in a video last month.

On Nov. 19, Julie gave away 10 Big Brother gift bags, announcing that in an Instagram video. “A $100 AMEX gift card; a limited edition Big Brother mask, only given to the staff and crew who worked on Big Brother all-stars this past year; a Dunkin’ Donuts commuter thermos; my favorite granola made locally here in Southern California; …and then finally, the best, my favorite book ever. You guessed it: the Holy Bible, and it’s a study Bible, so if you’ve never owned one, this tells you how to read it and how to follow along. It’s awesome.” She entered people who followed her other Instagram account, @HaveFaithFamily.

The Bible is the NIV Foundation Study Bible, which Amazon is selling for $32.49 and describes as “the world’s most popular modern-English Bible translation—the New International Version—features an approachable and easy-to-use layout, with straightforward and broad study notes that help you discover the beauty and truth of God’s Word.”

The National Enquirer—which is not a publication that has earned journalistic trust, in part because it admitted to paying women to not talk about affairs with Donald Trump—actually wrote in late November about the gifts to Big Brother crew members. Its article quoted an anonymous source who said, “People were so offended they called human resources to complain” and “It really rubbed people the wrong way. Anything religious should not be part of the workplace. And even if it was meant tongue-in-cheek or as a joke, it wasn’t funny.”

Julie Chen Moonves—who started using her husband’s last name professionally after he was forced to resign in the wake of women saying he’d sexually harassed, assaulted, and retaliated against them—has posted to social media with religious content.

During the season, Julie posted a photo of herself behind the scenes holding a Bible, and one fan wrote on Twitter, “Julie Chen is over here holding a Bible on set, while she is watching so many shenanigans happen inside that house. The discrimination in those walls is atrocious and unacceptable.” (An all-white alliance dominated on BB22, repeatedly nominating everyone except white men for eviction.)

Julie also posted an image of herself wearing the “BB22 by the grace of God” face mask, and earlier, on Nov. 1, posted an image of those face masks and a Bible with the caption, “The only book allowed in the BB house is this one right here. The Holy Bible. A Word indeed.”

On Big Brother, the contestants are not allowed to bring any reading material with them except religious texts, but they are not limited to the Bible.

Late last month, BB15’s McCrae Olson posted an image to Instagram himself wearing the Big Brother-branded mask, which has “BB22” and “By the grace of God” embroidered on it, and thanked Julie for the mask.

Julie also quoted from the Bible as her closing words during Big Brother 22, paraphrasing Matthew 7:12, saying, “And remember the golden rule: Do unto others as you would have them do unto you.”

She told Entertainment Weekly, “I chose to close with those words because Black Lives Matter and now is the time to speak up. If the number of Black lives that have been taken happened to people of your heritage, you would be saying (fill-in-the-blank) Lives Matter! It’s my faith in God that is getting me through these uncertain times.”

It’s clear from the Instagram video how much Julie thinks these gifts are awesome, from her favorite granola to the Bible, and undoubtedly her intentions are good. But is it appropriate to send religious gifts to co-workers, whether or not they share your religion? No.

What is also clear, from a video posted online, is that such gifts send messages to their recipients. The gifts Julie gave away for free are the same ones that one of BB22’s cast members, Kevin Campbell, opened and revealed in a live video last night.

In a hilarious video posted to social media, Kevin discovers in real time what he’s received from CBS. First, he pulls a Bible from a box and says, “My God. They’re like, You are so un-Christian, like—you need Jesus. That’s what they’re saying, like I need fucking Jesus.”

Kevin, who first appeared on Big Brother 11 and placed third, wrote in his bio for season 22 this year, “I grew up a Jehovah’s Witness but was excommunicated at 21 years old.” In 2009, Kevin told GLAAD,

“I remember the moment I realized I was gay was when I was in a meeting at church and they were reading a scripture in the Bible about how men who sleep with men are evil and wicked. And I remember as a kid, listening to that, and I was like, ‘Oh my God, I think that’s me!’ I felt like the whole congregation was looking at me and I felt dirty, and you know, it definitely impacted me. I think conversely though, it helped me become the fabulous person I am now because I never want to go back into that corner—I never want to go back in the closet. I never want to have that feeling again. I just don’t want to go back to that space again, and that’s why I was fabulous like I was in the house, because I didn’t want anyone to put me in the closet again.”

In the video, Kevin asks, “What is going on?” before adding, “There’s a card. Ya’ll this is from Julie.” He laughs and says “Julie said I need Jesus” before reading what’s on the card:

“Thank you for another incredible season. By the grace God we were able to work in a safe environment. Stay safe, healthy, but first Dunkin’ Donut coffee and prayer. Praise God and Amen.” Previous
This week's 19 reality TV premieres, from The Challenge to The Great Christmas Light Fight 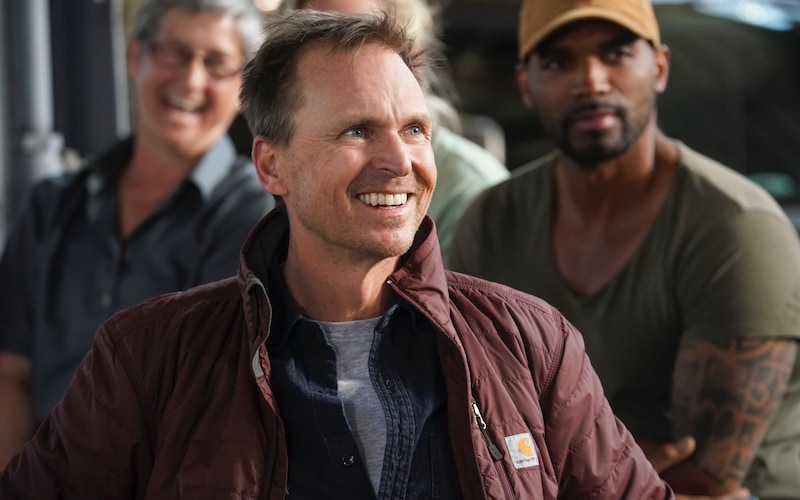 Next
Tough as Nails season 2 is getting Survivor's spring timeslot
Click here to cancel reply.