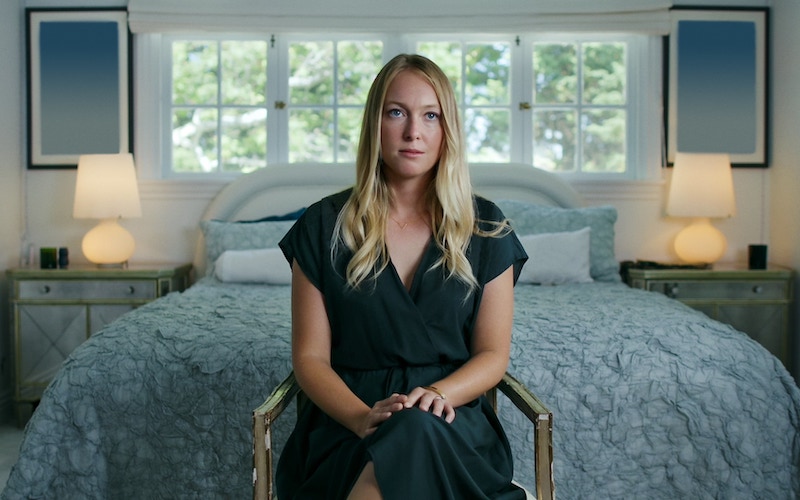 India Oxenberg being interviewed on Seduced: Inside the NXIVM Cult (Image from Seduced via Starz)

Starz’s Seduced: Inside the NXIVM Cult premiered the night HBO’s The Vow concluded its nine-episode first season that followed leaders in NXIVM after they left and worked to stop its founder and leader, Keith Raniere.

In the first few minutes of the Starz series, we saw one of The Vow‘s primary characters, Mark Vicente, preparing to film Raniere for a NXIVM video. While I was not one of those who found The Vow to be too long or drawn out, the territory felt so familiar that I turned it off; I’d had enough of NXIVM’s horrors for now. I was encouraged to watch by fellow TV critic Tara Bennett, and I’m glad I did. The Vow is, for me, still a superior unscripted TV show, but Seduced broadens its lens and fills in details, constructing a fuller picture of Keith Raniere and the damage he did via NXIVM.

Must The Vow and Seduced be in competition? Co-executive producer Inbal Lessner told IndieWire, “We wish this wasn’t seen as a competition. Our series stands on its own merits and has a lot to offer.” I agree, and it’s unfortunate that they’re being played against each other—yet I’m going to do here, too, because comparison was inevitable and is impossible to avoid. Obviously, the core subject matter is the same, and both are documentary series on premium cable channels whose broadcasts even overlapped on one night. Seduced also just happens to pick up one thread where The Vow left it: the story of India Oxenberg, whose mother Catherine spent the final episodes of The Vow trying to connect with her daughter and convince her to leave.

Both shows make it clear that Keith Raniere was a monster who did incredible damage; both have NXIVM leaders as their protagonists, people who worked alongside Keith after being seduced by him. But the difference between the shows is like the difference between watching a point-of-view video filmed onboard a rollercoaster, and watching a special about the development and construction of that roller coaster. They both have the same subject, yet they’re two completely different experiences.

Seduced (Starz, Sundays at 9) offers news clips of the Dalai Lama’s visit to Albany and tells us that NXIVM paid $1 million to make that happen. The Vow takes us to India with Keith Raniere and puts us in the room with both as NXIVM tries to convince Dalai Lama to make the trip despite bad publicity. The Vow has Catherine Oxenberg desperately texting her daughter; Seduced has Catherine Oxenberg sitting and talking about what happened.

Another key difference: Seduced was filmed afterwards: after India left, after Keith had been arrested, after there was some clarity that Keith and others would be held accountable.

The Vow was filmed before that—during the time when Sarah Edmondson went to the FBI and nothing happened. While I think it’s fair to critique its subjects—especially Mark Vicente—for what they did in NXIVM and how they’re using the documentary for their own self-interests, at the time much of it was filmed, the future of NXIVM was uncertain. They are wrestling with their own indoctrination and complicity in real time while also fearing for their own safety. (Raniere was just last week sentenced to 150 years in prison.)

What it lacks in access to the moment, Seduced has in information—although there’s plenty of wrenching footage, too, like a montage of Keith kissing followers on the lips, or his justification of sexual abuse (“Who abused who?”).

It does fill in horrifying details much more rapidly, and gives a fuller picture about the sickening things NXIVM did to people, and how that fits into a familiar framework that other cults have used. And it does that in about half of the time that it took The Vow to give less information.

That’s because executive producers’ Cecilia Peck and Inbal B. Lessner’s series is a much more traditional, straightforward documentary. There are experts in cults and NXIVM, journalists and lawyers, who provide context, and we learn more about how NXIVM’s methodology and teachings were just repackaged ideas.

Dr. Janja Lalich, a sociologist who runs cultresearch.org and has written about getting out of cults, offers succinct summaries of what was occurring. “Using that kind of misogyny was a way to get the women to hate themselves, in a way, and behave in a subservient way, which is what Keith Raniere was promoting,” she says at one point. In another, she says, “Cult leaders like Keith Raniere are very used to that kind of bad publicity, and so they will have a whole PR program to fight against it—they’ll say it’s ‘fake news’, they’ll have people come out and make statements. … and eventually the story fades and they’ve won.”

I appreciated learning more, though I can’t help but wish the information was packaged a little better.

Seduced uses India Oxenberg’s story as its through line, but since this filming began after she left NXVIM, she, and her mother, and other people are all talking about what happened in the past, and reconstructing it for us.

To have some footage, the show has to build its own narrative, and in its second episode, follows India as she travels back to Albany to stand in empty buildings. That’s not exactly riveting—though to be fair, listening to people’s phone calls, which The Vow had in abundance, could also be a slog. For me, though, those phone calls kept us in the moment with The Vow’s subjects—even when we were listening to something that happened in the past—whereas India standing in a parking lot and looking at Nancy Salzman’s parking space radiates its artificiality.

The delivery and writing is clunky, and echoed in the overly dramatic title cards say, “This series contains footage from anonymous sources. Some of this footage was never intended to be seen by the public.”

So much of that footage from inside NXVIM has now been seen by the public that I certainly felt I’d seen enough in The Vow. But Seduced makes a case for its existence by shining more light on NXVIM, and especially into the dark corners of the organization that The Vow never explored. They were conceived and produced separately, but they work well as companion series, each adding part of NXIVM’s disturbing history to the public record.

Seduced: Inside the NXIVM Sex Cult: B