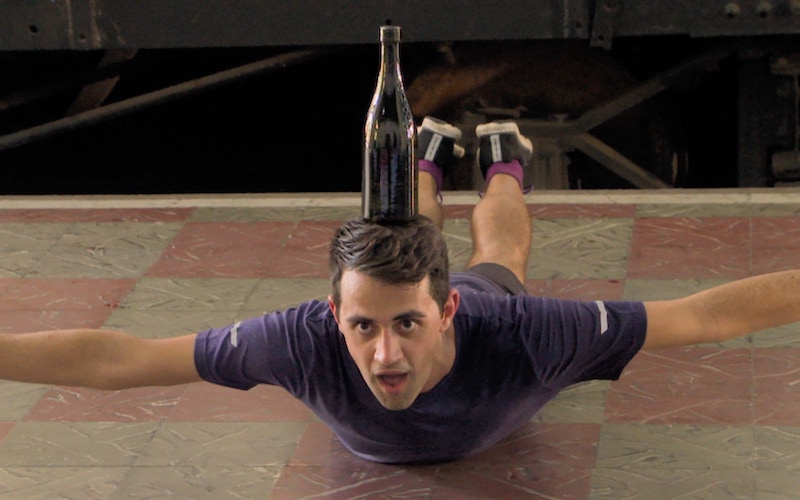 The Amazing Race 32 ended on an oddly flat note, with Kaylynn and Haley learning that they’d come in last on a non-elimination leg. It was much more dramatic to watch Gary and DeAngelo learn that they were not in last place.

The end felt like something was missing, and there was: an entire episode. The next leg of the race, when teams all fly to Paris, was supposed to immediately follow, but was postponed due to CBS News’s election coverage. Actually, the episode was preempted by CBS’s procedural SWAT, which was moved from 10 p.m. to 9 p.m. in order to clear the way for CBS News’s “Still Counting” coverage, because what is really missing right now is more people filling time on TV with no new information.

Both the Nov. 4 and Nov. 18 episodes of The Amazing Race are scheduled to be two-hour episodes—really, just back-to-back episodes. Tonight’s scheduled episodes were:

“Olé, Olé!” – Teams race through Asunción, Paraguay when they compete in a series of switchback Detours from season 20, where they must either stack a pyramid of watermelons or perform a traditional Paraguayan bottle dance, on THE AMAZING RACE, Wednesday, Nov. 4 (8:00-9:00 PM, ET/PT) on the CBS Television Network. Phil Keoghan is the host.

“You Don’t Strike Me as a Renaissance Man” – Teams are in Paris, France where they must whip up some tasty treats and make enough Crème Chantilly for four pies, as well as compete in a series of carnival games, on THE AMAZING RACE, Wednesday, Nov. 4 (9:00-10:00 PM, ET/PT) on the CBS Television Network. Phil Keoghan is the host.

Only the first actually aired, opening with teams leaving the pit stop. Two hours and 46 minutes separated first-place Will and James and last-place Alana and Leo. But since they were in Brazil and the next leg was in Paraguay and every team has to be on the same flight, that was erased. “We are so thrilled to find out that there’s only one flight and we’re all going to be on it,” Alana said. “So our last place is gone.”

I’d be excited, too; as a viewer, it’s frustrating that we’re basically just watching weekly sprints, not a race around the world.

Meanwhile, the editing and frankenbiting worked overtime to try to stoke drama between Will and James and Leo and Alana, including obviously out-of-context reaction shots.

But this episode was gloriously, nearly free of any kind of inter-team drama. Oh sure, members of the alliance helped each other with a few tips at the Roadblock, but that didn’t seem to make a whole lot of difference. A Yield showed up, and no one used it.

Instead, the drama came from the three challenges—two of which were “Switchback” challenges, The Amazing Race’s clever way of turning recycled challenges into a thing.

The Detour offered the option of doing a Paraguayan bottle dance or stacking watermelons into a pyramid. Both of those appeared in The Amazing Race 20’s third episode, but not as part of a Detour. Instead, its Detour was a choice between the watermelons and properly stringing a harp. That latter challenge wasn’t exactly repeated on The Amazing Race 32, but the Roadblock was very similar, as one team member had to construct a cello out of recycled material and properly string it. (The Orquesta de Instrumentos Reciclados de Cateura was featured in a documentary, if you want to know more about it.)

All three of these challenges were, well, challenging. The cello Roadblock had to be built to exacting standards, and also strung so it could be played. It took Kaylynn nearly four hours to complete it.

It turns out that Will and James had actually prepared for the bottle-balancing dance challenge before they left home, having just re-watched season 20—smart preparation, like Spencer memorizing Survivor puzzles—and they still struggled, that’s how hard it was. Still, they came in first for the second leg in a row.

Gary and DeAngelo seemed to have an edge with the watermelon pyramid, thanks to their strength and throwing abilities, since the watermelons had to be retrieved from a truck. But they really struggled stacking their watermelons, and missed the details of how they were stacked, so their pyramid kept collapsing. They took almost four hours, and were easily surpassed by Hung and Chee—who’d started with bottle balancing and gave up, switching detours. Hung and Chee are quite a force as a team, though this episode really wanted us to know that they don’t communicate well, even though they did just fine.

The only other obstacle in the episode turned out to be cab drivers who didn’t know how to find the orchestra.

What was interesting is how Michelle and Victoria’s cab driver just told them to get in another cab—and how quickly Will and James jumped out of their cab when they realized their driver didn’t know where he was going.

The show seemed to get some unfortunate mileage out of teams wondering where they were going—they assumed an orchestra would be in a nicer area of town—but the episode tilted toward visibly ugly only once, as Kaylynn and Haley’s cab driver stopped to ask for directions at a house. Based on the way they were freaking out and expressing their fear, you’d think their cab driver drove them onto the set of Hostel Part 32. We’ll see where they end up next week—if being last place affects them, or if we’ll just go back to square one yet again.