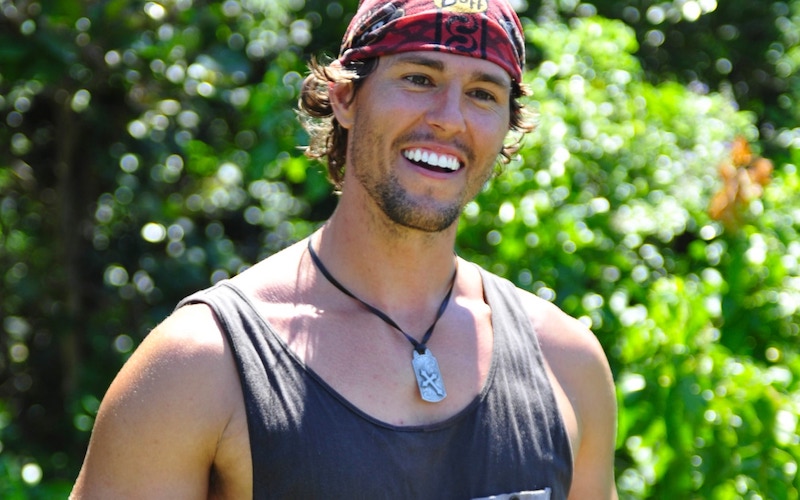 Hayden Moss was originally recruited for Survivor before being moved to Big Brother, which he won. He did eventually compete on Survivor, during Survivor Blood vs. Water, and is pictured here during episode 2. (Photo by Timothy Kuratek/CBS)

Jodi Wincheski started casting for Survivor a decade ago, and the first person she discovered was Hayden Moss, who she noticed on an airplane. CBS decided to put him on Big Brother instead, and he won BB12. A few years later, he was cast on Survivor again, for Blood vs. Water, season 27.

Some of Survivor’s most iconic contestants have been recruited in similar ways, whether they’re on airplanes or in Venice Beach bars. The process goes all the way back to Rudy Boesch in season one, and includes eventual winners (Brian Heidik, Yul Kwon, Bob Crowley, Tyson Apostol, Natalie Anderson) and memorable characters (Jonny Fairplay, Phillip Sheppard, Jessica “Sugar” Kiper). Whether recruiting is a good idea or not has been passionately debated over the years, and I’ve found myself both annoyed and wildly entertained by recruits, both as characters and players.

When I was searching for examples of recruits, I found this amazing spreadsheet created by a Redditor which documents who was recruited, who applied, and who applied for CBS’s other reality shows (like Big Brother and The Amazing Race). It was created five years ago but has been updated for all seasons since then. Just scrolling through, you can see how recruiting reached a fever pitch about 10 years ago, with the majority of some casts being recruited, while it’s faded in recent seasons.

Jodi Wincheski, who’d competed on The Amazing Race season 17 with fellow Southwest Airlines flight attendant Christie Volkmer, was asked by Lynne if she wanted to help with casting.

“What do you need me to do?” Jodi asked Lynne, who “said she was looking for some specific types of people and asked me to find them. And so I did. I just turned in, I don’t know, 10, 12 people in the next couple of weeks, and she was like, Oh my god, these people are great. Where did you find them?“

With Hayden, her first find, she said CBS executives realized, “we really just think we’d like him better on Big Brother. And so I called him up and we talked about it. I’m like, Dude, I think you should do it. You might as well take advantage of what you can. And then he ended up winning it.”

Jodi, who was still working as a flight attendant, went from helping part-time to becoming a full-time casting producer, working not just on Survivor, but also The Amazing Race. She eventually began traveling, helping with the contestants before production, or taking those voted out of pre-jury Survivor on vacation for the rest of the 39 days. “It ended up being an 11-year career,” she told me.

Casting has “changed a lot over the years,” Jodi told me. (She’s no longer a Survivor casting producer, which we’ll get to in a moment.)

The primary change: “We only do fans now; we don’t really recruit,” she said. Now, people apply online or at open casting calls.

From those applications, casting producers “find the people that you like, and we call them up and talk to them,” Jodi explained. “We help them develop a great pitch video” and do other work, such as “tons and tons of background” research.

“Then we pitch them to our team first. Each casting producer picks their best people and pitches them at a pitch meeting, which means that the entire team watches your people’s videos. We all vote, so everybody has to agree: Yeah, they’re great. Let’s put them through,” she said.

The final decision to send someone to the next round is made by Jesse Tannenbaum, who’s led the Survivor casting process since Spillman was fired. “Jesse’s ultimately, now, the deciding factor, to say, Yeah, this one’s going through,” Jodi told me.

The next decision-makers in the process are the two people in charge of Survivor itself: showrunner Jeff Probst and executive producer Matt Van Wagenen.

“They decide from on the video if they’d like to Skype with them. And now you have to get through Skype with both Jeff and Matt to be invited to finals. Finals are much smaller and they really only bring people they really think would be on the show,” Jodi said.

(For insight into how the finals casting process works, read this behind-the-scenes story about Big Brother’s finals casting, which is functionally the same as Survivor’s.)

Why Survivor no longer recruits players

I asked Jodi why, as she said, they “only do fans now” in casting. Is it because there are enough fans applying on their own, and there’s no need to find players?

“No, not necessarily,” she said. “It’s just that Jeff and Matt—well, everybody working on Survivor—they really just want people who really know the show and are going to be good strategists. … That’s the way they’d rather go, [rather] than finding somebody and then having them cram and become a fan.”

“Having them cram” refers to casting getting contestants up to speed on Survivor and its game, mostly by watching a past season season of the show. That makes it possible for the potential player to, for example, answer questions about how they’d play, especially during finals casting, when they’re facing producers and network executives.

That process obviously worked for characters from Rudy to Yul, but it can also backfire. “I think [Survivor has] just gone more strategic, and they just want people that can be strategic and know how to play,” Jodi said. “They just had a few people that were recruited, where they just didn’t feel great about it when they were finally on the show.”

I asked if the shift occurred because of Lynne’s exit. “The direction did change a bit when Jesse replaced Lynne as far as what Matt and Jeff want. Matt and Jeff, I guess, they wanted something specific either way, and it was just more enforced once that change happened. It definitely went more toward the only-fan thing,” she said.

Now, Jodi said, casting producers do reach out, but it’s only to find fans and encourage them to actually apply. “We just scour through and try to get more and more people to apply, and really try to be out there to get people that are fans to apply,” she said. “It’s just better television when you have people that really know the show.”

Help with applying from a former Survivor casting producer

Look around the Internet, and you’ll see fans of shows like Survivor blaming casting producers like Jodi—and in some cases, Jodi herself—for a specific character behavior or existence on a reality TV show. I asked Jodi about that criticism.

“It’s silly, to be honest,” she said. “There are certain [fans] that just, you know, hated the hot people. Well, you know what, there was a point where that’s what we had to do, because that’s what the network wanted. That has changed, and it’s a great change, but it was definitely a requirement. And when your job is to do what they tell you to do, or find what they want, you do it.”

She explained that, “When I first started, we were recruiting. I was told, go find this person, and that was all I was allowed to find. You get what they ask for. Now, I think it would be different—just my casting in general is very different than it was when I started, because I don’t have that same criteria. In the last few years, I’ve had a complete database full of people, I can get all different types and characters, and it’s not based on any specifics about what they look like or what they do for a living.”

Jodi is no longer working on casting Survivor—or any other show. “I’m not going back to casting for Survivor. I had 22 seasons there, and it’s been amazing, and I’ve loved it,” she told me.

Now, she’s using her expertise to help people who are applying for any reality show.

Jodi created Casting Reality, which offers video reviews, preparation for Skype interviews—like the ones potential Survivor players will do with Jeff Probst—and other services.

Starting the business, she told me, “was an accident. I was constantly—when I say constantly, I mean every day of my life—contacted … asking me to please look at their video, to give them advice, what can I do to help them. This was when I was not on staff.” She added that, “When you’re getting paid to it, that’s one thing, but when you’ve got five people a day and you’re not getting paid at Survivor at that time because you’re off, it’s a lot of work.”

“With my new business I can” help, she told me. “It’s great because I can work with all different types of people and help them make their best possible video. What is their best strategy? What are their best things?”

And that’s allowed her to help many more people than she was ever able to do while part of formal casting processes. Jodi brought Survivor: Caramoan’s Allie Kendall on to help. “She was also on reality TV, so she gets it,” Jodi told me. “She’s really good at feedback.”

Jodi launched the business in August, and the response was “a lot more than I expected,” she said, “because I hadn’t made a whole lot of effort to get the word out there.”

About 60 people signed up to get her help in that first month. “They send me videos, I send them back some questions, I get to know people,” she said. “We talk about what would be best to put in their video, they send it to me, I check that out and make suggestions on anything they might be missing or should change until they’re done.”

While parts of this feedback mirror what she did in her former job, and help someone get cast, she’s clear to people who that she’s not employed by the show any more: “that would be a conflict.”

“To be clear, I’m not going back to Survivor, I’m fully invested in my new business,” she told me. “And I make it clear, too, it’s not just for Survivor,” but all kinds of reality TV shows that she can help with.

“Basically, I’m doing the same job I did at Survivor,” Jodi said, and then laughed, “although I’m a lot more helpful.”