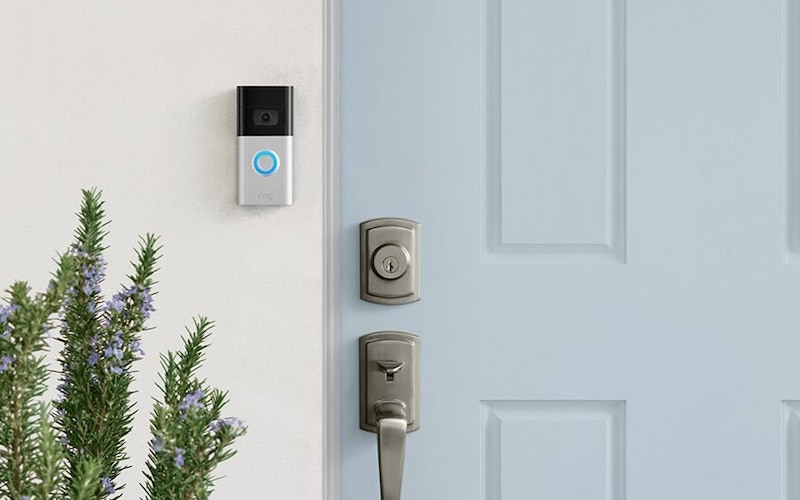 Shark Tank is my QVC: I love its parade of mini-infomercials, which are very often successful at convincing me that I just cannot live without the product being pitched. Occasionally, I’ll buy something for myself, but more often I use the show to find ideas for gifts. I might not need a Burro Buddy, but I know who does! Instead of going to the mall at Christmas, I shop throughout the year Friday nights on ABC.

But the past seven months, as I’ve been talking many more walks through my neighborhood, I’ve been constantly reminded of what I think is the worst product in Shark Tank history. It’s everywhere, staring at me: cold white LED circles hovering next to people’s front doors which are watching, and possibly even recording me as I just walk down the sidewalk.

The circles belong to Ring, a doorbell. Its inventor, Jamie Siminoff, pitched Ring to the sharks in 2013, though it was then called it DoorBot. He left without a deal, having asked for $700,000 for 10 percent of his company, valuing it at $7 million. Kevin O’Leary did make one of his dumb offers, offering a loan in exchange for a royalty and equity, and when Siminoff declined, O’Leary followed it up with the line he still thinks is clever: “you’re dead to me.”

Ring was not dead. Since its appearance as DoorBot, Ring has become one of the most-successful brands to appear on Shark Tank, even though it didn’t get a deal. The company got attention and investment, and in early 2018, Amazon bought Ring for $839 million, though that price was initially reported to be $1.2 to $1.8 billion.

That’s obvious success. But I suspect we don’t really know the true cost yet: to our communities and even to our own sanity.

I did not always think that Ring doorbells were awful. When brainstorming ideas for a present for a relative a few years ago, it popped into my mind: Oh! How about a Ring doorbell? We bought one and wrapped it up.

And really, it’s such a cool and simple idea: being able to see who’s at your door without actually being on the other side of your door, whether you’re in the bathroom or on vacation.

Let’s just start with a simple problem: Ring didn’t protect the privacy of people who owned its doorbells, and what their cameras were recording.

In December 2018, The Information reported that, starting in 2016, “Ring’s Ukraine employees were given access to a database of customers’ video history” that included “personally identifiable video” and “images from security cameras pointed at home entrances across the globe that could be traced back to individual customers.”

The Intercept reported that employees had “virtually unfettered access to a folder on Amazon’s S3 cloud storage service that contained every video created by every Ring camera around the world” and “a corresponding database that linked each specific video file to corresponding specific Ring customers.”

Worse, “videos were transmitted there unencrypted,” The Information revealed, noting that “Ukraine is viewed by security experts as both a source and a victim of cyberattacks.” (Ring now says its videos are encrypted, but wouldn’t say when it started encrypting them.)

Ring’s own terms of service give it the right to “access, use, preserve and/or disclose your Content to law enforcement authorities, government officials, and/or third parties, if legally required to do so or if we have a good faith belief that such access, use, preservation or disclosure is reasonably necessary.” They then list several reasons, including the very vague “protect the rights, property or safety of Ring, its users, a third party, or the public as required or permitted by law.”

But there are other, bigger problems with Ring.

Ring has a feature called Neighbors, which is both part of its main app and also available separately, and is advertised with a photo of a happy white family on a page that says, “When communities work together, safer neighborhoods become a reality. Connect with your neighbors and stay up-to-date with what’s going on in your neighborhood.”

That sounds really nice—although if you’ve ever looked at NextDoor, you know that connecting with your neighbors on an app usually means wading into a toxic cesspool that will make you terrified of the insane and paranoid people who live nearby. (Best of NextDoor collects some of the more comical posts, though they are often quite disturbing.)

You can probably guess how well that goes, with people turning themselves into investigators and doing things like calling the police because they saw someone drive down their street.

Someone on Reddit said, “People in my neighborhood are posting Ring videos of neighbors walking dogs at their curb (poop wars) and kids innocently overstepping the boundaries of their front lawns. They rant, rave, and threaten to track down the offender to ‘teach’ them how to be good neighbors.”

Is that how “communities work together”? How many people have reported me when their cameras alert them that I am walking down the sidewalk at night? I am white, and walking while white is not as much of a “suspicious activity” as walking while black.

While the anecdotes are disturbing, there’s data, too. Vice analyzed two months worth of Neighbors reports and found “posts on Neighbors disproportionately depict people of color, and descriptions often use racist language or make racist assumptions about the people shown.”

Ring now provides a map to see if your local law enforcement participate, and “has pushed aggressively to secure new police allies.”

Police “can use a special ‘Neighbors Portal’ map interface to designate a time range and local area, up to half a square mile wide, and get Ring to send an automated email to all users within that range,” the paper reported, noting that a Ring owner “can click to share their Ring videos, review them before sharing, decline or, at the bottom of the email, unsubscribe from future footage-sharing requests.”

But having a Ring doorbell advertises that you have footage police might want to obtain. As the Post noted, “Some officers said they now look for Ring doorbells, notable for their glowing circular buttons, when investigating crimes or canvassing neighborhoods.”

The product review site Wirecutter noted that, “Even though Ring claims that Neighbors is an ‘opt-in’ program, in reality you’re automatically enrolled when you sign up for a Ring account.”

Although Ring “sought to keep key details of its police-partnership program confidential,” as the Post noted, an Amazon executive told Wired earlier this year, “I’m proud of that program, and I think we’ll continue to do it. If anything we’re putting more resources on it.”

As a letter Senator Edward Markey sent to Amazon CEO Jeff Bezos says, all of this “could easily create a surveillance network that places dangerous burdens on people of color and feeds racial anxieties in local communities,” especially since “Ring is pursuing facial recognition technology with the potential to flag certain individuals as suspicious based on their biometric information.” Since there is “evidence that existing facial recognition technology disproportionately misidentifies African Americans and Latinos,” he wrote, that “has the potential to catalyze racial profiling and harm people of color.”

Some of these features might be very useful, to homeowners or law enforcement, especially in situations where there are actual crimes.

Ring and Neighbors, the Electronic Frontier Foundation wrote, “can create an illusion of a household under siege. It turns what seems like a perfectly safe neighborhood into a source of anxiety and fear. This raises the question: do you really need Ring, or have Amazon and the police misled you into thinking that you do?” And ultimately, that fear is being used to make a company richer: “police promote the adoption of Ring, Ring terrifies people into thinking their homes are in danger, and then Amazon sells more cameras.

Like so much of our technology, from Twitter to iPhones, Ring seems like a good idea in theory—to me, too—but is one that has expanded and grown without any checks on its power, and now it’s suddenly everywhere and causing real damage to people’s lives.

Ring convinced people to not just install Big Brother’s live feeds—or Big Brother’s telescreens—themselves, and to broadcast that to the world, but to pay $100 to $250 (plus an optional monthly subscription) for the privilege of sending high-definition live video of the world to their paranoid neighbors and even to police.

For me, that makes it the worst product to come through Shark Tank doors, and one I’ll certainly never buy again.

This story was updated to clarify that Siminoff did not get a deal from any shark, not just Kevin O’Leary.