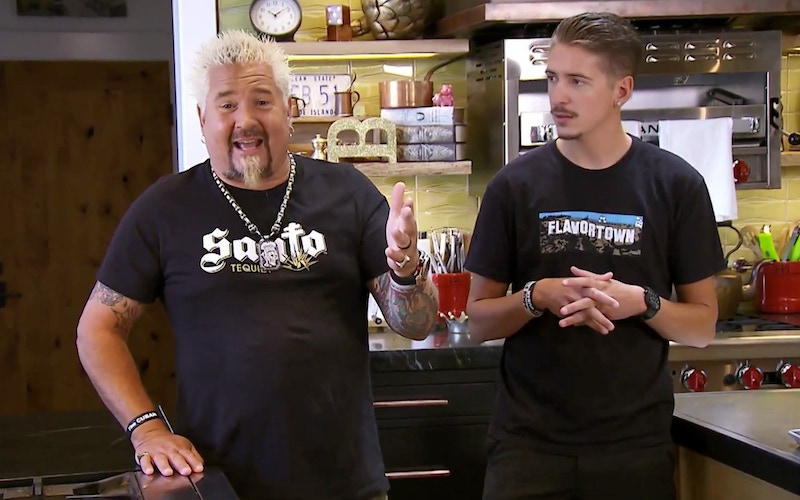 When Top Chef first premiered 14 years ago, I was critical of its premise, wondering how we’d be able to judge the contestants’ work, like we could on Project Runway. With a cooking competition, we’d have to rely on proxies (the judges) to tell us how things actually tasted. Obviously, they figured it out, and I’ve gotten so used being told how something tastes that when Guy’s Grocery Games premiered a new version in which the judges evaluate food without ever tasting it, I barely flinched.

Guy’s Grocery Games: Delivery transplants a competition that usually takes place on a grocery store set to its judges’ homes. These new season 25 episodes follow Guy’s Grocery Games almost beat by beat, even though they’re not taking place in a grocery store. Instead, they’re being filmed in seven different locations, including the contestants’ own kitchens. But by staying true the original competition’s structure, this is far more successful than I imagined it could be, and one of the best remotely filmed shows I’ve seen.

These new episodes should not be confused with self-shot reality TV. The earliest—and, as it turns out, one of the best—filmed-at-home reality shows was Food Network’s Amy Schumer Learns to Cook, on which Schumer’s husband, the chef Chris Fischer, prepared food with her help. Whether you found this entertaining or not is directly proportional to how entertaining you find Amy Schumer, because while they did offer cooking tips, most of the show was her improvised reactions and witty asides.

That show was not actually self-shot: Instead, it was filmed like Big Brother, with someone remotely operating cameras that’d been fixed around their kitchen. The show pretended it was being filmed by Amy Schumer and Chris Fischer’s nanny, Jane, as she leaned against the counter and bobbed a camera around in her hand. That turned out to be about as useful as Max’s camera on Catfish, which is to say that the editors rarely use any footage from it, relying instead on the clearer images from the cameras placed around the kitchen.

Guy’s Grocery Games: Delivery is also not self-shot, and is much more like a normal TV show. While the judges appear via a Zoom-like interface, and appear to be filmed by webcams, the chefs and Guy Fieri all have actual human camera operators in their kitchens. Oddly, there are zero camera operators listed in the credits, though they are obviously there, both from the fluid camera work and the two masked camera operators clearly visible in Michael Voltaggio’s kitchen. (Perhaps they’re credited as producers? Or not credited at all?)

The chefs look at a large-screen TV showing live feeds, but they are also wearing professional IFB ear pieces, and there are professional light rigs set up in their kitchens. This is just reality TV filmed inside people’s houses, which is nothing new.

If the production is just going to use camera crews, why bother filming remotely at all? Back in August, Guy told Fox News that “we couldn’t bring everybody into the studio because we have 150 people to pull that show off. So we’re doing a new show right now called ‘Triple G Delivery.'” It’s obviously much safer to have fewer people in several locations than hundreds in one location—and also probably a lot less expensive. (Star Trek: Discovery, for example, is spending $300,000 to $500,000 per episode on safety alone.)

Instead of running through the aisles of Flavortown, the grocery store set, the chefs receive huge boxes full of ingredients. These are allegedly from Flavortown, though I recognized a bag of cashews from Trader Joe’s.

The ingredients inside are cleverly packaged to match up with challenges from Guy’s Grocery Games. For the alphabet game, the box contained individual packages, each containing food that started with one letter. In another episode, the boxes had false bottoms with beautiful produce on top and packaged, canned food hidden underneath. The chefs had to use that, not the produce, in their dishes.

The games are introduced in the same way, and some of the show’s regular set pieces, such as the Plinko-like pyramid, were even transported to Guy’s house. And each chef’s box contains both an advantage and a disadvantage for the second round. Those are concealed in envelopes that get opened only by the first round’s winner and loser.

The biggest departure from the normal show—besides the multiple locations—is that Hunter Fieri, Guy’s son, is there with him co-hosting. Hunter and others have appeared occasionally on Guy’s Grocery Games to help introduce a challenge, but never had the kind of sustained presence he has here.

I wish Guy wasn’t trying so hard to make Hunter happen, mostly because I’m embarrassed for him. I cringe on Hunter’s behalf, remembering when I was a teenager or even a young adult and my parents took me to their office, and I could just sense how people were responding to me because of my parents.

Hunter just doesn’t seem like he’s comfortable, fidgeting awkwardly and barely reacting, although it certainly doesn’t help that his co-host father is one of TV’s best hosts, projecting energy and enthusiasm for even the littlest of things.

It also doesn’t help that Hunter has been enlisted to be part of little scripted bits, like interrupting Guy during the countdown so they can give the chefs a challenge. Most people on reality shows can’t pull off those kinds of fake moments, and here it just triples the awkwardness.

So how exactly does a remotely-filmed cooking competition work? The judges watch, and then score each chef based on four criteria: Game play (15), creativity (15), plating (10), and taste (10). The scores are averaged and added, and the winner across two rounds gets to play for $20,000: perhaps answering trivia questions, or just getting cash after Guy spins a wheel.

The judges (Aarti Sequeira, Justin Warner, Troy Johnson, Maneet Chauhan, among others) are not actually tasting the food—that’d be impossible—but they do offer the same kinds of critiques that they would if they were sitting together at the judges’ table on the set.

The tasting is done by the chefs. Yes, they’re tasting their own dishes and describing them. Since the chef contestants are all Guy’s Grocery Games judges themselves, they know how to do this very well.

Even though it’s very weird to have a contestant in a competition describe their own food, that gives the episode the same tasting moments that normal episodes have—and some great moments of levity as the contestants talk up their own successes. It’s actually a little more awkward to hear the actual judges try to evaluate dishes, especially when they’re assessing how well something worked or didn’t work; they’re making educated guesses, not evaluating physical evidence.

The contestants who’re subjecting themselves to these challenges are all familiar Guy’s Grocery Games and Food Network personalities—Brooke Williamson, Antonia LoFaso, Jet Tila, Aaron May, and Brian Malarkey, for a few examples—most of whom have competed on the show before, never mind on other shows, like the terrific Tournament of Champions.

Having the judges attempt the challenges that they’re usually judging usually makes for good TV. Seeing them in their own kitchens, playing along with the constraints and the ridiculousness, adds another dimension to them as TV characters. Now they’re not just familiar faces behind a desk passing judgement, but real people who we’ve gotten to know in their own homes. Add that to real competition, and Guy’s Grocery Games: Delivery makes for a rather satisfying show.