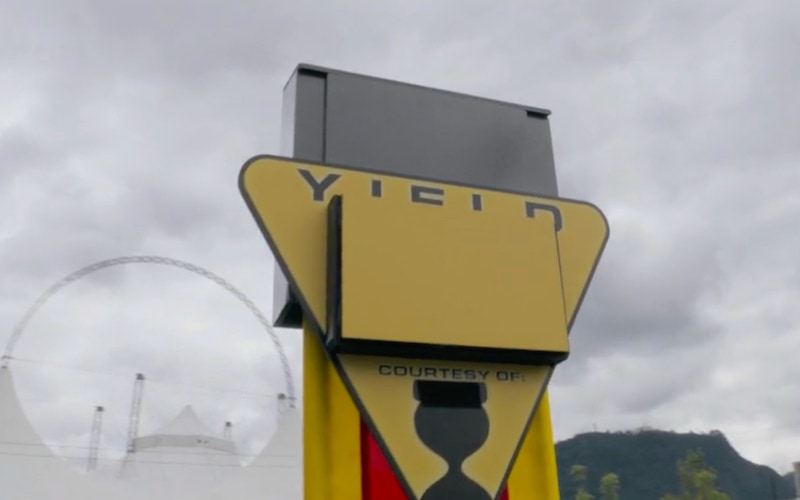 The Yield, which last appeared 21 seasons ago, was back on The Amazing Race 32, before the Roadblock challenge. No one used it. (Image from Amazing Race)

The 11 teams on The Amazing Race 32 began their race around the world last week with such exuberance, as if they knew that they’d been kept on a shelf for two years and it was finally time to take off.

It was a great rush and a fun first episode. I just wish those teams were given an actual race to run, instead of whatever this is.

I suspected that all the teams would be on the same flight to Colombia, thereby completely resetting the race and making it absolutely pointless to have them keep racing after seeing Phil at the mat, because they weren’t racing, they were just going to get on a plane together.

When teams arrived in Colombia, they visited gorgeously lit salt mines—where they once again were stopped and equalized. They had to sign up for one of two departure times, separated by 30 minutes. (Remember when teams would leave from a pit stop at different times, based on when they actually arrived?)

The teams couldn’t sign up for a time until they found an hourglass, which was marked with either 10 or 20 minutes. These hour glasses are for use with the Yield, which makes its return after a 21-season, 13-year absence. Yes, it’s was The Amazing Race: All-Stars in 2007 when we last saw the Yield.

Alas, after 13 years, it will have to wait another day: No one used the Yield, and saved their hourglasses—which will determine how long the yielded team has to wait—for another day.

The minor complication presented by that scavenger hunt was presented when a team found a 10-minute hourglass. Should they keep searching for a 20 and risk being in the second departure group? Their choice was basically to 1) be 30 minutes ahead of half the other teams, or 2) have the future option be able to slow down another team an extra 10 minutes.

As Eswar said, “We luckily made the right decision to just take the first hourglass we could find.” Absolutely, that’s the right choice. The only way it’d make sense to spend time looking for a 20-minute one is if the first five slots were already filled.

The teams spent the night in the salt mine, once again all equalized, though this time separated into two groups that wouldn’t really shift much for the rest of the episode. Remember when teams actually raced around the world? I miss that more than the Yield.

For the second leg in a row, there was no Detour challenge. I guess creating two challenges, one of which might be ignored, is just not worth the time and resources it takes to create one for each leg. The Detour is back next episode—but alongside the Double U-Turn, because why just let the teams have agency when you can also add some interpersonal drama?

There were other challenges teams had to complete as part of “Route Info” clues. I think the Race just needs a new term for these kinds of non-Roadblock, non-Detour, non-Intersection, non-Speed Bump tasks, because the producers are just using Route Info as a catch-all instead of as actual information about where to travel next. What about “Road Work Ahead”?

The only real obstacle any team faced was the Route Info challenge at the end of the leg. It told them to decorate a dump truck to match a model, and also told them to connect the truck’s horn. Many teams made that “rookie mistake,” as James described it, of forgetting about the horn. He and Will were not the only team to miss that.

The chaos of this task created some of the episode’s more entertaining and character-driven moments, like Chee thinking the problem was their failure to tighten nuts so they were flawlessly flush against the truck’s surface, or Hung discovering that her height was an advantage in this challenge. (I love that Hung and Chee came in first for the second episode in a row.) It also was the only source of tension as teams got irritated, though that was all quickly resolved.

The teams’ error was conveyed was classic subtle Amazing Race editing: a cymbal crashing and a zoom-in on the truck’s disconnected horn, again and again and again, just in case you missed it the first 38 times. It’s like it was edited to be watched on Quibi (RIP).

The earlier Roadblock was held at a circus, and the team member had to attempt the wheel of death (be rolled across the floor for a few seconds) and walk on a tightrope (while holding another rope for balance). These tasks presented a challenge to absolutely no one, except maybe Alana, who dropped her wine bottle after a few steps and had to start again.

At least that required effort, and may have been thrilling to actually do in real life, even if it didn’t make for a great reality TV challenge. The previous Route Info challenge, though: It only required teams to pick up a thing and drop off the thing.

Seriously: You have the teams climb an old bell tower and the only thing they have to do is pick a thing out of a basket like it’s Halloween and the person can’t be bothered to answer the door so they just put out some candy and a sign saying Take one? That’s it?

What came next, though, was just bad: Teams had to pick a marked cab, and then be driven into Bogotá. Kellie and LaVonne got a cab driver—selected and cleared in advance by the production—who didn’t know where he was going and whose phone was dying and who had no charger.

Did the cab cause Kellie and LaVonne to arrive last? Probably not; they were also one of the teams who didn’t figure out the horn situation, and could have passed one of the other bottom-three teams at that point. Am I annoyed that one of my favorite teams was delayed and perhaps frustrated because the producers chose a bad cab driver? Yes.

When if the only travel-related obstacle in an entire leg of The Amazing Race is traffic and taxi drivers chosen by producers, I don’t find that very amazing, and it certainly doesn’t make for much of a race.