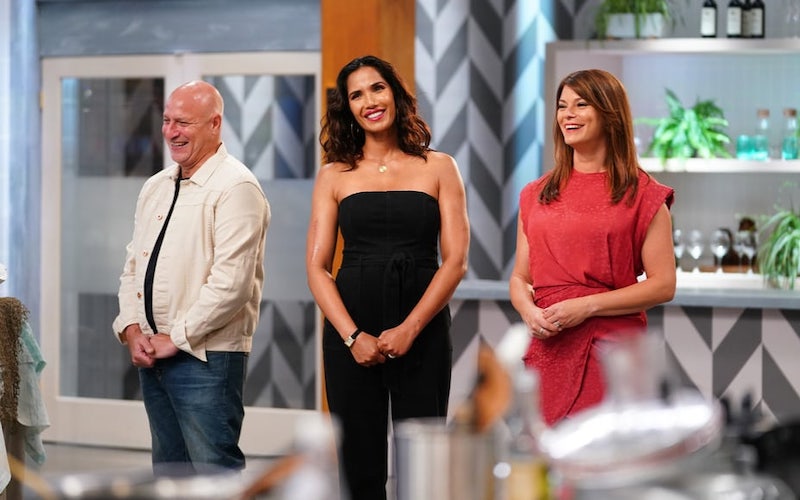 Top Chef season 18 is in production, as the Emmys telecast on Sunday revealed, and is calling Portland, Oregon, home for this season.

During the Emmy broadcast, before RuPaul accepted the Emmy for outstanding reality show competition, we saw a brief look at the remote feeds of three of the five nominees. Both Nailed It! and The Masked Singer were just represented by logos on the screen, but we could see someone from The Voice, RuPaul, and the set of Top Chef.

Top Chef‘s feed was from a camera perched far and away, but there was a very clear look at the judge’s table, with a cluster of people, wearing masks, standing behind it.

The judge’s table was much, much wider, and was in what looked like a pretty typical Top Chef kitchen. A box with the Emmy logo on it was sitting in the center, and would have opened to reveal an Emmy had the show actually won. (RuPaul’s Drag Race won for the third time in a row.)

You can see that in this video clip, at the 37 second mark.

Is the show in production now, filming like so many other reality shows despite the risks?

Yes: I’ve confirmed that season 18 is now in production. Casting took place between April and June, and production is taking place between August and October, according to multiple postings online from various crew members.

But where is it being filmed? When I asked on Twitter, I heard privately from someone who’s friends with a crew member, and that person was told it was in Portland.

While I couldn’t independently confirm that, on Aug. 31, Top Chef head judge Tom Colicchio tweeted, “I can confirm that Portland is not on fire.” That was a response to President Trump saying of Portland, “The entire city is ablaze all the time.” (That claim was fact-checked and found to be false; there were some fires set during protests in Portland, but those—just like the mostly peaceful protests—were isolated.)

If Tom Colicchio is in Portland at the same time Top Chef crew members say they are filming a new season, that seems like a potential clue.

Top Chef has filmed in multiple locations during one season, like when it traveled around Texas, but this year, that seems particularly unlikely, since travel creates additional risk and exposure.

The day after Tom tweeted, Sept. 1, was Padma’s 50th birthday, and she tweeted, “Champagne Padma will be here soon!” That’s a reference to last season, Top Chef All Stars LA, when Padma and guest judge Jonathan Waxman had champagne during the quickfire challenge.

While Padma could just be drinking champagne for her birthday—her post was hashtagged with #birthdayvibes— she also hashtagged her post with #topchef. Did that reference the fact that she’s filming now? And will champagne Padma be showing up on season 18 of Top Chef, too?

Bravo has not yet announced the new show, but that’s fairly typical in reality TV, with shows filming their entire seasons and networks making announcements much closer to that reality show’s premiere date.

This new show will be the fifth competition to spin off of Top Chef, and the sixth spin-off overall, not counting web series like last season’s terrific What Would Tom Do? But what it is, exactly, isn’t yet clear from the public information.

Will it be a version of Top Chef, just with amateur contestants? A casting notice asked:

Are you a Top Chef Super Fan?

Do you experiment and try to replicate the dishes made on the show?

Do your dishes have a reputation of being refined and elevated?

Are friends and family often impressed by your skills even though you are a home cook?

Do you ever watch the show and think, ‘I could do that … or better!’

The application itself says filming will take place “for approximately ten (10) days or possibly longer or shorter around October 2020 and November 2020,” though, as always, that’s subject to change.

That’s a quick production window, shorter than a typical Top Chef season, though the application also says contestants must “be willing to travel to various locations as part of production,” so perhaps it won’t just stick to a studio.

Update, Sept. 28: The headline and lead of this story have been updated to reflect what Bravo confirmed today: that Top Chef is filming in Portland, with a group of all-star chefs.