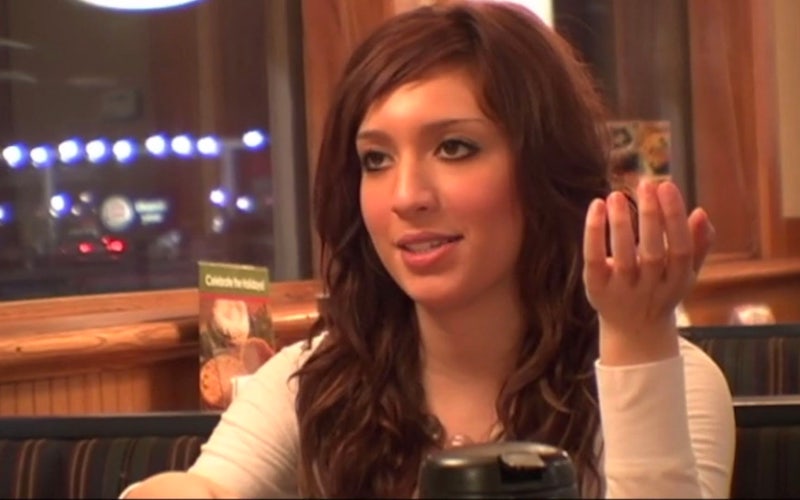 Announcing its new documentary series, 16 and Recovering, MTV said in a press release that it is “a brutally honest wake-up call in the tradition of 16 and Pregnant, which helped reduce teen pregnancy to record lows.” Yes, MTV is saying that the reality show that spawned an entire franchise, Teen Mom, which has consistently generated ratings and celebrity gossip, affected teenagers’ behavior.

“We lowered teenage pregnancy,” MTV’s Chris McCarthy told Deadline last year, while talking about a different show, Border Life, which he compared to 16 and Pregnant. “It’s sort of like with 16 and Pregnant. Some people felt we were trying to exploit the problem. But over time, working with various groups, we lowered teenage pregnancy. We hit a cultural nerve. This show’s going to do the same thing.” (I don’t think Border Life ever aired; at least, I couldn’t find any evidence of it, even under different names.)

But 16 and Recovering premieres tonight (MTV, Tuesdays at 9), following, over four episodes, students struggling with addiction who all attend Northshore Recovery High School.

Suggesting a reality show can alter behavior is a pretty big claim—but it’s one that’s been repeated over the past decade. In 2010, I reported on a survey by The National Campaign to Prevent Teen and Unplanned Pregnancy that found 16 and Pregnant helps prevent teen births, because a majority of teenagers said that watching pregnant teens on TV “makes me think more about my own risk of becoming pregnant/causing a pregnancy and how to avoid it.”

In its 16 and Recovering press release, MTV cites its source for that claim: a paper from the National Bureau of Economic Research. That’s a study that generated headlines in The Washington Post and CNN, among other places.

“Using data from numerous sources, we have examined the impact that the MTV show, 16 and Pregnant, has had on rates of teen childbearing in the United States. We find that exposure to the 16 and Pregnant franchise of shows had a sizable impact on the rate at which teens give birth in the United States, generating a 4.3 percent reduction in teen births that would have been conceived between June 2009, when the show began, and the end of 2010. That reduction can account for 24 percent of the decline over that period. Data from Google Trends and Twitter offer supportive evidence suggesting that the show influenced attitudes, in particular, raising teens’ interest in birth control and abortion. We do not have sufficient data to carefully evaluate the role that more contraceptive use or more frequent use of abortion played in contributing to this effect. We do know, however, that aggregate abortion rates for teens were also declining over this period (Pazol, et al., 2013), suggesting that a reduction in pregnancy is the likely mechanism.”

It was, as Wellesley College said in a press release, “the first study to offer a credible estimate of the causal effect of specific media content on teen childbearing rates.”

A 2017 follow-up in the Journal of Business & Economic Statistics asked, “Did Reality TV Really Cause a Decline in Teenage Childbearing?” Its authors, David A. Jaeger, Theodore J. Joyce, and Robert Kaestner, looked at Kearney and Levine’s work and concluded:

“Our results strongly suggest that the association between 16 and Pregnant and teen birth rates is due to differential trends in birth rates across areas with different demographic characteristics in the wake of Great Recession. The fertility rates of less advantaged teens, as proxied by race/ethnicity, fell much faster with the onset of the recession than those of white non-Hispanics. We find a relationship between MTV and birth rates even in the period prior to the existence of 16 and Pregnant, casting substantial doubt on the validity of the parallel trends assumption required for identification. While is possible that 16 and Pregnant may have affected teen birth rates, our results point to the difficulty of making a causal claim that the show, which debuted nationally at the nadir of the Great Recession, had a significant impact
on teen birth rates.”

The key part is that they say that it’s difficult to claim that the show “had a significant impact on teen birth rates.”

I reached out to Kearney and Levine, the original study’s authors, and Dr. Kearney told me that, “as a result of their detailed investigation of our data and our own reassessments, I am even more confident in the strength of our initial findings.”

They published a response that says, “We are certainly open to revising our assessment of whether the MTV show 16 and Pregnant led to a reduction in teen births, as our 2015 paper reports, based on the findings of future research. But, our reading of the multiple critiques put forward by JJK, including JJK 2018, do not lead us to alter the conclusions we put forward.”

That response also points to some compelling anecdotal evidence:

“Without getting into the technical details of those econometric models, we note here simply that even a casual look through the Twitter data reveals numerous tweets explicitly saying some version of, ‘watching 16 and Pregnant makes me want to take birth control.’ Those data give the clear impression that this show affected viewers’ attitudes.”

Will 16 and Recovering have a similar effect? And will it give birth to its own franchise, like 16 and Pregnant did with all of the Teen Mom shows, which turned their stars and their real-life drama into celebrity tabloid gossip?