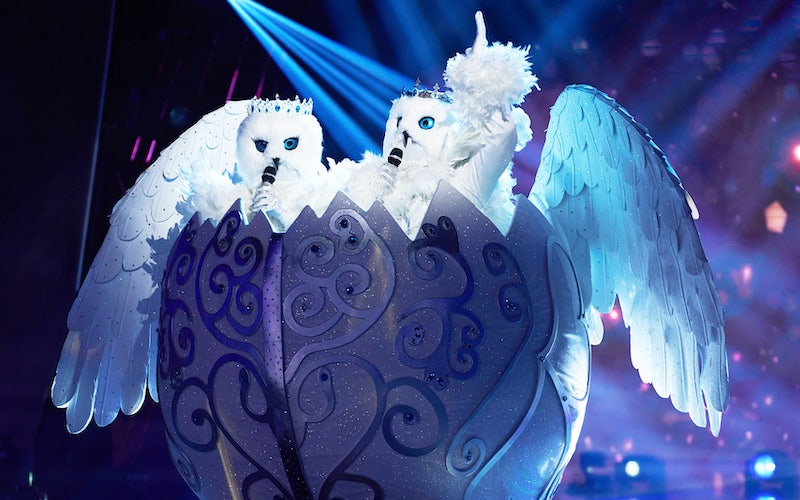 Dancing with the Stars, American Ninja Warrior, and Big Brother have made it clear that broadcast network reality competitions don’t need studio audiences. DWTS and ANW use pretend audience audio noises, which at best provides a background hum and at worst is annoying (like having the fake audience boo judges).

But The Masked Singer season four went much further, using various techniques to fake its studio audience, which was both weird and unnecessary. Three days after the Emmys opened with an extended joke that recycled past Emmy footage to pretend that Jimmy Kimmel was on stage in front of a packed house, The Masked Singer did the same thing—not to joke, but to deceive.

Many of The Masked Singer’s audience shots have been fake in previous seasons. While there was an actual studio audience for the performances, they pretended to react to the reveal, but were taken out of the studio before the singer was actually unmasked. That’s justifiable, even if the show’s reuse of reaction shots was sometimes obvious.

For season four, the show hired background players to pretend to be audience members, reacting to nothing. It seems like those may have been composited together and used in some shots. There were weird digital audience members in stands above and behind the judges, plus other effects like silhouettes that seemed to be crude computer graphics.

What was most disappointing is that the show opened with host Nick Cannon walking out onto the show’s X-shaped stage, which was suddenly a rooftop of a skyscraper. It was obviously a computer-generated city, more like Tron with all its neon, but it was an incredibly cool effect, and there was some bonus silliness with a computer-generated dinosaur roaring alongside the stage.

That faded away and was replaced by the soundstage studio, which then somehow magically had people. But as the episode went on, there were more and more camera shots that made it clear the studio was empty, save for a few stray people.almost every shot. They’d cut from a wide camera angle that clearly showed no people in between the stage and the judges’ table to a shot of rows and rows of people in that same location.

I assume that was footage from actual audience members from the previous three seasons of The Masked Singer, mixed in with various special effects that added audience members to other angles.

Why did they go to all this effort? Are they really convinced viewers at home need a laugh track in the form of people clapping and cheering, to see people reacting in order to know how to react themselves?

And why, exactly, did Fox think it was a good idea to project the image of people gathered normally, sitting next to strangers indoors for hours, yelling and screaming and applauding and turning to each other to nod and exhale virus particles? A Johns Hopkins study released this month found that strict physical distancing = “much lower chance of infection.”

Bizarrely, Fox executive Rob Wade actually bragged about this to Deadline: “The one thing I’m expecting is for people to say is ‘How come they’re not covɪd friendly? The audience aren’t wearing masks.’ Through various quarantining and various camera tricks, we’ve managed to do it.”

Congrats on lying so well. Maybe you’ll cause some deaths as a result and can brag to Deadline about that in a month or so!

Fox did use its Emmy campaign to promote the show and mask wearing by putting masks on various L.A. icons:

Why not continue that messaging in the show? Maybe even brag about not having a studio audience? Or put masks on some people who were spread far apart?

Or, at the very least, have Nick Cannon acknowledge that the audience is as fake as that dinosaur was at the start. That’d be both responsible and easy.

There was a brief disclaimer at the very end of the episode: “Due to health restrictions, visuals of audience featured in this episode included virtual shots as well as shots from past seasons. The use of these visuals was for creative purposes only and did not impact the actual audience voting and outcome.” But that was on screen for about three seconds, at the end of the credits, which doesn’t exactly compare to one hour’s worth of seeing that audience.

There were certainly signs that this season was filmed differently, from the judge’s wide desk to the clue packages for the singers. Those clue packages weren’t filmed on location with the gaggle of security guard extras; instead, they were animated or created in editing using footage of the contestant in front of a green screen.

Besides the unnecessary fake audience and the poor message that sent, The Masked Singer season four had a strong premiere: really fun costumes, and some surprisingly great singing all around. “This is the beginning of season four? This feels like the end,” Nicole Scherzinger said after Snow Owls performed.

Even Twitter’s guesses were elevated. After Sun performed “Cuz I Love You” by Lizzo, Christina Aguilera and Demi Lovato began trending.

The contestant eliminated as a result of viewers vote—without a studio audience, the show instead relied on some kind of mysterious at-home panel, though the season was also pre-taped so it’s not viewers watching at home now—was Dragon. He was unmasked at the end and revealed to be Busta Rhymes.

So yes, an 11-time Grammy nominee and iconic rapper was deemed to be the weakest singer and performer.

The more it ages, the more The Masked Singer is able to attract strong talent. It’s just too bad it thinks that’s not enough and needed to spend time and money creating dangerous fiction.