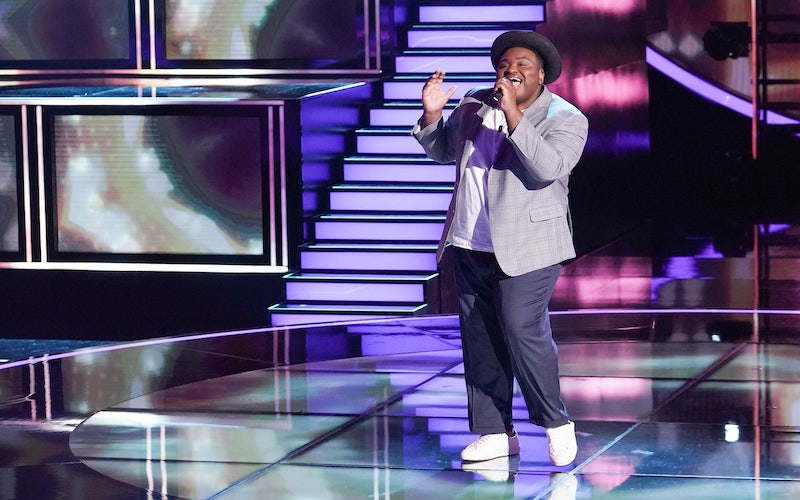 The very last singer on the first episode of Fox’s I Can See Your Voice, Telvin Lewis, was one of the singers featured on the premiere of Netflix’s Sing On. (He was also on American Idol season 15, the final season that aired on Fox.)

That’s not all the two shows have in common: Both have taken a really fun guessing game and wrapped it in unnecessary filler, making both shows too long for the content they have.

I Can See Your Voice is another format from South Korea like The Masked Singer, and it’s obvious why Fox paired them together. But it has such an awkward title that Fox has added this subtitle on promos: “Mystery Music Show.” Its title is just the start of how convoluted it can get, despite the fact that it’s really just a simple guessing game. There are six people, some of whom are great singers and some of whom are not. A contestant gets $10,000 for eliminating a bad singer, and $100,000 for correctly identifying whether the last person standing is a good or bad singer.

There’s a celebrity panel on hand to give advice, but often as useless as The Masked Singer’s celebrity panel was at the beginning—although since they’ve gotten better, maybe this one will too. In the first episode, they’re convinced that someone can’t sing because of the way he holds a microphone, and of course, he’s an amazing singer because the way you hold a mic while lip syncing has nothing to do with your actual singing ability.

To fill an hour, this has been stretched out into multiple rounds, where the contestant gets to choose one singer and learn a little more.

The first round of I Can See Your Voice is the best, as it has the singers lip sync. The good singers are lip syncing to their own recorded voice; the bad singers are, of course, lip syncing to someone else’s voice. Are they hitting the notes? Are they trying to hide their lips? Does the voice match our sense of who they are?

There’s very little to be learned in the subsequent rounds:

The game is overly complicated, right up to the end, where the contestant has to decide whether to keep the money they’ve earned ($10,000 for each bad singer they’ve eliminated in the previous rounds) or gamble on the $100,000 for their final guess.

Host Ken Jeong is just fine at filling that time with banter, though he was really helped, in episode one, by contestant Shannon Davis, who could host a show herself, that’s how great she is at talking through her decisions (even when they seemed bizarre).

The best part of I Can See Your Voice are the reveals, and the format gives us six of those in one hour. The singers build a little suspense—in the first episode, the “Golfer,” Jamie Hosmer, sat at a piano and started playing, while “Counselor” Maurniece Gayles had a great moment where she seemed like she was going to start singing, and then didn’t. (The suspense about whether or not “Stylist” Telvin Lewis was a good or bad singer was ruined for me, since I’d already seen him sing on Sing On! just last week.)

During this time, there’s an on-screen graphic that flips from “bad” to “good” before stopping on the answer when the person starts singing. That’s only in case your television is on mute, because it is obvious with the very first note whether the person has been faking or not.

I found myself just wanting that: lip syncing, guessing, revealing. Why did this have to be an hour and so much complication?

That’s the exact same question I asked while I watched Sing On!, the new Tituss Burgess-hosted competition. Netflix previously released versions of Sing On! from Spain and Germany; all of them were filmed at Pinewood Studios in the UK. It’s the same model they used for The Circle, and it’s really smart: they create one set and production team, and then bring in different casts and hosts.

The format is like Guitar Hero meets The Weakest Link: six contestants perform a song, and their singing is analyzed in real time to see if they’re hitting notes or not. That gives each singer an accuracy score, like 65 percent, and their average accuracy gets translated into dollars. The winner will get to keep all that money.

The singers are, for the most part, pretty great, and with well-chosen pop songs, I loved listening to them. But I couldn’t stop watching the visualization of their singing at the bottom of the screen, as little bubbles get filled in with red if they’re hitting the note.

So I basically watched very little of their performances, instead focusing on how precise and accurate people singing karaoke actually were.

In between songs, they vote each other off, one by one. Tituss Burgess handles this smoothly—his repartee makes him a perfect game show host— but these voting rounds feel like they take an eternity or two. And since Sing On! shows us each singer’s accuracy percentage as they vote, we know which singers are better than the others, so the only surprise is whether or not they make a dumb decision.

Maybe there’s some strategy here: Do you keep a better singer around to try to make more money? Or do you get rid of them because they’ll be competition if you make it to the end? As much as I love strategic reality TV, I just couldn’t bother to care about that; I only wanted to hear them sing again.

When they’re eliminated, Tituss asks the contestants if they’ll stay to “sing on” anyway, which is weird considering the show also uses the phrase “sing on” to describe the contestants who are still actually in the competition. Those who are eliminated go stand on a balcony and sing during the all-sing choruses, maybe? We basically never see them.

Just like I Can See Your Voice, there’s a really strong center to Sing On!, it’s just crowded out by folderol that takes some of the fun away. I’m glad to sing along in my living room as people who can actually sing belt out “Chandelier” or “Wrecking Ball.”

Both of these shows could have been Quibi shows: sing, reveal, done in less than 10 minutes. Of course, then, no one would have actually see them. I might keep watching each one, with abundant usage of the fast-forward button. There are excellent singers on these shows, you just have to find them.