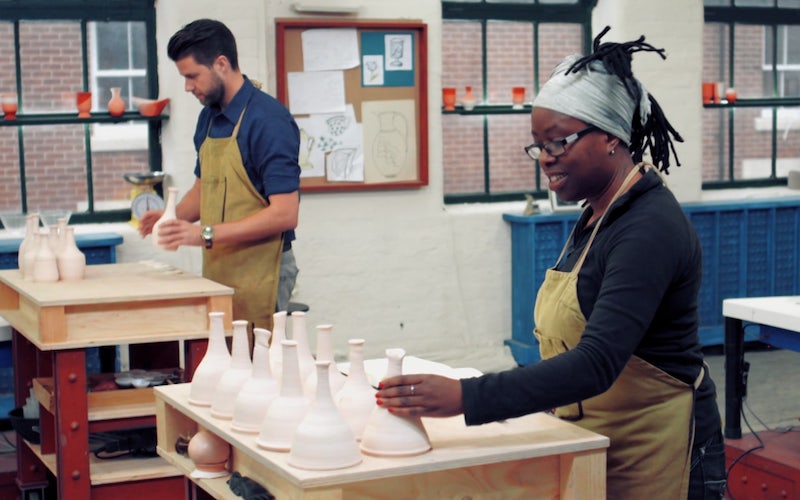 James and Sandra during episode 3 of The Great Pottery Throw Down. (Photo by Love Productions via HBO Max)

Because The Great Pottery Throw Down is produced by Love Productions for the BBC, just like The Great British Bake-Off, I was ready to be instantly charmed—swept away to a countryside to watch amateur potters throw clay and sculpt masterpieces.

Instead of a tent perched in the middle of a sun-dappled, verdant countryside, the drone drifts over the peaked roofs of a massive, industrial brick buildings in the middle of a city. Instead of tent with sunlight streaming through, the contestants were crowded into an indoor room. And instead of three challenges in two days, there would be one challenge that took days upon days to complete.

I was skeptical that this could come close to the heart of my beloved Great British Bake-Off. But I should have known to trust Love Productions and the BBC, because The Great Pottery Throw Down quickly pulled me in, the warmth of its kiln and its contestants radiating off the screen, demonstrating their shared love and talent for a craft.

With all of the changes The Great British Bake-Off has undergone in the last few years, the way its challenges and hosts are tumbling toward lunacy, it’s not quite the same as it was in those early seasons.

The Great Pottery Throw Down felt like a throwback to those, and, yes, is actually superior to the most recent seasons of GBBO. Perhaps that’s because it has the advantage of newness, though it is closely following in the footsteps of its baking sibling.

What it lacks in ease of reproducibility—I can’t just grab some clay and whip up my own egg cup, in the way I could attempt an egg custard tart—it makes up for by excelling on every other level.

All three seasons of The Great Pottery Throw Down are now available in the US on HBO Max, including the 2020 season, and they have fewer episodes: just six in the first season, so I’m making my way through slowly. I don’t want to burn through it and treat it as disposable.

My first introduction to pottery was the scene the 1990 film Ghost, which was deepened by the parody of that scene in 1991’s The Naked Gun 2½: The Smell of Fear. That represents the totality of my knowledge of the craft for the past 30 years. Unlike cooking or baking, it has not had its own reality TV show, perhaps because the process of producing pottery is far more involved and time-consuming than baking a loaf of bread.

Thankfully, The Great Pottery Throw Down has a structure that makes a multi-day process into entertaining and dramatic television, and also fills in dummies like me without letting those interstitials about history and technique bog down the rest of the show.

Each episode basically begins with its version of the showstopper challenge—create a sink, or nesting bowls, or a sculpture, for example. The contestants have a limited amount of time for each stage of the competition. The most time-consuming part, firing in the kiln, is handled by a non-contestant, Richard Miller, who quickly becomes a character alongside the judges and host, with his onesie jumpsuit, and the way he cares for the contestants’ work.

In the meantime, there are two shorter challenges: a technical challenge, which is judged blind, and the “Throw Down” challenge, which has the contestants all sit at pottery wheels and attempt some kind of speed-based throwing challenge. (Throwing, I learned, just means manipulating clay on the pottery wheel.)

Kate Malone and Keith Brymer Jones, both ceramic artists and potters themselves, are perfect judges. If a bowl is cracked, they don’t smash it onto the floor like Gordon Ramsay might, but make sympathetic noises like you’d make to a baby that’s tipped over its water. They understand the difficulties, and also can explain why something has gone wrong.

What I like best about them is that they’re not searching for perfection, but for creativity. One of their bottom two contestants in the first episode is someone who’s technically fine but has not pushed themselves nor their creativity. “I’m annoyed with him—he was born to clay,” Kate says of that person. Her critiques express such reverence for the medium and the potters’ work.

When contestants do push themselves, the results—both in the main challenge and in the two quicker challenges—are quite stunning.

While it doesn’t constitute any kind of spoiler, I don’t want to ruin the surprise of Keith Brymer Jones’ version of a Paul Hollywood handshake, because it was such a delight, so perhaps skip ahead until you’ve watched an episode or two. Actually, comparing that reaction to a Paul Hollywood handshake—which I’m so absolutely tired of I suggested, in my appearance this week on Extra Hot Great, that contestants respond to his outreached hand with a cleaver—is unfair. That’s because Paul is performing and bringing attention to himself, while Keith is reacting on an emotional level: he cries. Yes, actual tears, which seem to take him by surprise every time. It’s the sweetest and most goddamn satisfying thing to see him literally moved to tears by, say, a ceramic sink.

Host Sara Cox is similarly reacting to what’s in front of her, rather than planning elaborate bits and then showing up to distract the contestants. As she makes her way around the workroom, she’s encouraging and funny, and sometimes flirty—because The Great Pottery Throw Down tackles the not-so-subtle sensuality and sexuality of pottery head-on.

There are no soggy bottom innuendos here: instead, just a room full of contestants yanking away on wet phalluses, or a contestant observing how vaginal another contestant’s piece looks—and then being gently mocked by several women for his lack of understanding of what vaginas actually look like.

So, yes, everyone is having a lot of fun, including the contestants, who are amateur potters, though some of their day jobs (painter, artist, art teacher) are certainly adjacent. They’re supportive and kind to each other, although not always to themselves as time pressures and missteps complicate their creations.

They’re the center of the show, of course, though by the end of the first episode, even Middleport Pottery—the show’s industrial home, which was built in 1888—had grown on me, and I started to notice all of the life around it: flowers perched in a chimney, flocks of birds, and, of course, a room full of passionate, talented people being challenged to test their skills and creativity.

The Great Pottery Throw Down: A