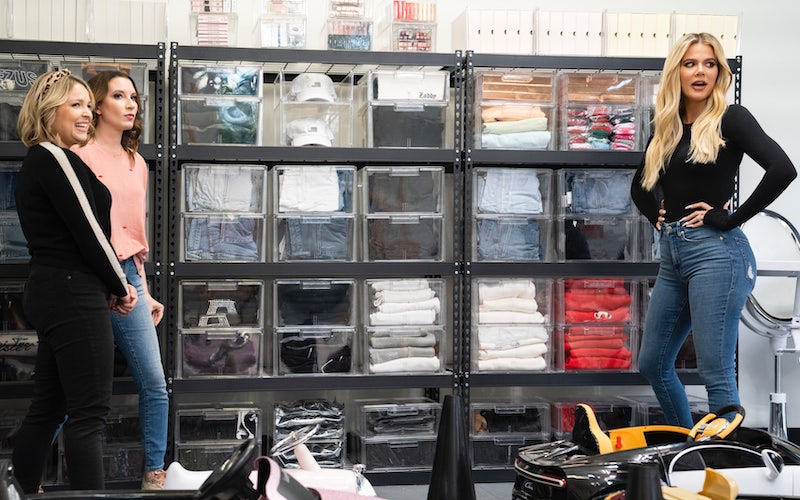 Joanna Teplin and Clea Shearer with Khloe Kardashian in her garage on Netflix's Get Organized with The Home Edit. (Photo by Christopher Patey/Netflix)

There’s a former reality star on Instagram whose photos are, well, visually stunning, though not quite enough to distract me from the fact that they’re also rather peculiar. Like, who took this photograph? Who stands like this on the beach? Do you drink your coffee like this?

The same is true of Instagram photos created by The Home Edit, the brand name for organizing influencers Clea Shearer and Joanna Teplin’s business. They post gorgeous photos of things often organized by color and lined up perfectly in clear containers. The result is a lot of chaos corralled into a gorgeous rainbow, creating a sense of calm and order—which is exactly how I’d describe Get Organized with The Home Edit, their new Netflix reality show.

Each episode follows Clea and Joanna as they organize one celebrity’s space, and one normal person’s space—though nearly all of the normal people have gorgeous, well-designed homes to begin with, even if their drawers, closet, or kitchen may be a little cluttered.

Joanna and Clea complement each other well, and share a love of “Product,” their name for things they buy to store the things they buy. This is a show that celebrates buying more things, and comforts us by affirming that all the things we’ve bought at Target and Amazon and really don’t need can live together in harmony, preferably in things we’ve bought at The Container Store.

It’s very affirming to consumer culture: “You’re allowed to own this amount of stuff,” Clea says. The show made me want to buy more stuff—containers, but especially turntable containers, which they deploy in different places, from art carts to kitchen cabinets.

This is not a secret; it’s even the subtitle to their book, The Home Edit Life: The No-Guilt Guide to Owning What You Want and Organizing Everything.

That makes the method and the show itself the spiritual opposite of Netflix’s Tidying Up with Marie Kondo, which was about getting rid of things, retaining only what sparks joy.

The moments we see on Get Organized with The Home Edit tend to be those that involve conflict or anxiety—though it’s not Joanna versus Clea conflict, but usually conflict with the abbreviated timeline they have (about a day for each project), or anxiety about trying to wrangle all the stuff. There’s no shaming of the people whose stuff they’re organizing, but there’s also very little decision-making, at least not on camera.

The episodes go by quickly: two makeovers in about 40 minutes, with more time spent on the reveal than anything else. It’s Trading Spaces or Clean House on fast-forward, populated by quite likable people. The casting is strong: both the celebrities and the non-celebs are fun to watch, even though they’re not on screen all that much.

Joanna and Clea make for a good team and a great TV duo. They swoop in as a tornado of good intentions, throwing out thoughts and ideas and “Product” non-stop. It’s easy to get caught up in and might be exhausting if it lasted any longer. What minimal discord they have is quickly resolved, though their team members—who apparently have to wait in the car while Joanna and Clea talk to their clients—sometimes seem beleaguered, and I’d love to hear what they’re actually thinking.

Clea, who’s taller, tends to freak out more. “Every time a new drawer was opened, that’s kind of when panic and anxiety set in,” she says in one episode. Joanna, who’s shorter, handles some of the panic- and anxiety-inducing things. “This actually is my favorite thing to do. I love for a drawer like this,” she says.

During another project, when they realize their Container Store “Product” won’t fit in Retta’s cabinets, they send a staffer off to buy cubes instead of rectangles. But then Clea gets text messages indicating that the store does not have cubes, nor do they have more than one of any particular box.

Even in moments like this, it’s never dire, and it’s the lowest level of reality TV drama: light, quickly resolved. And Clea and Joanna’s charm and flashes of humor keep the tension down. Standing outside for an on-the-fly interview, Clea is talking about something that’s not going right, and then breaks the fourth wall halfway, using reality TV production lingo: “Just saying it makes me wanna—hold for a plane.” An airplane is going overhead, and they have to stop for a moment so they can talk when there’s no background noise. Everyone cracks up, even off-camera.

The work they create is beautiful and clean and attractive. “Who doesn’t want every square inch of their home organized like a crazy person?” Khloe Kardashian asks, and it’s hard not to disagree.

But upon closer inspection, things maybe aren’t as desirable: Do you want your things in clear plastic bins that will get immediately dirty and smudged and need to be cleaned? Do the beautifully lettered stickers they use to label the contents of bins come off easily if someone changes what’s in that bin?

What I found myself asking most while watching was: Would I actually want to organize things by color? Sharpies, sure. But books? Or food in a pantry?

One of The Home Edit’s Netflix show clients makes this point perfectly. In one episode, Joanna and Clea and the staff members they make wait outside while they talk to the clients organize David Burkta and Neil Patrick Harris’ kids’ playroom. They do this by shoving a ton of stuff into a closet, turning it into something that resembles a room on Hoarders—it’s really disturbing that organizers have just piled shit up and hidden it away—and then rearranging what’s left.

They place the kids’ board games on a high shelf that spans the room, in stacks based on color. Clea says, “the rainbow represents everything our company stands for: it’s a smart, organized system that’s also aesthetically pleasing and beautiful to look at.” But I wondered if it actually was a smart system. So did NPH.

“It looks great.” It sure does! But notice that his objections about its functionality haven’t been addressed. Making something aesthetically pleasing doesn’t make it any less useful or functional.

Also, is it useful or functional if someone else organizes your space for you?

In the middle of one episode, I remembered something that happened regularly during my childhood. My short attention span and need for both change and control would periodically lead me to clean out and organize the bathroom I shared with my sister—including my sister’s half of the bathroom, too. Sometimes I even switched our drawers so that I’d be on the right side and she’d be on the left side, and I’d do this while she was away for the day.

I got a lot of joy out of the process, but was it helpful or useful to her? I asked my sister, Beth, if it was, and this was her first reply: 😐

Then she added, “I was impressed because it looked like a perfect store display, but I was also pretty sure I could never touch anything in there again.”

I wonder if Get Organized with The Home Edit is doing the same thing: creating flawless-looking displays of stuff that make for perfect Instagram photos and reveals on their Netflix show, but never to be actually used again.

Get Organized with The Home Edit: B