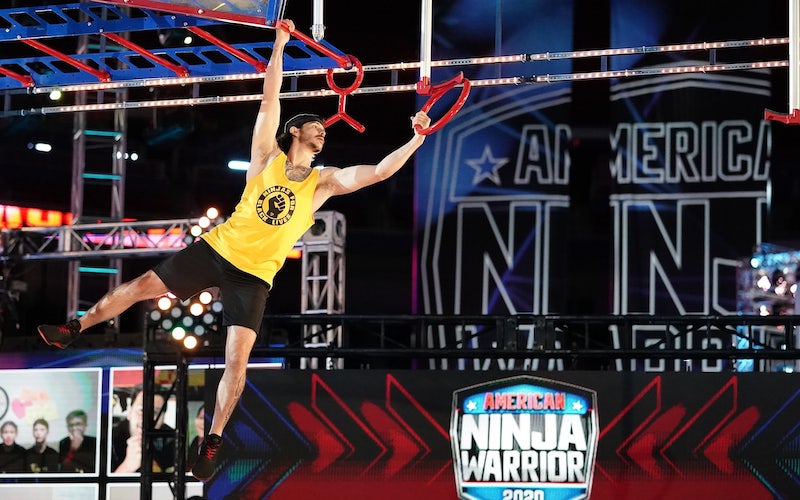 Flip Rodriguez, wearing a Ninjas for Black Lives t-shirt, competes during the qualifying round of American Ninja Warrior season 12 (Photo by Elizabeth Morris/NBC)

Before he ran the new American Ninja Warrior season 12 course, welder Anthony Eardley looked into a camera lens and said, “The whole world is going through a lot, but the only way we move forward is together. Obstacles get overcome in unity, and I’m here to bring that.”

I appreciate the call for unity and the reminder that we can work together to overcome obstacles, even if the metaphor that doesn’t quite hold together—after all, American Ninja Warrior’s insane obstacles are very much overcome by individuals working only with their own impressive athleticism, upper-body strength, and endurance.

The obstacles, and the people who tackled them, were very much the focus of the season premiere of this abbreviated season; while there are some key differences we’ll get to, it was very much like a regular ANW episode. But the obstacles being faced by America right now—a global pandemᎥc, reckoning with racism, continued violence committed by police against unarmed Black people—were there, too.

Some of this was addressed directly. Flip Rodriguez and Jody Avila were both wearing yellow “Ninjas for Black Lives” t-shirts, an image Matt Iseman said we’d see on several competitors. (Avila ended up with the fastest time of the first episode, finishing the course in 1:44.41, less than one second faster than Tyler Gillett’s 1:45.20.) The picture of Rodriguez above perfectly encapsulates the season so far: a clear message inside a familiar image.

Introducing one competitor, Pauline Avila, Matt Iseman said, “During this new season, we want to recognize the heroes who’ve been working hard to keep all of us safe.” In other words, the people who’ve put themselves at risk despite being underpaid, overworked, and given lip service (heroes!) instead of appropriate compensation or the resources they need to do their jobs safely and well.

The most emotional story for me was that of Pauline Avila, a nurse from Houston who works in an ICU unit. (Her husband, Jody Avila, has competed before.) Her bio package showed some b-roll of hospitals, but also an image of her face after wearing protective gear all day.

“Some days are really just tough for us,” she said, becoming emotional. “Just last week I held the hands of my dying patient while his daughter watched him take his last breath through an iPad. She kept saying to me, Thank you for being there with him, so he’s not dying alone.”

Her pain doesn’t end when she leaves work. “To do this day, I sleep in the guest bedroom in my house,” she said. “When my youngest son, who’s four years old, comes up to me and says, Mommy, why can’t I hug you? Mommy, why can’t I kiss you? it’s heartbreaking.” Yes it is.

While I still think that filming reality TV shows this summer, in the middle of a nationwide outbreak, was unnecessary risk, I do appreciate that American Ninja Warrior used time during the two-hour premiere to tell stories like Pauline’s, and the teachers on Alyssa Bierd’s team, some of whom we saw teaching remotely, which just looked exhausting.

I also appreciated that the show used some of its time to demonstrate good practices, because there are still people who minimize and/or outright deny that Covɪd-𝟷𝟿 is worth responding to, never mind the people who wear masks but not on their noses (what?! why?!).

The show temporarily broke the fourth wall to let us see crew members cleaning the course, contestants and crew wearing masks and standing apart, and people being tested. Everyone was masked.

Well, except for the contestant competing (of course), and their two teammates cheering them on from the sidelines, and hosts Matt Iseman and Akbar Gbajabiamila. Matt and Akbar were most definitely not six feet apart or wearing masks in their perch above the course, from which they exclaim and scream and freak out as usual. Nor did the show give us information about why it was safe for them to interact like this.

It’s similar to what happens on Big Brother eviction nights, when contestants (who’ve been completely isolated from the outside world) put on masks, while Julie Chen Moonves (who’s been going home daily and out in the world) does not. There’s thought there, but it’s not a complete one, so it ends up being a mixed message.

American Ninja Warrior season 12 takes place in The Dome at America’s Center, a perfect name and location for this unusual season.

While the qualifying course’s six obstacles were constructed of its typical grid of metal trusses, parts of the course, like the starting platform, were a bit more elaborate, perhaps because it’s a slightly more permanent structure compared to the usual course, which is moved from city to city. (Here’s a behind-the-scenes look at how American Ninja Warrior is usually filmed.)

There’s no audience inside the dome. It can fit 80,000-plus people, but the stands and floor are empty. There was, however, the sound of a fake crowd, thanks to television magic. The pretend crowd even cheered more loudly at pivotal moments.

While there aren’t any actual fans, contestants are cheered on by their two teammates—though everyone is competing individually—and by their friends and family members, who are watching remotely and appear on large screens next to the course. (It’s unclear how the show will edit out its biggest star following his arrest; will it still show us his teammates?)

The friends and family members may actually get a better view than if they were standing next to the course, and seeing their faces alongside the course is a great way to have people cheering on the contestants.

And they needed it. The new qualifying obstacles were tough and took a lot of people out: Weight For It, which has horizontal bars that are connected to each other, so letting go of one makes the next one drop down—as you’re flying through the air trying to grab it; Ring Chaser, on which the contestants had to move through monkey bars as a ring rolled next to them, grab it, and then use it to jump from one peg to another; and Rib Run, a series of tiny platforms attached to pendulums that easily swing out and away.

This season will be eight episodes long, and the format is very different than usual. Reaching the top of the Warped Wall doesn’t guarantee advancing to the next round, for example.

And while the all-stars selected two people to come with them and compete, they’re not competing in teams of three; it’s an individual competition, though the Power Tower will be used in conjunction with the teams. (SBNation’s American Ninja Warrior site breaks all this down.)

In other words, this is a very different season of American Ninja Warrior—but it’s still very familiar, and still keeping its focus on incredible people whose athleticism is especially impressive to me as I watch them from my couch while eating M&Ms, and also people who deserve to have their stories and sacrifices shared on a larger platform.

Perhaps this season of American Ninja Warrior can both entertain and make a difference by convincing the people who still need to be convinced wear masks—or just keeping them at home, watching TV instead of spreading viruses.