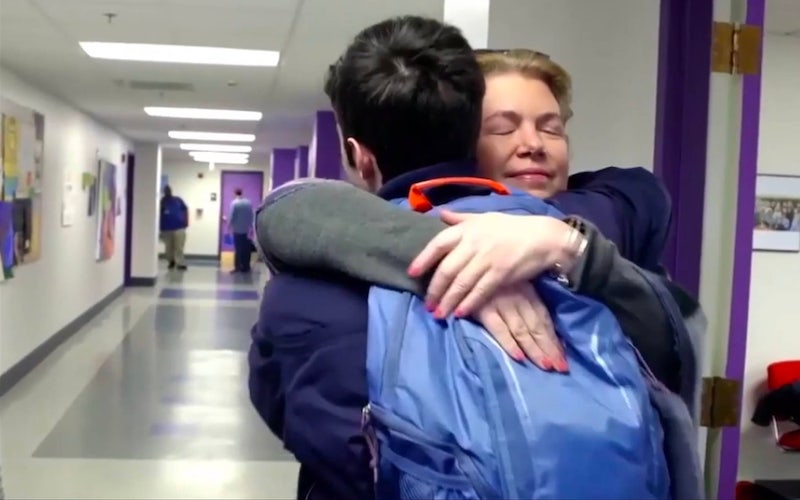 16 and Recovering could not be more different from the franchise that gave it its name, 16 and Pregnant. Yes, there are similar threads—both focus on teenagers who are struggling—but 16 and Recovering is an eternity from any series I can recall seeing on MTV, maybe since 1990s Real World. What passes for entertainment on MTV today is a sad, shriveled glob of reality, from the celebration of drunken violence masquerading as a competitive reality show (The Challenge) to just plain stupidity (the Jersey Shore spin-offs). There is nothing wrong with stupidity, but MTV doesn’t even try hard with that. Look how often MTV airs Ridiculousness and you’ll get a sense of how little this empty shell of a network has to offer.

Until now. 16 and Recovering is raw and honest, with well-rounded characters who are immediately endearing. The premise is simple, following students and faculty at Northshore Recovery High School in Beverly, Mass., a community northeast of Boston. Each episode focuses on a few students, and ends with title cards explaining what happened to them since filming concluded.

It’s about an epidemic of abuse, fueled by prescription medication, but is sharply focused on the humans who are dealing with those costs. The kids happen to be addicts but are mostly just teenagers, on their phones all the time, responding to adults with annoyance in their voice, sprawled out on each other.

Still, the subject matter is brutal. There’s drug use, yes—though actual drug use isn’t shown, just the aftermath (teenagers who are high)—but also depression, self-harm, cutting, abuse. The trailer shows the school’s principal telling students that someone overdosed and died, so it seems possible one of the kids the show introduces will end up dead.

Director Steve Liss’s access is incredible—he’s with Sam, a student who has discovered photography, as he takes beautiful photos by the ocean. He’s with Sam’s parents hours after Sam disappears, filming as they nail signs to poles in the neighborhood. He’s with them as Sam’s mom stands in her living room realizing she’s like parents who hold up framed photos of their dead children, and he’s there, at school, when Sam shows up, completely wasted.

But Liss’s extraordinary achievement is presenting all of this in a way that leads with warmth and assurances that these kids are not going to be abandoned. There is an immediate and clear sense of community and mutual respect, which obviously makes for a terrific educational environment, but also for exceptionally appealing television.

The show opens with principal Michelle Lipinski, who created the school “because I just felt like I was losing a whole generation of my students, and I had to make a difference,” she says. “We love our students. We really do care deeply about them, and they know it—my students know it.” The way she talks about the school and addiction and the kids in interviews could, in isolation, potentially sound self-important, except Liss is constantly showing Lipinski in action, and her actions are even more profound than her words.

“Do you have a plan to hurt yourself right now?” she asks, holding the hand of a student, Alba, who admits to self-harm the night before. “I cannot imagine this world without you, Alba, so we need to make a plan.”

Alba is embarrassed about being depressed. “It’s part of life,” Michelle says, not cheerfully, but with such human generosity. Even when she’s frustrated, there’s no sense of annoyance or anger.

After Sam shows up at school, Michelle is on the phone with his mother, making a plan, and we hear her say, “It’s just addiction, honey. And sadness.”

The way Michelle talks about addiction is so opposite television’s normal tropes, and our society’s messages about addiction being a personal failure. She knows she’s dealing with illness and disease, and knows failure is part of recovery. “This society does not tolerate adolescents with substance use disorders. They don’t look at them the way we do, which is, they’re sick, let’s give them more. They look at them like, they’re sick, let’s get them the hell out of here These kids: they’re going to relapse,” she says. And Michelle is going to be there for them when they do.

Other teachers come into focus, often while randomly drug testing students, and cups of urine are featured on screen more than some students. If the test is positive, the student isn’t shackled and dragged to jail, or carted off to rehab, or suspended and left to wander the streets doing more drugs. They’re not even sent home. “There’s a culture around student discipline, and it’s very punitive,” Michelle explains. “We, as educators, are supposed to have complete control over our students, but in reality, that’s just impossible, so we do things a little bit differently here.”

Positive tests or admissions of drug use are treated like someone stumbling and falling on the ground. A kid trips, literally, and teachers help them up and figure out what’s next.

In episode one, that’s art teacher Devin, who talks beautifully about how making art, trying things and failing, is such good practice, and hearing her talk it’s so clear that this is a skill teachers don’t have time to teach in this era of teaching to standardized tests.

Devin knows this well. She tells us that she met Michelle after being fired from another job because of her drinking. Michelle, she says, “just happened to be looking for an alcoholic art person.”

MTV is offering help and resources to those who may see their experience reflected in the show, or who are just struggling. (If you need to talk to someone, call 1-800-273-8255.)

Unspoken, at least in episode one, is how white the school is, and how these kids are getting the kind of help and compassion often not afforded to people of color. Systemic racism affects addiction, too, and our society’s response to people with substance abuse is wildly disproportionate: “White people who are addicted to heroin or other opioids are 35 times more likely to receive treatment with a medication called buprenorphine than are African Americans or other people of color,” according to Kaiser Health News, and “[a]lthough rates of drug use and sales are similar across racial and ethnic lines, black and Latino people are far more likely to be criminalized than white people,” according to the Drug Policy Alliance.

16 and Recovering gets its title from the 2009 MTV reality show 16 and Pregnant, which profiled a different pregnant teen in every episode. It may have contributed to lowering teen births, but it definitely contributed to MTV’s bottom line by giving birth to several offspring: reality shows that turned its stars into celebrities and fodder to be fed into the celebrity gossip shredder.

We’ve seen addiction, reality TV, and celebrity before: VH1’s Celebrity Rehab with Dr. Drew was a show that plainly illustrated addiction and the challenges of recovery, even when it was clear that the celebrities were more focused on a paycheck or exposure, and even when that self-serving embarrassment Dr. Drew was making it about himself.

But 16 and Recovering has none of the contrivances of reality TV and yet all of its strengths, drawing us into people’s lives and showing us what it’s like to be them.

Liss is a former Time magazine photographer who directed the documentary Sacred Cod (which aired on Discovery Channel in 2017), so he’s not coming from reality TV, nor does 16 and Recovering feel like it was pitched as a reality show or “docu-series” or whatever label MTV wants to give it, with the cast vetted by soulless network executives.

Every frame feels like what would have happened had Liss not been there, which is a testament to his ability to have his camera and production be a as fly on the wall as possible, even when it’s clear the students are noticing the camera’s presence.

The only artificial construct are the sit-down interviews with cast members, and even those just fall open like conversations. No one is sitting in front of a green screen and giving a producer lines they’ve been fed.

But there certainly is a confessional core to 16 and Recovering, with teenagers sharing their stories. “I relapse a lot,” Sam says. “It’s so hard to stop relapsing.”

Alba says, “I’m an addict but I want to not kill myself, and learn how to be alive.” They are learning to live, thanks to Michelle Lipinski and Northshore Recovery High, and perhaps 16 and Recovering will show others living with addiction that there is a path forward, and show the rest of us what help and compassion look like.