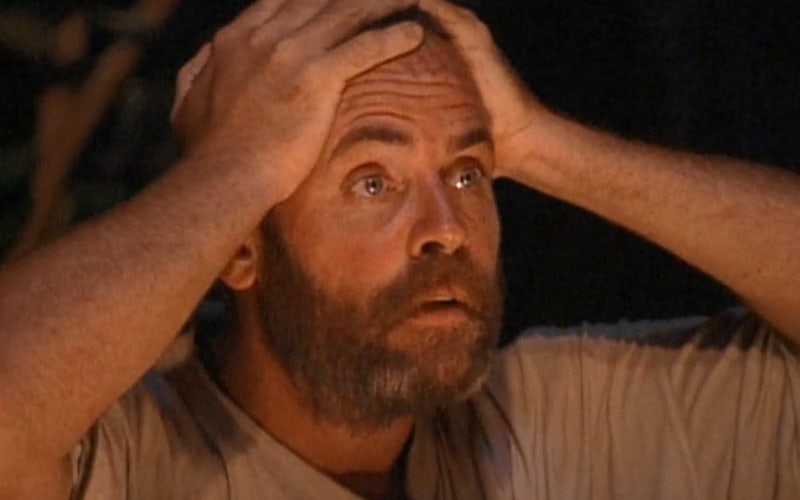 Twenty years ago, on the fourth Wednesday in August—Aug. 23, 2000—Survivor: Borneo concluded, with Richard Hatch winning $1 million. Nielsen says 51.7 million people were watching that two-hour finale; in the following 10 years, no other entertainment television show would top that, except for the series finale of Friends, which had 800,000 more viewers.

The Survivor: Borneo solidified the way this game was played forever. And it proved reality television—unscripted, real people, but produced and heavily edited—could be an incredible force, as shows from American Idol to Love & Hip Hop would demonstrate. The success of Survivor transformed network and cable television, and its creator, Mark Burnett, went on to apply his brilliance in crafting reality television to a similar show, Survivor set in corporate America, and that show “resurrected Donald Trump as an icon of American success,” and paved the way for Trump to become president, and for him to become a president who, this year alone, has literally “killed thousands of Americans.”

There are fragments of the Survivor: Borneo finale that are burned into my mind forever, and other parts I forgot entirely, like the tie vote at final four, and the actual ending, the heavily choreographed scene with Richard flying home and getting into his Pontiac at the airport, and opening an envelope with the check inside. I’d forgotten that so many, from jurors to fans, thought Rudy would be a lock to win.

Today, it may seem like a huge unforced error for Kelly to pick Rich to compete against in the final two. But Rudy summarizes what I think was the conventional wisdom: “He stepped on some toes and people aren’t going to forgive him.”

And Rich’s win was far from unanimous; he won by a single vote. (The seven-person jury looked so small! Of course, there were 16 jurors and three finalists in Survivor: Winners at War last spring. That’s quite a crowd: 20 people at Tribal Council, including Probst, versus 10.)

Rudy also does succinctly explain Rich’s success: “He’s a good leader, he’s smart, and he’s the guy that got this alliance going that brought the four of us right to this final stage.”

Hearing Richard Hatch’s final words about what providing for his family and knowing what was to come—51 months in federal prison—was tough. That prison time came after a sordid legal saga that is not as simple as Rich didn’t pay his taxes on $1 million, which is what it’s been reduced to since.

A lot of what happens in the finale and the first season is similarly reduced, and re-watching this season has reminded me of so much nuance that I’d forgotten about, like the tenuousness of the Tagi Four’s alliance. They only made it to the final four because Kelly won immunity after immunity—eventually winning five in a row, and becoming the first challenge queen. (Nine other people went on to tie Kelly’s five wins in a season record, and only four have beaten it since.)

I’ve also appreciated re-watching to see the rituals of Survivor being established. Some things are exactly the same now, 20 years later, while others are still being refined, and some were dropped entirely (like that yell between scenes).

The visual language of the show is one of those things that was stellar at the time and seems a little less impressive now, especially since it’s improved since then. But the editing in this final episode is strong by today’s standards—especially when it’s fading from their burned, abandoned camp to Kelly and Rich walking toward the final Tribal Council, intercut with jury speeches.

The first Rites of Passage, the ritual that would survive until Survivor: Redemption Island and that I still miss, is actually not a walk past the torches of fallen contestants, but a symbol-laden walk to the final immunity challenge, where the “natives are chanting,” as Probst said.

Speaking of offensive things: Dr. Sean says “Fat Naked Fag” at least four times at the final Tribal Council, and does so unbleeped, yet the show never explains what the actual fuck was he talking about, using a slur—obviously, one that was more culturally acceptable to use, considering CBS’s broadcast of it—over and over again. Back in 2000, EW asked CBS and “Rich talked about producing a naked calendar after he was done with the show.”

Meanwhile, the first immunity challenge—which was followed immediately by a vote, no conversation—was “Fallen Comrades,” a challenge I miss, and that was another close one. Kelly and Sue were tied, and Rudy was almost right there, which I think shocked even Rudy (who’d earlier declared “I don’t know” “I don’t care” about anybody).

The vote, too, was tied, and Rudy and Kelly’s votes sent Sue to the jury. Kelly’s vote may have been the final betrayal, but her relationship with Sue had long been over. And one vote was what decided who got $1 million, and what kind of game play would be valued and emulated.

Alliances are the key to Survivor success

The final two players each presented a way of playing the game, and they actually both echo what’s to come: strategy and challenges, alliances and betrayals, friendships and bitter jurors.

But it’s Rich’s play that’s more complex, even though neither the editing nor Probst have to hit us over the head with it. When Jenna asked who should be in the final two other than them, Kelly chose two people not on the jury (Sonja and Gretchen), while Rich chose Rudy and Greg (votes he eventually got). It’s unclear if those answers actually mattered to the jury’s votes, but Rich was playing in a different league.

Sean berates the final two for making the jury choose between two such unsavory characters, which is comical now but was quite representative of what some people thought at the time. Richard’s win shocked people, after all.

What Sean missed, even from inside the game, was that Survivor was to become primarily a game.

That game includes relationships and very real feelings—Sue’s snake and rat speech, which gave me chills today just as it did 20 years ago, and Gervase gives an equally impassioned lecture while casting his vote—but it is a game, and it took Richard Hatch winning to prove that playing strategically and cunningly is a path to winning.

“I was really shocked in the beginning by how few people were planning. It seemed a vacation to 16 people who were told what this was out, who saw the logo, which said outwit, outplay, outlast,” Rich said early in the episode.

Rich isn’t alone in locking in what Survivor will become over the next 39 seasons and 20 years. “In order to win the money, you gotta make an alliance, or don’t even show up,” Rudy said, in one of his many memorable lines in the episode.

Rudy also explained the endgame. “We were in the position of power where we could get rid of anybody we wanted to. We had ’em lined up But now, we’re finished with the alliance,” Rudy said. “You’re on your own.”

As I’ve discussed in earlier recaps this summer, I’d forgotten how much the alliance transforms—even though Rich explained it in the finale. “That alliance went through a number of machinations,” he said. “It wasn’t continuous,” and that means he does not have the “sense of accomplishment I would have had the trust been unbreached and we went through cleanly.”

That breach of trust—Kelly’s change of heart, and unwillingness to participate in the alliance—lead to a lot of the finale’s drama. Yet despite the incredible drama and excitement, the jury looked surprisingly bored during the final Tribal Council(s). Colleen even said, “I think we just want to end it.” I take that as a sign that most of the cast had no idea what they were playing, and could not have fathomed what was to come, and just how obsessed people would become with the show.

During the final immunity challenge, there’s a now-famous moment when Richard Hatch declares, “I think it’s time for a speech,” and then steps off, leaving his ally Rudy to play alone. But all he said was “I’m probably never going to outlast you, Kelly” and “I wish you both luck.”

The part I remember so clearly—Richard betraying his one true ally, Rudy, and leaving him there to fend for himself—came later, and was actually Jeff Probst’s read on the situation.”You just hopped out of this game, well over two hours ago, leaving Rudy” to compete alone, Probst said, and adds, as if he was speaking for Rich, “Rudy, you owe me man.”

“I don’t think he owes me,” Rich replied. “I’m not going to hate the man if he changes his mind.” How did I see Rich as a conniving villain when he kept saying things like that, and when he talked about being content with becoming the runner-up if that happened? I suppose I might not have believed him, but he seems pretty sincere.

Earlier, while sitting in the sand and waiting for Kelly or Rudy to let go of the immunity idol, Rich said, “This game is about a lot of different things, and one of those things is mental strategy.” Few of his fellow Survivor: Borneo players realized that, how central a role mental strategy played, yet most of the people who played Survivor in the subsequent decades would model their game play after his.

So would new reality competition formats, from The Mole to The Circle, which would place mental strategy at their center. Other shows would place Kelly’s strengths, from challenge wins to relationship-building, at their center. Watch Survivor: Borneo, and you’ll see a player forge a path that will affect everyone who comes after him, and a television show that changes the game for an entire genre, and the world.