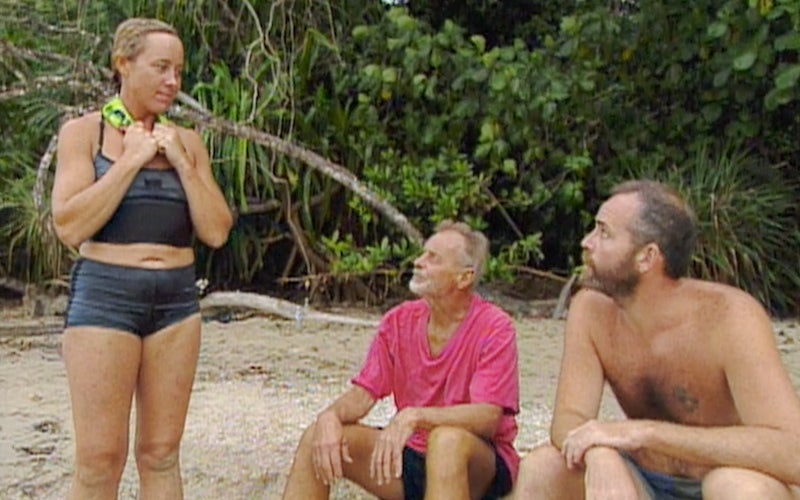 Sue, Rudy, and Rich discuss voting off Kelly or Sean during the Survivor Borneo episode 11 immunity challenge (Image from Survivor)

The title of the episode, “Long Hard Days,” refers to the survival struggle that the remaining players are going through, but this episode also feels like it lasts for several long, hard days. It’s doing a great job of showing us the slog—though there’s a massively underplayed betrayal, with Rich, Sue, and Rudy considering voting Kelly off instead of completing the Pagonging.

“You’re actually being sacrificed, even though you were supposed to stay,” Richard says when he casts his vote. That completing the Pagonging was not Rich’s goal, or the alliance’s, is pretty stunning. Colleen, infected with sores and haunted by memories of her “team,” only joins the jury because Kelly has immunity.

The immunity challenge was excruciating, and surprisingly boring for an endurance challenge, perhaps because I’m used to more extreme versions that don’t last very long.

When Rudy fell off, and I assume it was to escape Rich and Colleen screaming the “bottles of beer on the wall” song. But then Rich fell off—and then foreshadowed future Jeff Probst by doing play by play from the beach. Probst was around, as he kept swimming out to remove planks, but he disappeared between segments.

But it’s what happened after Rich and Sue dropped out: they discussed, with Rudy, who to vote out if Kelly won immunity, and settled on Sean. That’s so surprising to me, even though I’ve seen this before!

The Tagi alliance seems ready to not complete the Pagonging and vote Colleen off, but instead, vote off either Kelly or Sean. Why not just get rid of Colleen first? How did they not see Colleen as a threat with a jury full of Pagong?

Ultimately, they do vote out Colleen, but not with Kelly’s help: she voted for Sean, and Sean voted with the alliance, making the final vote 4 to 2.

Were the Tagi Four actually the Tagi Three?

My memory is of the “Tagi Four,” an unbreakable alliance, that took four people from very different backgrounds all the way to the end of the game together, until they had no choice to fracture. But it was not that simple, nor did it go that way.

The first glimmer of the alliance we had came from Sue and Kelly, and it eventually solidified into Rich, Sue, Kelly, and Rudy once Rudy jumped aboard.

But Kelly’s anxiety about the alliance led her to jump off and stop voting with them, resulting in Rich very nearly being voted off. And two episodes later, Rich, Sue, and Rudy seem ready to vote off Kelly, but are thwarted when Kelly wins the immunity challenge.

There is one bond that seems solid. “It’s you and me to the end, period. I’m giving you my word,” Rich told Rudy. “You’re the only one I’ve been able to trust from the beginning.” We’ll see how that plays out in a few more weeks.

While this is a stunning turn of events, most of the episode focuses on the reward challenge and its outcome, and moves slowly, like a yacht drifting through the ocean and carrying the contestant that, 20 years ago, I repeatedly referred to as “Dr. Dumbass.”

The challenge was a trivia contest was answered with a pre-printed giant block, just like Big Brother continues to use for its HOH games. But Probst had to tell the players to all look forward because there were no partitions dividing them, so they could cheat off each other. Rudy was thrilled to have a mental instead of physical challenge: “good news, not that my brain’s any good,” he said.

Sean won reward by answering a question about drinking kerosene, which seems appropriate. At first, I didn’t entirely understand this timeline, but he definitely went back to camp instead of just going onto the yacht immediately, and may have spent the night and enough time for a major storm to pass by. Probst showed up to get Sean, and jumped off a boat and almost face-planted.

Although Sean was given a day of warning that he could choose someone to have breakfast on the yacht, and told Kelly he’d choose her, when Probst finally offered it, Sean hemmed and hawed. He asked Kelly if she wanted it, and she was like, don’t put this on me. And I loved what Sue screamed out at him: “Yeah, Sean, get some balls and make a decision.”

So Sean chose Rich. That guy.

After Sean got his bare ass slapped by a masseuse, we found out why there was such a long delay: Sean’s father was pretending to be the boat captain. I should have seen this coming, since we’d previously heard Sean saying he missed his family more than anything else.

This first family visit, like so much of Survivor, isn’t weighed down by expectation or the need to one-up something. While it is mediated by Jeff Probst—he’s the one who puts on the charade of introducing Sean to the captain—he doesn’t demand they hug for him and verbalize their love for each other. He doesn’t even say the word “love” in that creepy way he does now, having turned it into a present that he gets to hand out.

Sean’s father not only spends the night, but goes back to camp, and shares information about the world—well, they asked him. “He didn’t know anything,” Sue exclaimed. “He’s just like Sean: lovable but a doof.”

And since I’m well aware of the final four on Survivor: Borneo, even if I forgot the intricacies of their relationships, I know that the doof’s time in the game is about to come to an end.