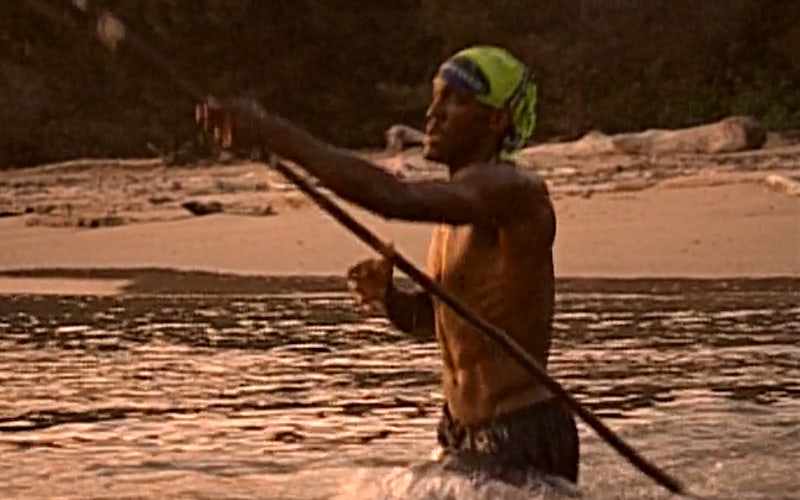 Gervase's torch goes out during a twilight immunity challenge, foreshadowing what would happen at Survivor Borneo's 10th Tribal Council. (Image from Survivor)

The players don’t yet know it, but the question hanging over Survivor: Borneo is one that will be a fundamental part of Survivor moving forward: if and when to break with an alliance in order to get yourself further in the game.

Strategizing has fully entered the game now, and Jeff Probst’s recap at the beginning of the episode even breaks down the vote at the previous Tribal Council for viewers so we know what happened. At Tribal, he even brings up Sean’s strategy again, though there’s a voice-over (added in post-production) in which he really explains what happened: “It resulted in Jenna being ejected.”

There’s more hand-wringing about alliances, and a sort of epiphany for Kelly, who realizes that Survivor is “about surviving yourself. She insists that she didn’t want to join an alliance because she considers it “conniving and dirty and untrue to myself. … It’s not worth it to feel like shit for the rest of your life for a little bit of money and your 15 minutes,” she adds, comparing herself to Luke Skywalker joining the dark side briefly.

At Tribal Council—or the “immunity council,” as Rich calls it earlier—Sue Hawk uses a phrase that I’ve found myself using over the years to describe Survivor, and now I know where to attribute it: “This is just a chess game,” she says.” She adds: “It’s the way life goes.”

Rich, amusingly, plays dumb when Probst asks him about an alliance: “Is there?” He also says, “Who knows what’s going to happen?”

Of course, I know what’s going to happen, and I can’t change that while rewatching, but it’s still thrilling to watch Sue and Kelly repeatedly entertain the idea of splitting up the alliance—and specifically, voting out Rich.

“Do I try to beat him at his own damn game?” Kelly asks. Sue says, “I’d rather just me and Kelly burn him.”

Even Rich recognizes this possibility: “If the alliance were to break down and something else happened that I wasn’t aware of, I would shake those people’s hands and say Congratulations, brilliant, good job, you got it, because you fooled me.” I’m sure a lot of people were rooting for that to happen.

Alas, it’s not to be, at least not this week, because Rich wins immunity, and is safe for at least one more week. The Pagonging continues, and Kelly re-joins the alliance in voting out Gervase. (So does Sean!)

Part of these strategy discussions really develops Sue and Kelly’s relationship. “Right now, I don’t trust anybody except for Kelly,” Sue tells a camera. “I trust Kelly 100 percent, 100 percent, and she trusts me the same. We’re like sisters.”

Sue even breaks down crying, thinking about her dead best friend, and linking that bond to the connection she now has to Kelly. That is unbreakable, Sue says, indicating that she won’t turn on Kelly in pretty forceful terms: “I ain’t gonna fuck her. I’m not burning her.”

From that conversation, we cut to Rich, who gives some foreshadowing: “I don’t know if Kelly is as solid as that all the way through,” he says, adding, “I’m feeling very good about Sue.”

Gervase gets significant focus this episode—probably because he gets voted out, but also because he wins the reward challenge and learns that his fourth kid was just born.

He receives a note at tree mail, along with cigars for the tribe, which is very sweet and also very 1965. Coincidentally, the reward challenge includes a phone call home (sponsored by a cell phone that also looks like it’s from 1965), in addition to a slice of “oven-fresh pizza.”

Yes, we’ll have to wait 19 years or so for Survivor to deliver a much more appetizing award: a pile of cold, sloppy pizza sitting in the sun during the entire challenge:

The Survivor: Borneo pizza arrives via helicopter, which arrive accompanied by “Ride of the Valkyries.” Gervase also shares his single piece, giving everyone a bite.

The reward challenge itself is kind of dud: a cool collection of balance beams over the water, but each leg of the race is over in a couple seconds, and it’s often too close to see what happened.

The immunity challenge is better: it’s almost the first fire-making challenge, except for the part where the contestants don’t actually have to make the flame part of the fire. They just have to gather driftwood, and then they wade into the ocean to light a torch.

In both challenges, Probst is once again very encouraging. During the immunity challenge, Gervase is way behind because his torch has gone out and he has to re-light it, and Probst tells him not to worry instead of, you know, berating him for being a loser like 2020 Probst would do. Probst also says, gently, “That’s it” to Rich as he lights his fire.

It’s surreal to watch challenges without non-stop shouting, but I’d completely forgotten about the encouragement!

When Gervase makes his phone call, there’s a lot of gossip about Gervase and his relationships, which is really unsettling to watch. Nearly the whole tribe seems to have opinions on Gervase’s relationships and children, and I cannot recall the editing giving this much attention and detailed critique of any other player’s life outside of the game.

That they’re critiquing a Black man’s role as father is particularly awful because of the stereotypes about Black fathers that they’re echoing, even if that’s not intentional and they’re not doing so explicitly.

Some of the conversation seems to have followed from previous conversations—Colleen references the relationship Gervase has with his current partner—but why not show those conversations, with Gervase contributing? Why just give us white people judging and talking about him while he’s not around?

After Gervase gets the birth announcement, Rudy takes the opportunity to share something that at first is interesting, a sign about how much progress has been made. He points out that, when he was younger, the stigma of being pregnant and unwed would lead girls or women to basically disappear, presumably to have an abortion. Rudy uses this as a jumping off point to judge Gervase. “I’ll agree with an abortion, but not having kids out of wedlock.” He later doubles-down on this, blaming the woes of the nation on broken homes, saying kids “need a family.”

Of course, Gervase’s kids do have a family, and a father. And what’s happened to him, as Rich points out, is pretty typical: a relationship that produces kids but ends, followed by a new relationship that also results in kids. I wish the episode had used this time to let us hear Gervase himself talking about his kids and family—if he wanted to do that, of course.

On an entirely different note, my favorite line in this entire episode may come from Rudy, who looks around camp and says to the camera, in front of everyone, “I’ll probably never see these people again.”

It’s hilarious he says that with everyone right there, but also because it’s just not true: there will be the reunion for this season, charity events, and, of course, his appearance later on Survivor: All-Stars.

The Survivor experience extends far beyond the 39 days, nine of which remain in this season.