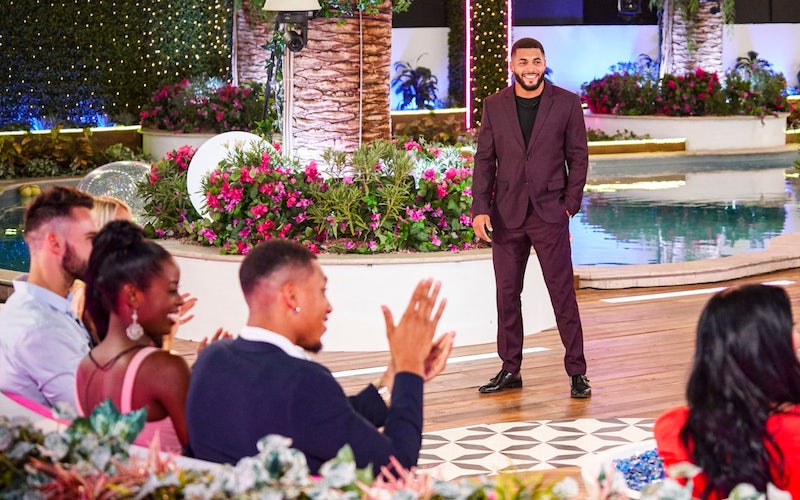 Johnny Middlebrooks gets ready to choose a partner and break up an existing couple on the premiere of Love Island season 2. (Photo by Adam Torgerson/CBS)

Love Island USA is back on CBS, trading its actual island resort on Fiji for the pool of a Las Vegas hotel—a “disinfected rooftop we’re calling an island,” to quote narrator Matthew Hoffman, who’s still providing wry commentary that gently needles the show’s contestants and, more rarely, the production.

The cast arrives in “swimsuits the size of your face mask,” as Hoffman said, because there is no pretending that anyone is tuning in for anything with depth. Love Island makes Holey Moley look like the Mariana Trench, a metaphor I have used before but will repeat because Love Island is just doing the same thing it did last year—and, of course, it’s basically a remix of the lightest, fluffiest parts of dating reality TV.

And that is just fine. It’s so far almost identical to season one’s premiere in structure and tone, even repeating some of the same jokes. What’s changed is the cast and the location, though seeing the fake Eiffel Tower looming nearby, or traffic on the Las Vegas strip, is somewhat comforting compared to the isolation of the Fijian resort, and fits perfectly with Love Island’s neon aesthetic.

Just like season one, it started with by introducing five women, and then bringing out men one at at a time. The five women could step forward if they were interested—and then the man could choose woman they wanted, regardless of the woman’s interest. The couplings were entirely up to the men.

The predictable twist—the show brought in an additional contestant to eventually break up one of the couples—was different only because it brought in another man, Johnny, while season one brought in a woman.

Love Island season 2 does have a major twist waiting, though it’s one that Love Island UK introduced in its third season: Casa Amor. Typically, that twist involves the couples being split up, with half taken to a new villa, and all of them getting new partners for a few days, to see if they’ll like the new options or stay with their old partner.

This format led to a repeat of a familiar pattern on reality TV. The only Black woman, Justine, was the only woman not selected, and ended up in a “friend zone” coupling with Jeremiah. Meanwhile, while there are three Black men, one of them, Tre, is being criticized for tweeting that Black men “don’t want” Black women, and saying he “want[s] my future kids to be mixed w something else.”

While Justine was left without meaningful connection—which in the Love Island universe is simply someone a contestant wants to hook up with and doesn’t mind sharing a bed with—she and Jeremiah acknowledged at the end of the episode that they were starting to connect.

And then, in a producing move worthy of Allison Grodner, the show decided create additional heartbreak for her. Jeremiah got a fake text announcing that a new woman wanted to have a secret hot tub date with him, and immediately left Justine so far behind she might as well be in Fiji.

Will Love Island deal with this, either its own twists or the underlying issues with race? I’d say probably not because I hope that it would, but I’m also deluding myself here.

It’s one dimensional by design—which is absolutely fun sometimes, but is kind of too bad. While its cast members mostly look pretty and act dumb, there is depth to some of them. Justine is, according to her CBS bio, “a survivor of the Rwandan Genocide” who “immigrated to the U.S. with her family in 2001,” and also a Christian who wants to find a man with “her same religious beliefs.”

But all of this complexity gets edited down into a cliche of a reality TV dating show storyline: unwanted, sad, hope, dumped.

Love Island barely has narratives and scenes; it’s a collection of moments and asides, separated by that jaunty theme music, and then scored to well-chosen dance and pop songs. And it pulls you from scene to scene, episode to episode, by the prospect of what will happen next.

There will be eight hours every week of this, for an as-yet-unrevealed length of time, coupling and re-coupling, people leaving, people being added to the cast, Matthew Hoffman making fun of them (“They’re holding hands before they hook up? Where do they find these animals?”).

At the start of the episode, Arielle Vandenberg made one of her rare appearances—to be a host of a reality TV show who is rarely actually on that reality TV show!—and said that the contestants can “jump into the safe waters of Love Island.” I’m not so sure those waters are appealing to me right now.

As much as I can appreciate the need for light, meaningless entertainment, it felt too empty. I’m sure many people will delight in having Love Island to fall into every night, and I’m thrilled they have it.

While I can completely understand the appeal of eating an entire bag of zero-calorie potato chips with the knowledge that you’ve consumed zero calories, I still feel hungry afterwards. I loved the show’s tone and style and approach last summer, but this late summer, after six months and counting of unnecessary death, the tone is landing differently with me.

I’m all for fun, dumb shows, and I definitely am looking to TV to escape, but these two hours were somehow too dumb, too escapist, too empty, too disconnected from any kind of reality, to give me any kind of satisfaction. Rest assured: it’s me, not you, Love Island.