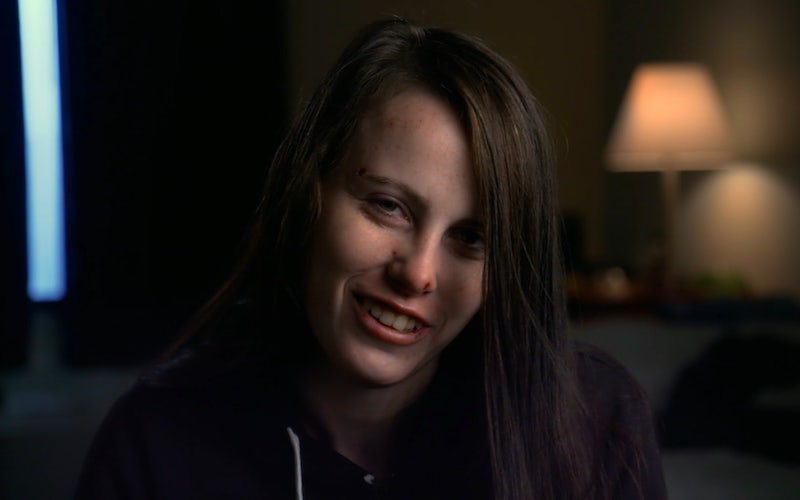 Do you know why all the Interventions are in Canada this season? —Tanya

Good catch! There’s a good reason for that, although I didn’t realize it until you asked. A&E hasn’t really promoted Intervention season 21, which premiered July 20, following new episodes of Hoarders.

When Intervention returned last summer, it was also set in one geographical location (Philadelphia) and focused on one kind of addiction: opioids. Its six episodes were serialized, and told “the stories of addicts as they work to overcome their opioid addictions as well as one of the most dramatic recoveries in one of the largest drug hubs on the East Coast,” according to A&E.

But that’s not what’s happening with this season. Intervention season 21 has returned to the show’s original format, following one addict’s story per episode.

The episodes do have some clues about what’s going on, besides the Canadian locations: they end with title cards noting that they were the recipients of Canadian tax credits from The Canadian Film or Video Production Tax Credit, and that financial services Royal Bank of Canada. They aren’t just set in Canada, they’re Canadian productions.

All of these stories are set in Canada because what A&E Is broadcasting are episodes of Intervention Canada.

A&E is re-broadcasting various episodes from the Canadian version of the series, and not in any kind of clear order. The episodes “Melanie” first aired on CBC Documentary Channel in October of 2018 and “Robin” aired in September of 2018 as part of its fourth season. But “Chelan” premiered in 2017 as part of season 2, according to a TV Guide listing.

In Canada, the series premiered on Slice, and then moved to T+E for its fifth season.

A&E is labeling its broadcast of these episodes as season 21, and giving them new episode numbers, which continues the tradition of rebroadcasting international shows in the United States and confusingly renumbering and renaming them.

The Intervention fan site Intervention Directory is keeping track of Canadian episodes as they’re rebroadcast, if you want to know when an episode originally aired.

Can I watch past seasons of The Great American Baking Show?

Do you know how I can watch past seasons? They are nowhere to be found, like other baking shows. I can find the one spinoff season with Jeff Foxworthy, but none of the other seasons of this show. Would love to see them! —Lauri

The Great American Baking Show, which sometimes has the subtitle “Holiday Edition,” has now aired five seasons on ABC.

It’s undergone a lot of change, including completely changing its cast: Season-one hosts Nia Vardalos and Ian Gomez, and judges Mary Berry and Johnny Iuzzini, are no longer with the show for various reasons. Last season was hosted by Anthony Adams and Emma Bunton, with judges Paul Hollywood and Sherry Yard.

Iuzzini was fired from the show and season three was pulled off the air after multiple women said he sexually harassed and abused them.

The very first attempt at an American version of The Great British Bake-Off, which was called The American Baking Competition, hosted by Jeff Foxworthy, and aired on CBS in 2013, is actually available: it’s on Amazon.

It’s not bad, but it’s not as true to The Great British Bake-Off as the ABC version is. That’s because CBS attempted to Americanize it by doing things like adding a cash prize.

Alas, the five seasons of ABC’s version, The Great American Baking Show, are not available to watch, stream, or buy: They’re not on ABC’s web site, or Hulu, or anywhere.

But it does offer an option you might want to take advantage of: “Track it to get notified when it is.”

Ironically, the only season where there are substantial clips available online is season three. After pulling the season off the air after two episodes because of the accusations against Iuzzini, ABC produced recaps summarizing each of the four episode that had not yet aired. Those short four-minute videos are on Facebook; here’s Dessert Week, and here’s French Week, the semi-finals.

Hopefully, ABC will make it available on Hulu or even Disney+, where it would definitely feel at home.