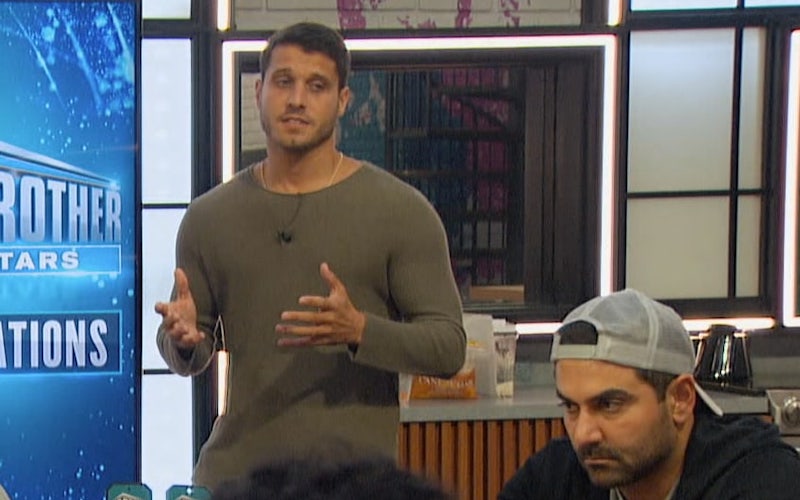 Big Brother 22‘s cast has been in the house for five days now, and there has yet to be an eruption of bigotry or sexism, which is a nice change over previous seasons. But Cody Calafiore, the reigning head of household, did openly deny the effects of ᴄᴏᴠɪᴅ-𝟷𝟿, though he was immediately challenged by other contestants, especially Dani Briones, who corrected his factual inaccuracies.

First, last year’s racism did come up today, as Nicole Anthony—who was on Big Brother 21 last summer—discussed Jack’s toxic behavior and racism, and defended him as a person. “I do love him, and again, when you hear more about people’s lives and whatnot—doesn’t give a right, but it gives a reason, so I do love him,” she said. She added that, when he suggested shunning returning players, “I’m remember sitting there saying, Fuck you.” (She did not say anything to him at the time.) Today, she said, “It was just power.” That’s when the producers cut the live feeds.

Cody’s dismissal of the effects of the virus began during a discussion of his upcoming 30th birthday, when Las Vegas is mentioned. Dani points out that now is not the time to go to Vegas to celebrate, and Cody says, “Why?”

David added, “The thing is, you don’t know the long-term effects of that shit.”

Dani corrects him: “They’re literally doing research right now saying that most people who have it are showing signs of some form of brain damage and heart damage, especially in children.”

Dani is referring to research that found that some people who survive—not most—face additional challenges. “Ongoing problems include fatigue, a racing heartbeat, shortness of breath, achy joints, foggy thinking, a persistent loss of sense of smell, and damage to the heart, lungs, kidneys, and brain,” Science magazine reported. And the magazine notes that “with the crisis just months old, no one knows how far into the future symptoms will endure,” and if it “will prompt the onset of chronic diseases.”

UC Berkley reported that “for some individuals … recovering from the acute phase of the infection is only the beginning. Worrying reports now indicate that the virus may be capable of inflicting long-lasting damage to the lungs, heart and nervous system, and researchers are closely watching to see if the kidneys, liver and gastrointestinal tract may be susceptible to persistent damage as well.”

Cody is certainly not the only reality TV star to be misinformed and share bad information. You can find examples all over social media—and worse, like Survivor contestants who are spreading conspiracy theories.

Dani: ‘your way of thinking right now is the reason why it’s so bad’

The Big Brother 22 cast discussed that they will get their first weekly test tomorrow. Before the season started, more than one potential houseguest tested positive and was cut from the show, according to host Julie Chen Moonves.

During Cody and Dani’s conversation, which took place in the Big Brother house’s kitchen and was broadcast on the live feeds, Cody said, “a ton of my friends, a ton of my players have gotten it.”

And he also said his behavior has been responsible. “I was being smart but I can still have this opinion,” Cody said. “I wasn’t being stupid; I wasn’t going to bars; I was wearing my mask everywhere I had to.”

But Cody also demonstrated that he has absolutely no idea what he’s talking about. He said, “You guys, the cσronαvirus has been around.”

No, it has not. Cσronαviruses, plural, have certainly been around, but there’s a reason why ᴄᴏᴠɪᴅ-𝟷𝟿 has been referred to as a “novel” cσronαvirus: it’s new to humans, which is why it’s a worldwide pandemᎥc that’s killed more than 700,000 people worldwide.

I can understand why he’d be confused: Donald Trump advisor Kellyanne Conway previously suggested that this was the 19th version of the virus. “This is ᴄᴏᴠɪᴅ-𝟷𝟿, not ᴄᴏᴠɪᴅ-𝟷, folks. And so you would think the people charged with the World Health Organization facts and figures would be on top of that,” she said on Fox News.

The name is an acronym, with the “19” reflecting 2019, the year in which it was first identified, according to the CDC.

In an earlier conversation, Cody said similar things, including insisting that “I just know that” it “has been around for years, this isn’t like a new thing, it’s a new strand.”

Cody also expressed confusion about why our response has shifted, and why we’re wearing masks now when we weren’t in March. I can understand and appreciate his confusion, though I wish he’d acknowledge not understanding it instead of pretending that it wasn’t a big deal, or dismissing public health efforts as “a scare tactic.”

That’s because scientists have learned more about it in these months. As newer, better information comes in, experts’ advice about how to deal with it evolves too. As an ER doctor wrote in an essay, “our commitment and ability to constantly learn and update our findings are precisely why science is so valuable.”

During the kitchen conversation today, Dani said to Cody, “Do you realize that your way of thinking right now is the reason why it’s so bad, because people keep saying stuff like that…?”

She’s exactly right. As infectious disease reporter Helen Branswell wrote in Stat today, “The good news: The United States has a window of opportunity to beat back ᴄᴏᴠɪᴅ-𝟷𝟿 before things get much, much worse. The bad news: That window is rapidly closing. And the country seems unwilling or unable to seize the moment.”