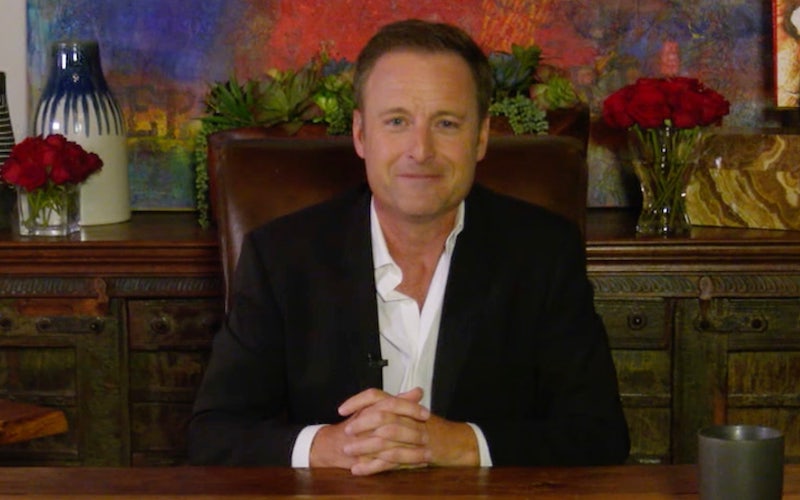 Chris Harrison on the Kaitlyn Bristowe episode of The Bachelor: Greatest Seasons Ever (Image via ABC)

The Bachelorette 16 is turning out to be an historic season, and it’s not even done filming yet. Already the star of the show has left and was replaced, and the franchise now has its second Black lead in its history, Tayshia Adams. And as of today, host Chris Harrison can’t actually host the show, having left the production’s bubble to take his son to college, so he’s being replaced—temporarily—by a former Bachelorette star.

Joshua has appeared on television frequently this summer, operating a camera for his dad’s segments of this summer’s useless spin-off, The Bachelor: The Greatest Seasons—Ever! Slate‘s Heather Schwedel wrote that “Joshua-spotting has become a way to liven up otherwise boring rehashes of old storylines.”

Tuesday, Chris posted photos to Instagram showing Chris with Joshua in a dorm room, and Joshua with two other young men who all have their arms around each other. No one is wearing a mask in any of the photos. Texas Christian University says it “requires all community members to wear a face covering that covers both the nose and the mouth of the wearer anytime they are in a public indoor space.”

That was Tuesday. Today, an “insider” told Us magazine:

“The moment he got back, Chris was told he could not set foot back on the set until he went through another 14-day quarantᎥne. The show’s contestants and crew all had to quarantᎥne on the property for 14 days prior to the camera’s rolling. But it didn’t dawn on Chris he’d have to do it all over again if he simply left to take his kid to college.”

It didn’t dawn on him, really? He just left his job and came back and only then learned that leaving was a problem? Did he actually surprise the production by just leaving, perhaps by jumping over a fence while a sad man followed him, calling his name? None of that makes any sense.

Former Bachelorette season 12 star JoJo Fletcher will host while Harrison is in isolation, and then he’ll return for the last few episodes.

Us reported that she’ll host “for two weeks,” but Reality Steve pointed out that the Us story doesn’t seem right, noting that the cast and crew only spent about a week in isolation before filming, and also noted that “missing 14 days would be way more than 2 rose ceremonies.”

Could this possibly a pre-planned departure/replacement that they’re just turning into a publicity stunt—or that tabloids have turned into the most dramatic thing ever?

Deadline reports that yes, that this “was planned,” with Fletcher “ready to step in” and “expected to emcee the show for a couple of episodes before Harrison comes back.”