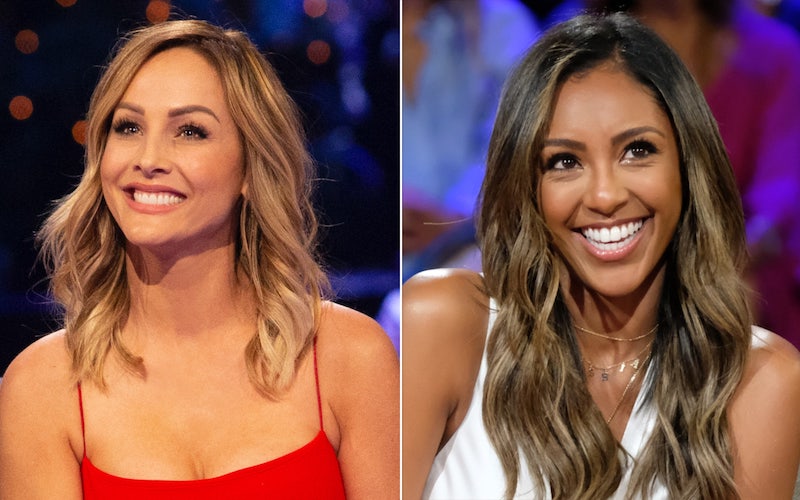 Clare Crawley (left) and Tayshia Adams (right), who may both be starring on The Bachelorette season 16. (Photo of Clare by Paul Hebert/ABC and Tayshia by John Fleenor/ABC)

The Bachelor franchise is known for its annoying hyperbole, with every season, every scene, every decision being the most dramatic ever!! It rarely lives up to its own hype.

But The Bachelorette season 16, which is currently filming at the La Quinta Resort near Palm Springs, may actually live up to that, with an incredible mid-season twist that, whether it was organic or manufactured, would be unlike that’s happened on the show before: Bachelorette star Clare Crawley being replaced by Tayshia Adams.

The Bachelorette began filming on July 19, and after less than two weeks, Life & Style reported Thursday that Clare “told producers she no longer wanted to participate in the show” because she was in love with love with Dale Moss (a former football player who was on the practice squads of the Green Bay Packers and Tampa Bay Buccaneers, and Chicago Bears), and decided not to continue with the charade.

The magazine’s source said that Clare “blindsided” producers and “refused to come out of her room. … Producers are scrambling to figure out what to do. They are frantic trying to pick up the pieces without having to start over completely.”

The solution: bringing in a new Bachelorette star.

Tayshia is a phlebotomist who was on Colton Underwood’s season of The Bachelor, where she was one of the final two women before Colton decided to choose someone who he’d already eliminated. She’s also been on Bachelor in Paradise.

That news of her casting first came in a report posted to Reddit late Friday, which said that producers “are recasting [Clare] with Tayshia. Tayshia is already quarantᎥning at the hotel and they should be taking her phone on Friday (today). The plan is for her to call back some of guys that have already been eliminated.”

The Reddit post attributed this change to “production … having a lot of problems with Clare during filming,” including Clare deciding not to participate in planned events.

Reality Steve confirmed that “guys who were cut and never made to night 1 were reached back out to in the last week and asked back,” and on an Instagram Live, reported that Tayshia is in La Quinta, California.

On Thursday, Tayshia posted a photo to Instagram, and Bachelor producer Julie LaPlaca commented with a series of black hearts and fire emoji, which other Instagram users took as confirmation of her casting.

How will this work for the television show?

That, of course, depends upon what really happened behind the scenes—if Clare quit, or was fired, or if this was part of the producers’ diabolical plans all along.

There are so many possibilities, and those are compounded by the weirdness of this season, which meant that Clare knew who was on her cast before filming began. (Clare is the oldest Bachelorette in the show’s history, and even before production was delayed, her suitors were partially recast to bring in some older contestants.)

A lot of Bachelor and Bachelorette stars know immediately who among the pool of potential Instagram influencers they’re most interested in, but go through the motions with the rest of the cannon fodder, so the show can have something to fill several episodes of television. That’s just standard practice.

So why might Clare give up and be done, if that’s what she actually did? No other Bachelor or Bachelorette star has had to film an entire season in a single, locked-down hotel: no all-expense-paid trips to other countries, no stays in breathtaking resorts and dates in spectacular locations, no hometown trips to meet family members.

So maybe Clare was like: Why bother, now that I’ve found someone? She was already annoyed in April that some of the men cast for her season were already capitalizing on their fame.

What happens with what’s been filmed over the first two weeks? I doubt the production just trash what it already filmed with Clare: ABC has already heavily promoted her season for months, and the show lives for this kind of drama, so I can’t see them pretending it didn’t happen (unless something awful happened behind the scenes that they don’t want to make public).

Assuming Clare was just done early in the process, and finds the love of (the next few months of) her life, ABC could just use this to just produce two separate seasons of The Bachelorette, stretching out these two weeks into more episodes than usual. Of course, if they keep the same suitors and stay in the same filming location, that’d be difficult to make into two distinct seasons.

That’s why I think it’s at possible that this season will be extended past the standard 10 episodes, perhaps a few episodes for Clare and then a full season’s worth of episodes for Tayshia.

Considering the need for content that ABC (and every other network) has right now, it’d make sense to just get more television out of the same investment in time and resources.

If all of this is accurate, it’ll be interesting how it plays out, starting with whether ABC announces Tayshia’s casting now, or tries to withhold that until the show premieres this fall.