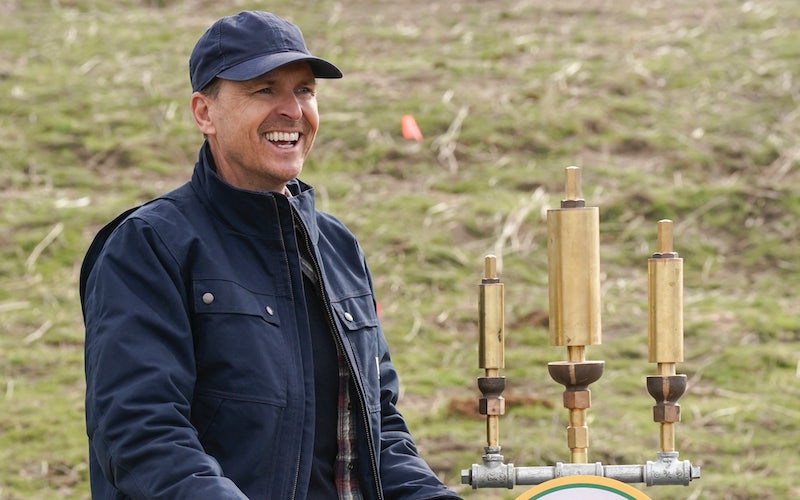 Amazing Race 32 host Phil Keoghan with the work whistle he blows at the start of each challenge on his new show, Tough as Nails. It's finally time to start TAR 32. (Photo by Monty Brinton/CBS)

CBS announced its fall schedule on Wednesday, and that includes the conclusion of its two summer reality shows—both of which got late starts—and also the premiere of The Amazing Race 32, which has been scheduled before.

The schedule doesn’t look like a normal fall, with more unscripted and reality TV than usual, because scripted shows are mostly not yet in production, and also three shows you may have seen elsewhere, like on Pop or CBS All Access.

Big Brother 22 will end on Oct. 28, a Wednesday, and have a two-hour finale. Typically, the show has a 90-minute finale, as it’s paired with a 90-minute premiere of Survivor.

But there will be no new season of Survivor this fall. I’m disappointed CBS isn’t rebroadcasting Survivor: Borneo or even a later season instead. They are, however, bringing Star Trek: Discovery to broadcast, airing its first season on Thursdays at 10 starting Sept. 24.

That means its second season will last just over one month, like its first season. I’m a little surprised they’re not extending it for several months, though they burn through cast members quickly and bringing new people in has to be one of the more—if not the most—challenging parts of producing right now.

And, of course, there’s the show we’ve been waiting for for almost two years now…

TAR 32 finally gets (another) premiere date

The Amazing Race 32 is setting some kind of record the way it’s being bounced around. Filmed almost two years ago, it was in limbo for quite some time.

It was scheduled for a May premiere, and then pulled off the summer schedule.

Last month, CBS did say TAR 32 would air in Survivor’s Wednesdays at 8 timeslot this fall, but didn’t give a premiere date. Now we have that: Oct. 14 at 9 p.m.

It’ll follow Big Brother that night, but move to its regular timeslot, Wednesdays at 8, the following week, when it’ll air its second episode before the finale of BB22.

The Amazing Race 32’s cast is all-new teams—at least, new to TAR, though some of them may have familiar names.