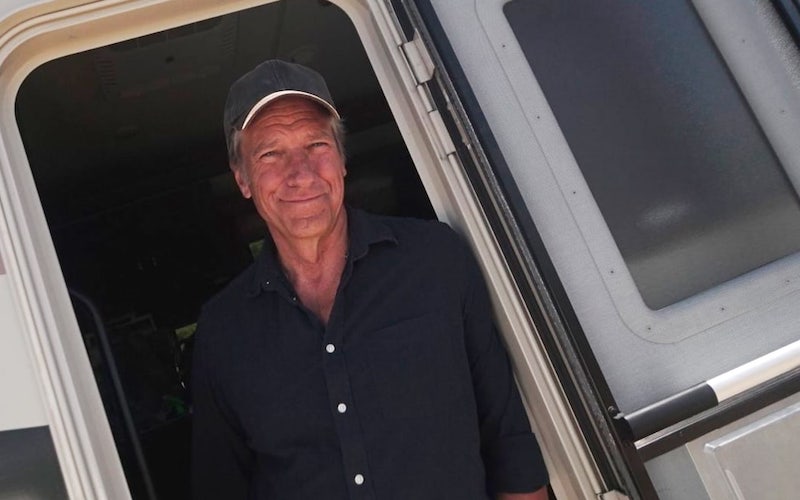 Mike Rowe in the RV that he and a small crew drove around the country for Dirty Jobs: Rowe'd Trip (Photo by Discovery Channel)

Good Monday morning. I hope you had a safe long weekend. Yesterday was the 20th anniversary of the premiere of Big Brother, which I wrote about, and gathered 20 stories about.

While some Big Brother fans worked themselves into a frenzy last week, imagining that the cast was already sequestered and the show would start soon, the reality is that the show has only just started pre-production work on the house, and there’s no clear idea when it might actually be able to safely start filming. Ditto for Survivor; just last week, Jeff Probst said the show does not even have a plan yet for resuming production.

However, there is a new CBS reality competition premiering—and one that’s hosted by The Amazing Race host Phil Keoghan, though it is not TAR. It’s one of two shows that celebrate American blue-collar workers premiere this week.

Phil’s new reality competition Tough as Nails premieres with the first two episodes airing back to back (CBS, July 8, Wednesdays at 8).

The show promises to test contestants “for their strength, endurance, life skills and, most importantly, mental toughness in challenges that take place at real-world job sites.” I’ll have a review up Wednesday.

Meanwhile, Mike Rowe and Dirty Jobs are back, although with a slightly different version of their original series.

Dirty Jobs: Rowe’d Trip (Discovery, Tuesdays at 9) follows Mike and his original team as they “set out on a road trip across the country to revisit past jobbers and tell new stories,” according to the network.

Mike wrote on his website that they were intending to film a real season of the show, but obviously couldn’t do that because of the state of the world right now. “My hope, back in March, was to be out in the world right now with the old gang, doing a brand new batch of Dirty Jobs episodes,” he wrote.

And since “traditional production has been impossible,” a small crew, that was tested first, lived in an RV and filmed this four-episode special show.

Amy Schmuer’s work to create a stand-up special and baby are the subject of her new docuseries, Expecting Amy (HBO Max, Thursday).

After premiering with a special preview last week on NBC, Cannonball moves to its regular home (USA, Thursdays at 8).

Alas, Cannonball is terribly boring! But the NBC preview did much better in ratings than ABC’s Bachelor recap show, so I wouldn’t be surprised to see it back on NBC in some form.

Down to Earth with Zac Efron (Netflix, Friday) follows the actor as he travels and learns about sustainable living.

Tonight, Antiques Roadshow has a special episode titled “Women’s Work” (PBS, Monday, July 6, at 8), on which “appraisals will highlight women, from the well-known to the unsung, through their interesting, thought-provoking objects and accomplishments.”

Unladylike2020 is a project of American Masters that tells “the stories of extraordinary American heroines from the early years of feminism.” There’s a special this week (PBS, Friday, July 10, at 10), but also 26 short films you can watch online.

It’s been 100 years since women were granted the right to vote in the 19th amendment to the Constitution, and the women who pushed for that change are profiled in American Experience: The Vote (PBS, Tuesday, July 6, and Wednesday, July 7, at 9). It’s is a four-hour, two part documentary that “delves deeply into the animating controversies that divided the nation in the early 20th century –– gender, race, state’s rights, and political power –– and offers an absorbing lesson in the delicate, often fractious dynamics of social change,” PBS says.

In 2017, the UN said that, in Chechnya, there was an increase in “abductions of men perceived to be gay or bisexual, carried out by local militia and local security forces and followed by arbitrary detention, violence, torture and other ill-treatment.” That includes “physical and verbal abuse, torture including with electric shocks, beatings, insults and humiliations,” plus being “forced to give contact details of other gay people and threatened with having their sexual orientation disclosed to their family and community—a move which could put them at risk of ‘honour killings’.”

The new documentary Welcome to Chechnya, which premiered on TV last week and is now streaming (HBO and HBOMax), follows “LGBTQ activists as they work undercover to rescue victims and provide them with safe houses and visa assistance to escape persecution,” according to HBO.

World’s Smallest Woman: Meet Jyoti (TLC, Thursday, July 9, at 10) profiles a 12-pound, 24-inch-tall woman as she “visit[s] the U.S. from India to explore career opportunities and soak up American culture, from bowling to shopping to pizza,” and also tries “to find a doctor to address a debilitating health issue she has endured for years—two broken legs.”

Finally, Crikey! It’s the Irwins: Life in Lockdown (Animal Planet, Saturday, July 11, at 9), promises it will “catch up with Terri, Bindi, Chandler, and Robert Irwin as they care of the 1,200 animals at the place they call home, the Australian Zoo,” according to the network.