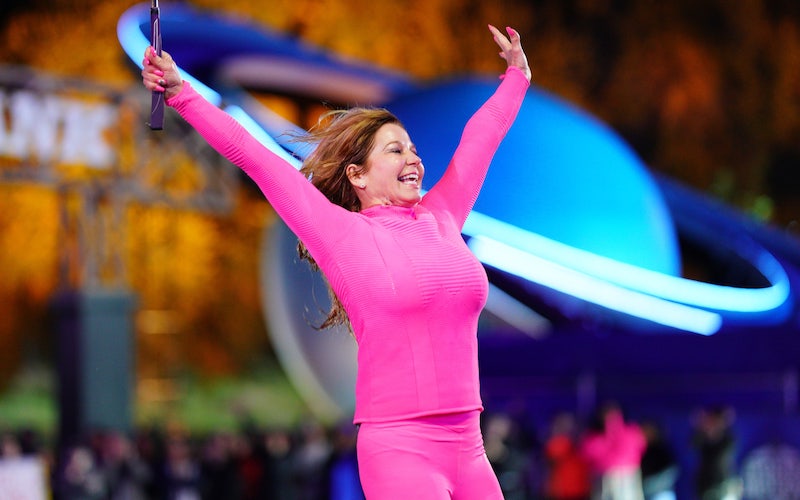 Cynthia Navis celebrates on Holey Moley, one of the reality shows nominated for a 2020 TCA Award. (Photo by Christopher Willard/ABC)

Of the six reality shows nominated by TV critics for the Television Critics Association’s 36th annual awards, only two have been nominated before: Making It and Top Chef.

That’s because the others nominated in the TCA Awards’ Outstanding Achievement in Reality Programming category are new to the category, and also new to television since last year’s TCA Awards: Netflix’s Cheer, Disney+’s Encore, ABC’s Holey Moley, and HBO’s We’re Here.

Making It was nominated last year; Top Chef All Stars was nominated in 2011, the very first year that that the TCA Awards had a reality TV category.

The only one of those shows that’s not in its first season is Holey Moley, which aired its first season last summer, but was not eligible to be nominated for last summer’s TCA Awards, because it premiered in late June, and the awards covered shows from the 2018-2019 television season. Encore aired one episode as a special on ABC, but premiered as a series last season on Disney+.

Overall, this is an excellent group of unscripted nominees, with a mix of competition and docuseries, and I’m thrilled that my fellow TV critics chose such a great array of unscripted shows. (I should disclose that I’m member of the TCA, and thus voted for nominees and will vote for winners; I’m also on the TCA’s board of directors, which administers the awards.)

Television Critics Association members chose nominees by voting for up to four shows and/or people in each category, and the top six (or seven, in the case of a tie) shows received nominations.

TCA members will now vote to choose winners, and those will be announced later in the summer. (Browse all the past TCA award winners.)

The awards are usually presented at a non-televised ceremony as part of the summer Television Critics Association press tour, but both the ceremony and the press tour have been cancelled this summer, unfortunately.

Here are all the shows and people nominated for TCA Awards this year. There are two other categories—Career Achievement, and the Heritage Award—which will be announced along with the winners later this summer.

OUTSTANDING ACHIEVEMENT IN NEWS AND INFORMATION