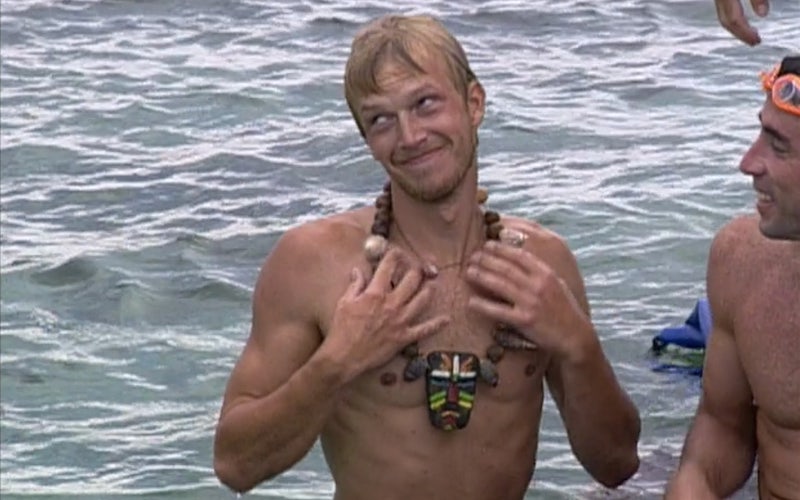 Survivor Borneo's Greg Buis mugs for the camera after his episode 7 immunity challenge win. He was voted out in episode 8. (Image from Survivor)

“I don’t wanna go home,” Greg pretended to cry when he was voted out of Survivor: Borneo. He made Jeff Probst smile. But the words “it’s time for you to go” were spoken far too late for me, because he’d worn out his welcome.

The same was apparently true for Rudy, who (jokingly) volunteered to murder Greg. Greg’s reward for winning a one-shot archery challenge was sending a video message home, to his sister, and Rudy chimed in and said, “Then we might have to kill him. Is that doing you a favor?”

Rudy was somewhat appalled at what Greg said to his sister in the video. “It sounded like Greg was maybe talking incest—that’s the way it sounded to me,” Rudy said later. It’s clear to me that Greg was not doing that, just babbling and riffing in whatever character he was playing.

And in his final episode, it got really ugly. Colleen described Greg as “a friend and somebody who’s my equal,” explaining the connection they had, which is far more interesting than a showmance.

But Greg described her as a kitten, ending his metaphor with this horrific punchline: “you look right in the kitten’s eye and snap its neck.”

Seeing Greg’s sister do similar riffing tells me that they’re goofballs who like to have fun and joke around. And maybe that’s what Greg has been doing all season, but it just never seemed authentic, and also crossed a line with that kitten thing.

Mostly, he just didn’t seem to be there to play the game, but instead to get the camera’s attention.

It clearly worked: he became one of season-one’s breakout stars. But I would have also been interested to see more of Greg the player. As Jenna pointed out, Greg’s game did shift once the merge happened, and he did seem to have awareness that there was a game.

In this episode, there’s an interesting moment during a nighttime conversation when Rich asked the other men if they’d been with other guys, and Greg said, “I mean, well…” Greg said in an interview that, “instead of directly shutting him down, I only played his game back.” Rich is aware of this psychological game, and is kind of thrilled by it: “he’s trying something that I’m very, very wary of, and that’s great.”

The editors’ attention to the game play is increasing, between this conversation and the collection of scenes that opens the episode.

At the start of the episode, Rich said Gretchen was voted out because “she is bright, and is strong. She was a threat.” Later, Gervase defends what he suspects some members of Tagi are doing (though he’s not yet sure, and needs more evidence): “alliances are fair game.”

Not everyone thinks that, though. Talking about Gretchen being voted out the night before, Sean told Greg, “The duplicity of the whole thing is pretty bad. Because people went out of their way to befriend her, and those are the people that subsequently voted against her.”

“Yeah, that’s the game,” Greg said, apparently about to help Sean understand why they are all there. But then he added: “duplicitous sleaziness—if you want to play it that way.”

Kelly, who was not part of that conversation, said in an interview, “This is a game; don’t take it personally. If people came here to make bosom buddies and, you know, lifelong friends, they should have gone to summer camp.”

All of this packed tightly at the start of the episode. It’s not quite the post-Tribal Council reckoning we’re now used to, but it’s moving in that direction.

In other alliance talk, Sue said there’s a proposal for a women’s alliance—though that potentially first-ever Survivor women’s alliance ends before she finishes talking to the camera, because she insists that “ain’t going to happen.” She’s solid with Rich, Rudy, and Kelly: “I’ve already got mine—I like mine.”

While Rich is obviously part of that alliance, he’s projecting a provider image instead, which he repeated at Tribal Council, the idea that he’ll just keep feeding everyone.

He also indirectly, vaguely threatens everyone. Rich arrived back at camp with a shark (!) that he caught with his hands (!!) and three sting rays, and also his ego. “Which one of you sons of bitches wrote my name on a card last night?” he asked. This comes off as both a joke but also a threat, and I couldn’t quite tell if it was wounded ego or strategy to remind people of his value. But he did admit that he wanted everyone to know what he’s doing, saying in an interview, “I squeeze every ounce of credit out of it that I can.”

The reward challenge brings the first visit from loved ones, though it comes via home movies, not flights to Borneo for family members. Jeff Probst showed up to camp in a boat, and delivered a giant crate, inside of which was a TV.

One by one, he slid tapes into a player and showed a few moments of each player’s loved one talking. The actual reward was being able to watch the full video tape, and record a message to send back home.

Everyone watched a pretty significant preview of their tape, except for one: Jenna. The episode previously spent time on her homesickness, and she is clearly the most excited about seeing her tape, because she wanted to see her kids.

At the end, though, she got nothing. “We never received a tape back,” Probst told Jenna, which feels like such a weak excuse, blaming her family. But also, this wasn’t exactly the era when they could just fire up Skype and record a message.

Probst does promise her that, if she won reward, she’ll definitely be able to send a tape home. “I’ll put it in the overnight myself tomorrow,” he said, as if that is enough to guarantee anything.

The reward challenge was so minimalistic: it was at camp, and players each got one shot with a bow and arrow. “Congratulations, man,” Probst told Greg, who celebrated by remaining seated in the sand. So low-key!

While Jeff has still not yet found a groove with challenges, he is starting to push harder at Tribal Council, becoming more of the audience surrogate that he’ll definitely be later in the series. “What brought you here, if it’s not the money?” Jeff Probst asked Colleen, and got her to admit that the money was important to her.

The votes come in for Jenna and Greg. Rich’s confidence when casting his vote—”Talk to you later Greg!”—is a direct indication of what will happen, though at the time, we didn’t know that. Greg didn’t just get the Tagi four’s votes: he also got Sean’s vote (since G is next in line in the alphabet) and Jenna’s vote. Pagong is slowly being Pagonged.