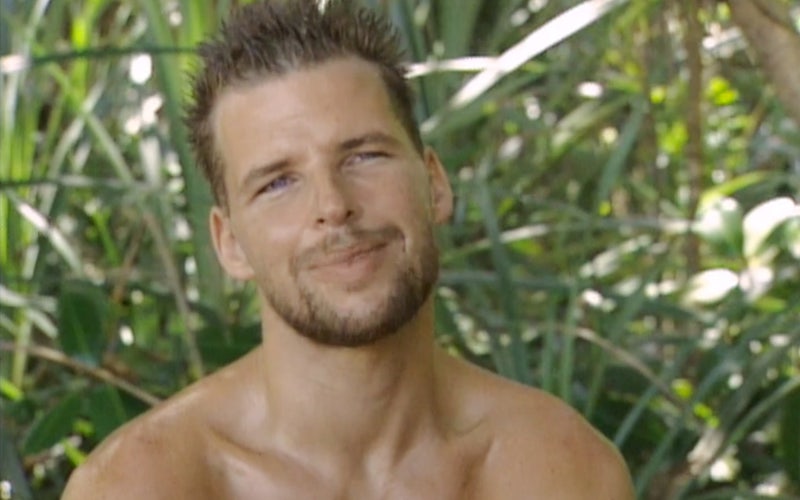 There’s something hanging over the sixth episode of Survivor’s first season, and Jeff Probst pops up in the woods at the very beginning to tell us about “the impending merger” of these “separate societies.” Not only do the tribes know when it’s coming in season one, they actually start showing some awareness of the game—or the editors finally start showing it.

Well, maybe not everyone. Pagong is “playing island 90210,” Kelly memorably says. “They’re just here to look cute on TV—I don’t know.” That definitely seems to be true of some players whose names I won’t mention GREG, but Pagong is also ready to Pagong another tribe!

Yes, this is the episode that eventually causes Pagong to be turned into a verb, because Tagi wins immunity and the tribes merge evenly. Otherwise, Pagong would have had a 6-4 advantage going into the merger.

It’s Gervase who predicts exactly what’s going to happen, though he’s imagining it’s his tribe that will have the power: “We stick together” and “just wipe them out, pick them off one by one.”

It’s also Gervase who gives the episode its title, “Udder Revenge,” a reference to something sexist Gervase said off-camera. From the title to an extended sequence of short scenes, the episode seems to be setting up Gervase to be voted out.

First, there’s what he describes as his “poke at the girls.” Jenna recaps this as Gervase saying, “women are the stupidest thing on the planet next to cows,” but Gervase recaps it as “girls are the stupidest…” He says he’s apologetic and calls it “stupid,” which is an understatement.

That scene is totally fair game, but what comes after it Survivor at its worst. The episode next shows us several images of Gervase sitting around camp, laying down and playing cards, lounging on the fishing raft, and saying, “I haven’t done a thing out here since I’ve been here, seems like, and that’s cool,” he says.

Yet it is Joel who’s voted off the island for being a “chauvinist,” as he repeatedly insists he’s not, and/or for thinking about post-merge strategy too early. Gervase receives zero votes at Tribal Council. In fact, it’s Jenna who receives two votes, from Joel and Gervase.

So why does Survivor spend so much time focused on Gervase’s camp life, perpetuating a stereotype that black men are lazy?

And keep in mind: laying around camp is pretty much what everyone does most of the time on Survivor, even today. Camp life is boring, except in those moments when it’s not.

There is a montage of Joel being condescending to women, constantly offering them advice and assistance they don’t need nor have they asked for. “He has to explain everything so thoroughly that we just couldn’t understand without Joel,” Jenna says.

Joel defends himself by saying, “No, I definitely am not a chauvinist,” and then rolls his eyes. Notably, though, the episode doesn’t follow any of this with a montage of Joel doing nothing around camp. Only Gervase gets that treatment.

With the merge approaching, Pagong prepares by eating all its chickens, so Tagi can’t have any, and Sue prepares by rattling off what she thinks of the other tribe: Greg is “way too psychotic,” and she also calls Gervase “a pervert.” What in the actual hell?

Let’s start with the fact that they’re on opposite tribes, so they’ve had limited contact, we do know that Survivor producers told each tribe things about the other. Still, her judgements seem out of left field and don’t match what we’ve seen, and I say that as someone judges people constantly.

Also at Tagi, Richard Hatch is walking around naked, though he insists to the camera, “I’m naked less than 1 percent of the time.”

This arrives at the same time as a stronger hint of Richard’s ego. “I think I’m in control of who’s being voted off, and I think that’s all that matters to me,” he says.

Meanwhile, Rudy joins the Tagi three to become the Tagi four. “I finally went along with this alliance,” he says. We don’t actually know what the alliance has decided upon or what it’s doing, since Tagi doesn’t go to Tribal Council.

Not that Tribal Council is all that revealing: Jeff Probst tries to stir up drama by mentioning Gervase’s cow comment. Gretchen takes the bait and calls out Gervase—but basically stops herself, saying, “We’re not really supposed to say,” as if somehow identifying other players by name at Tribal is against the rules. Of all the elements of Survivor, Tribal really has evolved the most.

One big thing changed at Tribal: Probst finally started to keep a running total! “Two votes for Joel, two votes for Jenna,” he said. My husband and I have been keeping track of the votes out loud in our living room, so when Jeff actually said it at the same time we did, that was a surprise.

The episode’s two challenges both had military themes, and while I’m glad the show has dropped those, I wish it’d do more night challenges, like the reward challenge. That’s basically just a scavenger hunt in an old barrack, while it’s not quite a fully-formed challenge yet, the nighttime visuals, with the players running through the jungle with flashlights, definitely made it more interesting.

Their reward challenge tree mail notice arrived on a can without a label, and that they assumed to be dog food yet ate anyway. I searched and could not find any reference to whether or not it was dog food. (Somehow, I doubt it.)

The show did hide the immunity idol on Snake Island, forcing the winning tribe to paddle out and shoo away snakes in order to retrieve it, which is such an odd choice, but fits in well with how awkward those challenge conclusions are, because Probst and the editing hasn’t yet figured out how to make it a big moment.

The immunity challenge is a tough run, even with the players able to wear sunglasses to protect against the sun and glare from the water. It’s a multi-stage course, testing physicality, agility, and thinking: there’s a section where the tribes have to navigate using planks of wood. That’s where Tagi takes a tiny lead, but it is still so, so close, with Tagi barely beating Pagong. That’s how close we were to Tagi becoming a verb.