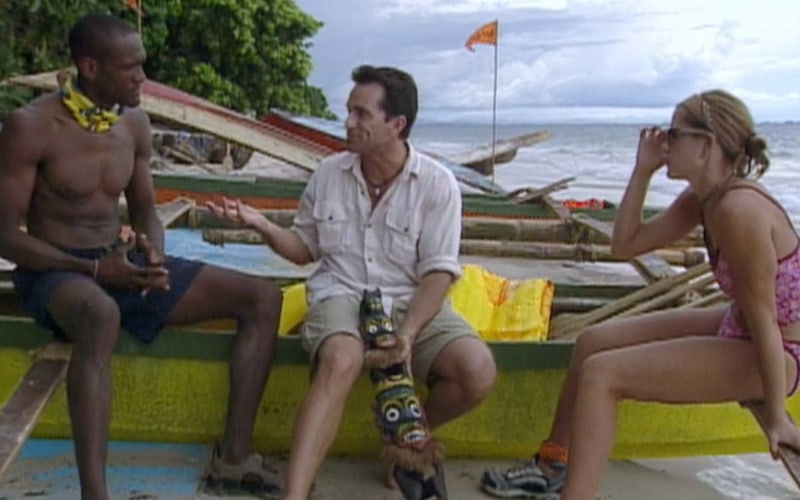 With each episode, Survivor is finding its way more and more into a a more familiar episode structure. This week, we opened with a scene establishing the two likely boots, Sean and Dirk. What was still stunning is how neither of them seemed to be playing a game for $1 million, even though that’s what they were on Survivor to do.

The episode more directly foreshadowed Dirk’s exit with what I think may be the first cocky declaration of safety that’s followed by that person being voted off. “I think I’ll be here tomorrow,” Dirk said. “I’m a valuable member of this team.” (Upon being voted off, Dirk said the experience was an “unbelievable blessing” and revealed that God “had 15 days planned for me on this island.” Why would God end Dirk’s fun like that? Also, I really hope God has better plans for Survivor 41 than fire tokens.)

At camp, Dirk sat in the hammock and read his Bible, and Rudy shat all over that, literally. “The only reason I’d bring a Bible is if—” Rudy says, and then pauses. “I mean, I’m religious, too—if I needed toilet paper.”

Sean said, “I just wanted to be happy have a nice life here, and that’s it.” That’s it? (Sean also calls it “Immunity Council,” to add to our Survivor malapropisms list.) Thankfully, Sean’s life improved when he pooped, which he announced to everyone.

Maybe Sean and Dirk were both cunning strategists and total gamers and the editing cut that out. But what we definitely saw is each of them basically focusing on the experience as fun first, game not at all. It’s great to have fun! But why go on Survivor to read your Bible?

Meanwhile, and also at Tagi, three other people were playing to win. Rich said he and Kelly and Sue are deciding “who we’re going to eject,” and it’s clear their options are Sean or Dirk, and they’re leaning toward Sean.

Richard Hatch also told the camera that Survivor is an “interesting game, but it’s a game and I’ve had a strategy since day one.” I’m kind of waiting to see his cockiness and arrogance really show up, because this seems so, so tame. Maybe it’s just because those who followed in his footsteps were much more ruthless, and he seems tame by comparison. Also there is that villainous thing he does to Rudy toward the end of the game.

In another illustration of contrasts, Dirk and Sean sat on a boat all day and catch nothing, while Rich continues diving and finding seafood. This episode, he caught an eel. That follows Tagi’s loss during the reward challenge, so various tribe members are all dismissive about the chickens that Pagong won, and so delighted they get to eat eel instead. And then they saw the eel being cooked and watched Rich saw it with a knife, and the camera showed us each of their distressed faces. Amazing TV.

Rich also knocked a deadly snake out of a tree, and talked about it while a camera operator got some dramatic shots that really seemed to piss the snake off, and that was before Rich flung the snake in the ocean “because I want to watch it swim.” Rich said, “we’ve been told they’re extremely deadly” but swatted away at bugs as the snake hovered a few feet away. “Horseflies bother me more.”

Tagi put up the parachute from the Target reward as a tarp, and labeled it “Rowdy Rudy’s Diner.” Pagong’s camp was a complete mess, and their apparent leader, Greg, was emptier and blanker than most every Bachelor stars. He had an ear infection but the editors didn’t even let him talk about that; we heard about it from someone else.

We did hear from Greg when he left the shelter—not enough room for him and his energy there—and he built a mat to sleep on in the woods, perhaps with Colleen. How did these two become such breakout stars again?

Challenges that focus on individuals, and stereotypes

That reward challenge was yet another that allowed the tribes to practice, and was introduced not just by Jeff Probst visiting camp, but nailing a sign to a tree to announce “The Battle in Borneo.”

That battle took place in three rounds: blowgun, slingshot, and then spear-throwing. Sue Hawk is great with the spear and got all excited about the possibility she’d defeat and humiliate Pagong’s spear-throwing guy, who turned out to be Joel. “There’s a good chance that I can dog some guy on national TV,” Sue said, and I still don’t know what “dog” means as a verb but I love it.

I’d forgotten the outcome of the challenge, so it was pretty dramatic, though very laid back in its actual presentation. Both challenges were that way: I could just see how the show would edit those today to really play up the drama and personal failures (and victories) that are the center of each challenge.

Both challenges were very nearly individual challenges, in that they didn’t require team effort, but individual performance. A barefoot Jeff Probst even told Kelly and Gervase, “It’s all on you guys.”

The failure in the immunity challenge belongs to Kelly, river guide, rower, and “water all-star,” as she called herself. She and Gervase had to paddle outrigger canoes out to a buoy and then stop on the way back to pick up each of their tribe members, who were wearing life preservers (!) and floating in the water.

Gervase opted to row because of his inability to swim, though he also said that he relished the challenge: “I like the spotlight,” he said.

I think it’s worth acknowledging and examining how, with its very first black male cast member, Survivor perpetuated a stereotype. It’s not the fact that Gervase couldn’t swim or was uncomfortable in the water—that’s just a fact, after all—but that the show kept returning to that, over and over, allowing it to define him and reinforce a stereotype without contextualizing it in any way.

This episode included a moment of Jenna defining Gervase by his inability to swim, saying it is his central weakness: “We all are going to have our differences. Not all of us are going to be strong in everything.”

Worse, after the challenge, we saw Kelly, who was understandably sad about the loss, cite a very peculiar reason for her distress: “I got beat by a guy who can’t even fucking swim,” she said. What exactly does that have to do with Gervase’s ability to outrow her? Nothing, of course. Sue Hawk did immediately challenge the absurdity of that statement: “Yeah, but he wasn’t swimming,” she said.

As Sasha Torres argued in Black, White, and in Color: Television and Black Civil Rights, Survivor “is always organized by the most transparently racist and ethnocentric tropes,” including, in season one, by “African Americans who either couldn’t work (Ramona) or couldn’t swim (Gervase).”

Ramona, whose exit came in the preceding episode, told NPR today that the stereotyping that the show did was damaging to her. “I became the lazy person, which is the furthest thing from the truth. That really upset me and it took me a long time to get over it,” she said. “To realize, we signed our life away. They can do whatever they want to do.”