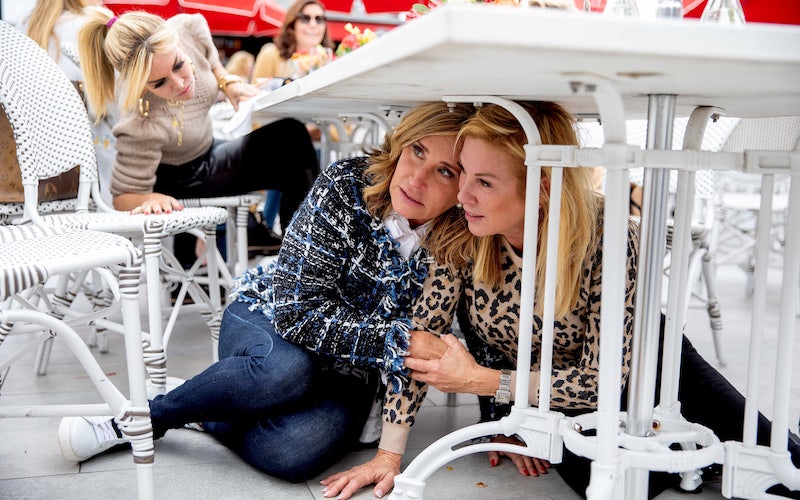 Tinsley Mortimer looks at Sonja Morgan and Ramona Singer under a table during The Real Housewives of New York City season 12, episode 9. (Photo by Scott Eisen/Bravo)

The Real Housewives of New York City has always been my go-to version of the sprawling Bravo franchise. I’ve watched consistently because RHONY’s conflicts are nearly always minor and absurd, and the self-righteous responses are usually so disproportionate.

There’s equal parts yearning and delusion, and while there have been very serious, real-life moments, it’s usually just self-seriousness about things that don’t have much consequence, like Luann complaining via text about having a suite of rooms all to herself in the basement of Ramona’s house.

It’s clear that most of these people would not hang out with each other if they weren’t being organized together by producers for a reality show, but they’re game to do it anyway. In the past, they’ve typically recovered quickly from their slights and fights, which helps keep the whole thing buoyant.

But this season has been different.

There’s nothing wrong with having a few drinks and having a good time, even if that ends with a tumble out of a chair or into some bushes. While I’m not going to diagnose anyone, what we’ve seen this season goes far beyond that, to MTV’s Challenge levels of drunkenness and destruction.

When a drunk Dorinda leaves a dinner because it’s too crazy, and when Luann is accusing someone else (Sonja) of being “a caricature of herself,” you know there’s a problem.

At the beginning of the season, when new cast member Leah McSweeney was introduced, she seemed for a moment like she might be the sane one, a proxy for viewers who can help us make sense of what’s going on. But then she got crazy drunk with several others and trashed Ramona’s poolside tiki torches.

In an interview, Luann said, “We are not perfect. We do a lot of crazy things, us a group, but Leah’s crazy, it’s just a new crazy.”

She’s right, but it’s really a new crazy for the entire cast. What’s worse is that it’s all so one-note and frequently disturbing.

After drinking, Dorinda becomes a heat-seeking missile, targeting Tinsley and then Ramona and even Luann. Ramona commented that Dorinda used to go from “zero to 100” for a little while, and now goes “zero to 1,000 for 30 minutes … it gets very, very vicious, and almost evil.”

This is a behavior problem, but it’s also a producing problem. It’s like Bethenny Frankel left RHONY, and so did everyone who knew how to make a coherent TV show. Nearly all episodes start with a handful of boring scenes that advance nothing, and then jump to a gathering where Sonja or Dorinda are already drunk and screaming before anyone else can even find the bar.

This season took a couple weeks off earlier this summer, and when it returned, I let the most-recent episodes pile up on my DVR, because I just had no energy for that energy, especially now. And that included the annual trip to the Berkshires, which happens to be one of my actual favorite places and also consistently hosts some of the best RHONY episodes (“MENTION IT ALL!”).

When I finally dipped in, the overall tone of the season hadn’t changed, but there was one key difference: some interviews have been filmed remotely. They’re shot in the cast members’ homes, not in front of green screens.

That is understandable and responsible, yes, but also bizarre and jarring, and I’m not just referring to the awkward audio levels and backdrops. Why is Luann being interviewed about her Halloween party sometime after mid-March? And why are only some of the interviews this way, while the others were shot in a studio?

They call attention to the way the episodes are assembled, and every time a recent interview pops in, it seems like a piece of tape slapped over a rip on a sweater: evidence of where the editors and story producers needed something to hold scenes together, so they called up the cast and had them fill in the gaps.

The only one of these interviews that has actually added anything so far is episode 12, when Ramona is being interviewed (in front of her refrigerator?!) and her daughter Avery walked by in the background and told her, “Mom, stop wasting your energy talking about Elyse.”

Who is Elyse? Besides a perfect metaphor for this season

I do want to talk about Elyse, though: Who in the actual hell is she, and why does she pop up in so many scenes?

Sometimes you can watch her as she grabs a crowbar and pries her way into every moment that’s getting a camera’s attention, which is very impressive. But she’s also included in the forced socializing. She’s at Ramona’s house, she’s at Dorinda’s house, she’s sitting between Dorinda and Sonja in a car on the way to the Halloween party, she’s getting invited to Blue Stone Manor.

Why is she around so much? Why is she getting interviewed when she’s not even an official “friend,” the designation the show gives to people who are not yet full cast members?

Bravo’s own website had to ask, Who the heck is Elyse Slaine, who keeps showing up on ‘RHONY’? Alas, its article doesn’t really answer that question, except to repeat Elyse’s claim that she’s responsible for introducing Bethenny and Jill Zarin.

Normally I’d give someone all the credit in the world for turning themselves into a cast member like this, but her presence feels so random, especially when she becomes the focus of the action.

But Elyse is the perfect cast member and metaphor for the season: drama popping up from nowhere, with no explanation as to where it’s coming from, why it’s there so much, or storyline to attach itself to.

That’s most noticeable with Dorinda. There’s no dimension to her rage; she’s just a cartoonish villain, and that only goes so far. RHONY keeps letting Ramona accuse Dorinda of having real issues, but is not developing that, perhaps because there’s nothing there, or perhaps because Dorinda doesn’t want to talk about whatever’s underneath her outbursts.

Besides Elyse’s random presence and Bethenny’s exit, there have been two major changes to the cast: Leah joined and Tinsley left.

Tinsley’s exit is certainly fine by me, because it saves me from having to fast-forward through the scenes where her loathsome mother Dale berates her for not being enough like a 1950s-era Disney princess and delivering grandchildren to her. And in scenes with the other women, Tinsley was basically just serving as a target without being able to fire back.

In season 12, there have been some very typically RHONY moments— levity from peeing in a corn maze, aggressive massages with branches in a bathhouse spa, Dorinda putting the fish-room’s shark in Luann’s bed in her newly redecorated house, Ramona attempting to plunge a toilet. The camera operators are still doing great work to give us hilarious contrast, including Martini Mike.

But so much of it just disconnected outbursts. During the Berkshires trip, I was thinking that the show’d managed to reset, with the climax being Luann kicking Sonja out of her cabaret show when Sonja asked for more money.

But then the drama turned to more abject cruelty, word-slurring drunkenness, and apparently, literal destruction. The only damage I want to see is to someone’s overinflated ego.

“We are officially what you call off the fucking rails,” Leah said early in the evening. She might as well have been talking about all of season 12.