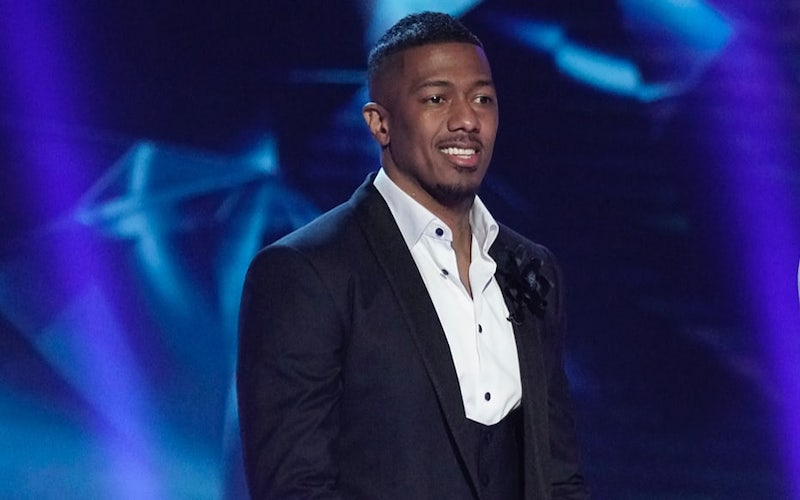 Nick Cannon was fired by VH1, dropped from the show that carries his name, Nick Cannon Presents: Wild ‘N Out, but will retain his job hosting Fox’s hit The Masked Singer, after making and then defending anti-Semitic comments.

Fox says that Cannon is “remorseful” and only “inadvertently promoted hate” in a conversation on his podcast that took place in June but only recently gained traction online. His talk show has also been pushed back to 2021.

On an episode of his podcast, “Cannon promoted anti-Semitic conspiracy theories” and “praised Nation of Islam leader Farrakhan and his ideology,” USA TODAY reported, noting that “the Southern Poverty Law Center recognizes Nation of Islam as a ‘hate group.'”

A ViacomCBS representative told The New York Times, “While we support ongoing education and dialogue in the fight against bigotry, we are deeply troubled that Nick has failed to acknowledge or apologize for perpetuating anti-Semitism, and we are terminating our relationship with him.”

Very early Wednesday, Nick posted a long note to Facebook that “Viacom’s goal to keep me from providing for my family and lineage will be foiled. They can try to kick me while I’m down or force me to kiss the master’s feet in public for shame and ridicule, but instead I stand firm on my square with my fist in the air repeating my mantra, ‘You can’t fire a Boss!'”

He concluded by writing:

“As for Viacom, who is now on the wrong side of history, I will continue to pray for you. I don’t blame any individual, I blame the oppressive and racist infrastructure. Systemic racism is what this world was built on and was the subject in which I was attempting to highlight in the recent clips that have been circulating from my podcast. If I have furthered the hate speech, I wholeheartedly apologize. But now I am the one making demands. I demand full ownership of my billion dollar “Wild ‘N Out” brand that I created, and they will continue to misuse and destroy without my leadership! I demand that the hate and back door bullying cease and while we are at it, now that the truth is out, I demand the Apology!“

ViacomCBS has not apologized, nor handed over control of his show. Late Wednesday evening, Cannon apologized for his initial comments, writing:

“First and foremost I extend my deepest and most sincere apologies to my Jewish sisters and brothers for the hurtful and divisive words that came out of my mouth during my interview with Richard Griffin. They reinforced the worst stereotypes of a proud and magnificent people and I feel ashamed of the uninformed and naïve place that these words came from.”

Thursday, he posted to Facebook that he will take a break:

“I have decided to take some time away from my radio show so I can commit myself to deeper, more thorough reflection and education. I will use this time to establish an action plan towards real, impactful change and advocacy aimed at bringing people together. I continue to express my gratitude to the Rabbis, community leaders and institutions who have reached out to me to help enlighten me. Their input and friendship will help me as I further commit myself to more profound learning and towards strengthening the bond between the Black and Jewish cultures every day going forward.”

Unlike ViacomCBS, which owns VH1, Fox is standing by the host of its hit reality competition The Masked Singer, and so are the producers of his forthcoming daytime talk show.

Nick’s talk show, called Nick Cannon, was going to air in 90 percent of the country this fall, but producers Lionsgate’s Debmar-Mercury said in a statement that it “will not debut this year.” The studio said that “we do believe that his public comments don’t reflect his true feelings and his apology is heartfelt and sincere,” and added, “We are standing by Nick in our hope that by fall 2021 he will be able to use his extraordinary talent and platform to entertain, enlighten and unite his audience on the Nick Cannon talk show.”

Fox is similarly standing by its talent. The network said in a statement:

“When we were made aware of Nick Cannon’s interview with Richard Griffin on YouTube, we immediately began a dialogue with Nick. He is clear and remorseful that his words were wrong and lacked both understanding and context, and inadvertently promoted hate. This was important for us to observe. Nick has sincerely apologized, and quickly taken steps to educate himself and make amends. On that basis and given a belief that this moment calls for dialogue, we will move forward with Nick and help him advance this important conversation, broadly. Fox condemns all forms of hate directed toward any community and we will combat bigotry of any kind.”

“Inadvertently promoted hate”? That’s what Cannon says he now understands, as he explained in a later post:

“On my podcast I used words and referenced literature I assumed to be factual to uplift my community, but instead turned out to be hateful propaganda and stereotypical rhetoric that pained another community. For this I am deeply sorry, but now together we can write a new chapter of healing.”

But his conversation on the podcast was with Richard Griffin, a rapper known as Professor Griff, who, when he was a member of Public Enemy in the late 1980s, repeatedly said hateful things about Jewish people and gay people, including “There’s no place for gays” and, “If the Palestinians took up arms, went into Israel and killed all the Jews, it’d be all right.”

What is definitely true now is that, while Nick Cannon may have apologized, and while his anti-Semitic remarks and initial defense of them drew condemnation and scorn, they were also defended and embraced by some people—and that continues to reverberate and affect others.

In an essay in The Undefeated titled, “I’m a Jew of color. I won’t be quiet about anti-Semitism,” Soraya McDonald wrote how, between Cannon’s comments and Diddy’s defense, “I felt a familiar pang of betrayal, disappointment and anger — the same pang I’d felt two years ago when Alice Walker, a personal hero of mine, praised an anti-Semitic author as ‘brave’ in The New York Times.”

“This week, in the wake of Cannon’s statements and subsequent firing, and Diddy’s rush to embrace him, my stomach turned anew when I saw messages like this one on social media. It was genuinely chilling, and this time, the anti-Semitism was coming from people who looked like me, people who attended the same historically black university as me and reveled in the school as a place of Black pride and intellectualism, just like me.

But unlike in that long-ago journalism class, now is not the time for me to shrink back, to remain quiet.”