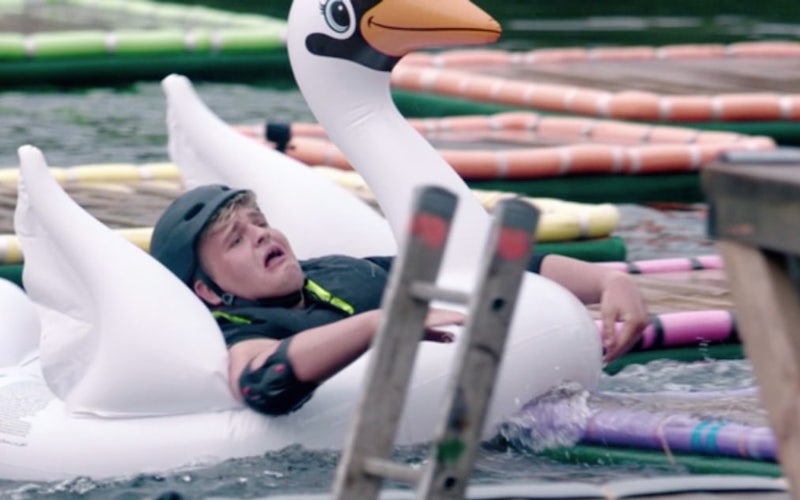 The reality TV I am in this mood for this summer is silliness and fun. ABC’s Holey Moley is leading the way, and I just don’t ever want its season to end. Other shows have offered varying degrees of frivolity, from Netflix’s Floor is Lava to USA’s Cannonball.

So it’s the perfect time for Killer Camp (The CW, Thursdays at 8), a playfully stupid UK show that ends each episode with a hilariously corny murder of one of its contestants. As a reality competition, though, it has a few near- fatal flaws.

The show first aired on ITV last fall, and The CW acquired it for US broadcast, saying that “in typical reality show fashion, there will be camaraderie, sex appeal, and lots of backstabbing… only this time, literally. As the campers play games to earn cash during the day, each night one of them will meet their untimely demise in ever more extreme, hilarious and inventive ways. Nobody can be trusted, as one of the campers among them is actually the secret murderer controlling the evil camp handyman ‘Bruce,’ who executes the bloody hilarious death scenes.”

While there are pretend murders, Killer Camp is actually far less of a scripted hybrid like Whodunnit and Murder in Small Town X, and more of a mash-up of other competition shows. There’s very little that’s scripted and fake besides a clever, well-made opening sequence that introduces us to the cast, and the aforementioned faux murders.

What the show offers is a mix of Big Brother-style challenges and The Mole’s game: One of the players is a saboteur cast by the producers, and that person is the “killer.” The killer just orders the killings; the actual killings are carried out by a masked man, “Bruce,” the camp’s handyman. That’s how the killings can occur without the “murderer” disappearing from the group.

Challenges for money, clues, and immunity

Each episode has three challenges, and they’re lightweight but ebullient fun—though the editing of them leaves a lot to be desired. The challenges are bizarrely cut together in a way that makes it hard to follow a contestant or team’s progress from one moment to the next, because it’s constantly jumping around to different camera angles and different moments in time.

The first challenge earns money for the group’s pot, and any money they don’t earn goes directly to the contestant who’s secretly the “killer.” At the end of the season, those not killed will split the pot.

The second challenge rewards clues to the killer’s identity. It’s a team challenge in the first episode, and each member of the winning team gets one single, pretty generic piece of information. They’re given this in private, but can share with each other. We’re told that, if the killer is a person who wins that challenge, they’ll be given false information, so there’s a possibility of misinformation floating about.

The third challenge is the most important, because it’s for immunity. Its winner can’t be killed that night.

The challenges play on camp tropes and also are clearly designed to produce physical comedy, and they do. There’s also the potential that someone is sabotaging the challenges, though so many contestants have so much trouble that there’s a lot of competition for suspicion.

While Killer Camp was filmed in Lithuania, the setting of its Camp Pleasant is meant to evoke an American summer camp where a horror movie takes place, i.e. Friday the 13th‘s Crystal Lake.

The cast/campers are all in their 20s, except for one 19-year-old, and are all over-the-top personalities, yet they’re not immediately irritating, even during the clearly scripted opening sequence, which introduces them all. They were told they’re going on a show called “Summer Camp,” and the producers had alternates ready in case any of the cast bailed once they learned the real premise.

It’s a fun lot, but it’s also unclear what exactly they are there to do.

How Killer Camp chooses the murder victim, and the bottom two

The eliminated contestants murders are narrated by the show’s host, comedian Bobby Mair, who’s in full camp counselor mode, with a headband and a stopwatch and a whistle. While the cast is gathered around the campfire, two contestants are sent away, and then Bobby tells us a story about what happened to the one who dies and thus doesn’t return to the competition.

This is where camp counselor Bobby is the best, working himself up into a frenzy as he tells an overwrought version of the killing, which we also see in cutaways edited together with the contestants’ horrified reactions. It’s hilarious and riotously dumb.

The murders appear in letterbox with a blue tint, so it’s a bit more cinematic, though no one is going to be mistaking this for American Horror Story or Friday the 13th, because they definitely lean more toward Mystery Science Theatre fodder in their cheesiness. (The fact that a non-actor contestant participates in their own death scene looks fun but contributes to its lack of believability.)

Mair is a constant presence, introducing challenges by screaming into a microphone that supposedly broadcasts over a camp loudspeaker, and then hosting them. Until the campfire murder story, his performance was really grating on me, though it fits in really nicely with what’s fast becoming a trend: comedian hosts who shout every word in monotone as if they were Big Brother houseguests in the Diary Room.

For what it is, Killer Camp holds together surprisingly well—until the eliminations. That’s because the show never explains how the bottom two are chosen, nor does it explain why one person is murdered.

The contestants aren’t taking a test about the identity of the killer, like The Mole and Whodunnit contestants did. Also, the first two people out on the immunity challenge are not the bottom two. The contestants don’t vote someone out; Bobby doesn’t choose which campers have been bad that week and send them into the woods.

So how are the bottom two decided? Who decides which contestant to kill off and eliminate from the competition? And why the heck doesn’t the show tell us this?

I asked The CW, and got the rather interesting and reasonable response from the show’s producers:

“The bottom two are determined like this—one of the two is the person the killer has chosen to remove from camp that evening. The other person was chosen by the producers to be the most dramatic person that could be chosen. In [the case of one of the first two] was considered by some in camp to be acting guiltily so putting [that person] in the bottom 2 felt like it might encourage debate. The person eliminated is always decided by the ‘killer’.”

In other words, the contestant chosen to be the murderer—who’s benefitting financially from the cast’s incompetence at the challenges—picks one person, and the producers decide the other member of the bottom two based on who will make the best television.

I love and appreciate that honesty, and it makes sense. I wish the show would acknowledge the game element somehow, because it lost me in that moment as I tried to figure out if I’d missed something. We could have heard from the killer, voice disguised, explaining why they chose to get rid of that contestant, in the same way that Big Brother heads of household have to explain why they nominated someone for eviction.

As to the clues contestants are given, I asked about that, too. Here’s the response from the producers, via The CW:

“The clues do not directly affect eliminations but they do influence them. The contestant clues are always genuine facts about the killer. The contestant then decides whether to tell their fellow campmates the real clue or a fabricated one. If the killer wins a clue they might be more likely to fabricate it to throw fellow campers off their scent/put the heat on someone else.”

What I’m still unclear about is whether there’s a legitimate game to be played outside of the competitions. Can the camper contestants use the clues in meaningful ways? If someone identifies the killer, how do they prevent being chosen by them?

I’d like more of an umbrella game, and for Killer Camp to actually explain what is happening and why. But even without that, this silly summer show offers three competitions and a comically gruesome murder, and that’s enough to create a solidly entertaining hour.