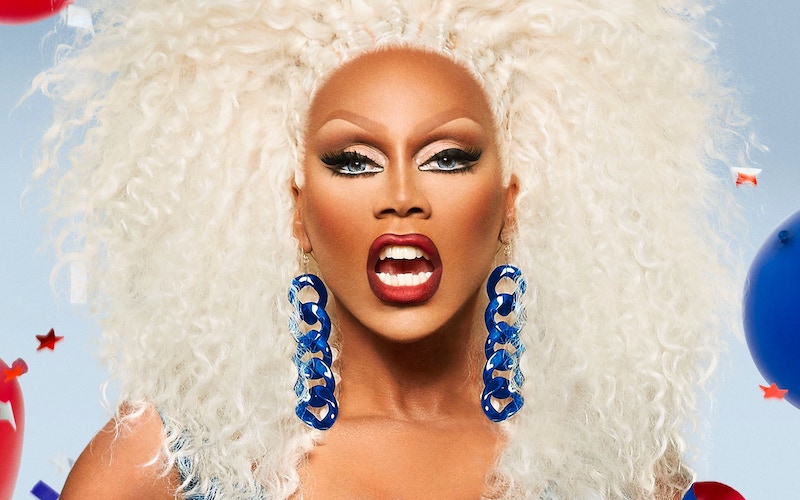 RuPaul in a promo for Drag Race, which will be followed by Drag Race All Stars 5 on Showtime (Photo by VH1)

The reality TV nominees were less painful. Sure, once again, given dozens of options, the Television Academy stuck with many of the same shows and people. But there were several new shows nominated—Love is Blind, Cheer, We’re Here, Tiger King, to name a few—plus a shake-up in the reality host category.

RuPaul’s Drag Race was nominated for 10 awards, tied as the 11th most-nominated show (with The Handmaid’s Tale and Mrs. America). The franchise had three more nominations for its related shows, Untucked (2) and Out Of The Closet (1).

In the reality host category, only two of last year’s nominees are the same: RuPaul and Making It co-hosts Amy Poehler and Nick Offerman. The others are all new—and all teams: the hosts of Queer Eye, Shark Tank, and Top Chef, plus Nicole Byer.

I don’t quite understand how Shark Tank’s stars are “hosts,” except that they ask questions, including ones producers prompt them to ask through their earpieces.

In the reality competition category, there was one major addition, The Masked Singer, while American Ninja Warrior and The Amazing Race, both nominated last year, were not nominated this year. (TAR could not have been, as it did not air a new season last year.) So yes, 60 shows were eligible, and the Television Academy members picked the same ones, again, except for a buzzy and popular new network competition.

Here are the nominees in seven major unscripted TV categories, but for all nominees, including technical awards—for example, Survivor: Winners at War was nominated in cinematography and editing categories—see the full list of nominees [PDF].