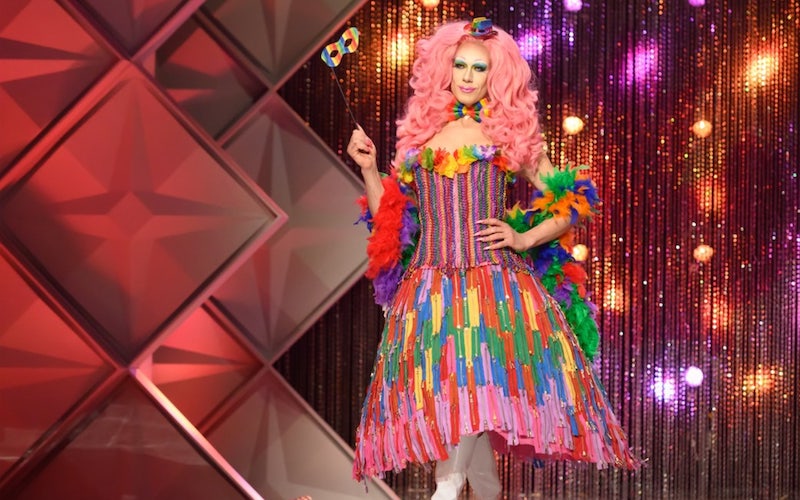 Canada’s Drag Race premiered earlier this month in Canada and aired its first two episodes on Logo last night. I’ve only seen an episode and a half so far, but I’m already completely in.

While Drag Race UK was just more fun than recent seasons of the US version have been, Canada’s Drag Race feels similar—but also refreshed and cared for, not neglected and taken advantage of, like VH1’s version, and that’s in no small part to minor but key tweaks to the production that make it feel like it belongs in this decade.

When Viacom shifted Drag Race from Logo (a small, niche cable network) to VH1 (a more mainstream cable channel), I imagined that might have come with a bigger budget. But it has largely remained unchanged, at least from a viewer’s perspective.

Canada’s Drag Race has a workroom that is wider, brighter, and with a glittery red maple leaf surrounding the door at its center, and that’s just one way that Canadian culture and references are charmingly woven in to the fabric of the show, all the way down to the modification of some familiar lines (“Just between us squirrel-friends” becomes “just between us cari-boo-boos”).

It’s the main stage that’s gotten the biggest and most impressive makeover. While it has the same patterned tiles as a backdrop (they were originally ceiling tiles), here they’re just turned 45 degrees and arranged in in layers, and lit much more dramatically, giving the stage more dimension and life.

The colors are more vibrant and varied, and even the judge’s desk has personality, instead of just feeling flat. The backdrop is more interesting— though I still find its color combination to be far too bright for my eyes, but that’s probably because I’m 100 years old.

Even the lower thirds—the on-screen text that identifies the queen—look more expensive on Canada’s Drag Race. The interviews with the queens are shot with a much wider angle, and with more white space, and that alone is a change that is as dramatic as a shift from SD to HD.

I’m not yet ready to make an assessment of the judges—Brooke Lynn Hytes, Stacey McKenzie, and Jeffrey Bowyer-Chapman—and their chemistry or their actual judging, in part because it’s hard to get used to an entirely new panel, and also a new format.

Instead of one judge making the decisions all alone (cough cough), the three judges make decisions together. I’m not sure yet about their chemistry or their decision-making, sending Kyne to safety even as her dress dropped balls all over the stage.

The most jarring change is that the episode’s guest judge—in episode one, it’s Elisha Cuthbert—takes over RuPaul’s role of introducing the main stage challenge, walking down the runway, and introducing the panel. I’m just so used to seeing RuPaul do that episode after episode that it felt like watching a stand-in do it for camera blocking.

While the judges shared different parts of the process, the guest judge, Cuthbert, was given the “the time has come for you to lip sync for your life,” and even the “good luck and don’t fuck it up” lines.

Giving that central role to someone who just shows up for one episode is magnanimous, and also reinforces the idea that there is no one single person with power on Canada’s Drag Race, which does not have a person’s name in its title. Yet having the guest judge be the only person at the judge’s table not helping to make decisions is weird.

So much of the show is beat-for-beat the American version, from the music cues to the way the judges read off a cue card or teleprompter while introducing the challenge and are clearly not actually looking at the contestants.

Speaking of the queens! The cast is delightful so far, even the ones who seem like they may be a few episodes away from being exhausting in a Silky Nutmeg Ganache way.

What was most remarkable is how much dimension the first episode managed to give many of the queens.

Ilona Verley is immediately and ridiculously shady, accusing the one other queen in the workroom of buying Instagram followers, but is also concerned about representation of First Nations people and as the franchise’s first two-spirit contestant.

JimBo is immediately and hilariously goofy, though not yet revealed to be much more than that, so there’s room for growth.

The episode-one’s edit was also a little lopsided in that it did point strongly at Juice Boxx’s exit, because she was given the most time to fill in back story, never mind her runway panic attack. But overall, it didn’t feel like first episode of competition shows that ignore some people.

After its linear TV premiere in the United States, I’m ready to see more, and already appreciating all the ways in which Canada’s Drag Race has tweaked and modernized a show that premiered in 2009, and realizing all the ways in which VH1 and/or World of Wonder failed to refresh their franchise, and has noticeably dropped their balls all over the stage.