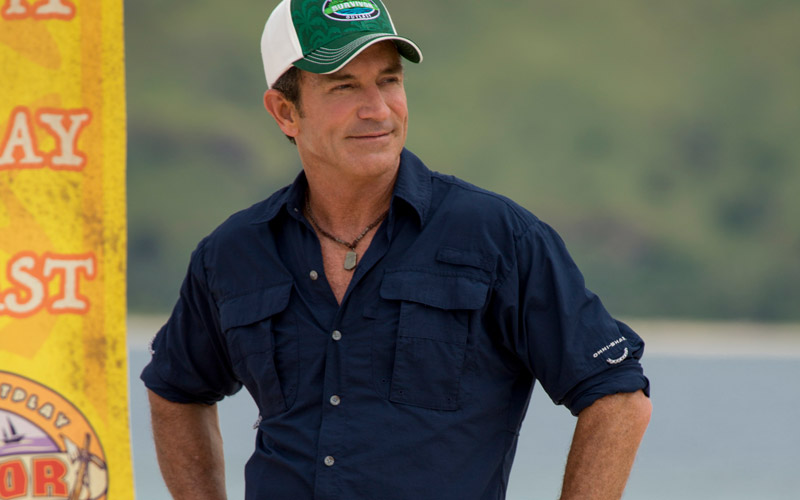 Jeff Probst at the start of Survivor season 35 in Fiji, the same location that will host Survivor 36, aka Survivor Ghost Island. (Photo by Robert Voets/CBS)

Black Survivor alumni have been promised a meeting with CBS and production over the show’s racism, which the players detailed in several different forums recently.

That’s a significant change from a year ago, when CBS executives were content to gaslight viewers and Black Survivor contestants, insisting that Survivor (and Big Brother) alum were mostly “very happy”—even though there was clear, recent evidence that wasn’t true, such as Julia Carter’s essay.

During Morning Edition yesterday, NPR TV critic Eric Deggans reported on recent efforts by Black Survivor contestants to discuss their experiences with racism. No one from Survivor or CBS would talk to Deggans on the record, but the network did release this statement:

“CBS condemns racism in all its forms and we are committed to inclusive and safe production environments. In the spirit of partnership with former contestants, we have responded to the request from the Black Survivor Alliance to meet with representatives from the show and CBS, and we’re working together to set a time for this discussion.”

Once you wade through the bullshit—CBS has been encouraging racism in all its forms by remaining committed to casting and hiring racists and doing next to nothing about racist behavior—there’s a considerable change from the gaslighting CBS was doing last year.

Last August, CBS Entertainment President Kelly Kahl told me “the vast majority of people who come off the shows are very happy with way that they’re represented.” That was after I asked him about Survivor’s problems with representation and racism at TCA. He also said, “I think most participants on these shows come off and come away having a very, very good experience.” (Read the whole transcript here.)

But what is absolutely clear is a lot of participants on CBS’s shows come away having had a very bad experience, and one that didn’t have to be that way.

J’Tia Hart—who is part of The Soul Survivors Organization, which created a list of actionable changes the show can make, and hosted a conversation with Black Survivor alum last week—told NPR this:

“What they don’t do a great job with, is telling positive stories and connecting with the multifacets of being African American. I have a degree in nuclear engineering from a top engineering school. I’m a mother. I work in national security. I am very well-rounded. And I just got boiled down to a simple trope of a lazy, unintelligent person.”

In the roundtable that aired on Rob Cesternino’s RHAP podcast, Jolanda Jones, who was on Survivor Palau, said that racism began during casting, and came from current showrunner Jeff Probst and executive producer Mark Burnett.

Jolanda said, according to The AV Club’s transcript,

Jeff and Mark [Burnett, who serves as an executive producer,] both asked racial, racist questions. The one that sticks out to me the most, this was before casting, “So TV usually portrays Black women as angry Black women. How would you feel if we portrayed you as an angry Black woman?” I should have known what they were going to do, right? I should have known, because they told me what they were going to do. But I was naive. Survivor has a plan and… we have literally been caricatured.

Jolanda was voted off third and said that, at Ponderosa, before the pre-jury contestants were sent away on a trip together, that she was called a racial slur by another cast member:

“…I was called the N-word and I literally had to pick up a pool cue and pool ball to defend myself against two white young men in their early 20s because they were going to fight me. I was a 39-year-old Black woman… Normally you travel together, but they split us up and sent us to two separate places because of the racial issues.”

On an Instagram Live with Michelle Fitzgerald in early June, Survivor Ghost Island winner Wendell Holland talked about the need for the show to hire Black producers.

Listen to the NPR story, and to hear more what Survivor was like for many of its contestants, from those contestants, listen to and/or watch the podcast episodes and roundtable discussion.