Skip to Content
Big Brother starts as summer fun, but nearly ends up as a lot of garbage and toxicity. (Photo by Brian Yurasits/Unsplash)

Big Brother premiered 20 years ago tonight on CBS. Since that first season, it’s changed the format of its game; moved into a new, permanent house; and aired a streaming-only season plus two celebrity editions.

While it’s absolutely delivered some entertaining moments during its two decades on the air, and has hosted some strong players and decent people, there’s also no question that the show is mostly garbage, home to a deluge of racism, violence, and ugliness. That’s clear when you look back at its first two decades on the air.

The show that premiered on July 5, 2000, was very different from what we know now. It started its American life much closer to its international predecessors. Ian O’Malley was Julie Chen’s co-host, and episodes aired six nights per week. The house was some trailers in a parking lot, and the game allowed viewers to vote out contestants, so all of the interesting people went first. That assclown Dr. Drew—who recently spread dangerous misinformation and then tried to stop people from seeing it—showed up to provide analysis.

That first season was new and different, but it wasn’t great television in the way that Survivor: Borneo absolutely was. That was in part because Big Brother’s game gave viewers power, and they voted out the most interesting players right away. While it was mostly boring, it did have its moments, especially when viewers started communicating with the cast by hiring planes to fly over the studio trailing banners. One said: “Big Brother is worse than you think. Get out now.”

After season one, the show restructured its game. Instead of turning toward viewer interactivity and making that better, it leaned more heavily on twists and the heavy hand of its new producers.

That new format worked, creating wild shifts in power and drama. Season two gave us the alliance Chilltown and Dr. Will, a great strategist/villain—and also resulted in an expulsion after one houseguest held a knife to another’s throat and asked her, “Would you get mad if I killed you?” From the very beginning, the rot was there.

The production has consistently cast people who act in abhorrent ways, and the format has frequently resulted in winners who’ve done and said horrible things. It seems to reward bad behavior. Some houseguests have faced consequences outside the game, like being fired from their jobs. (Remember the winner who was sent to federal prison for being involved in a drug ring?) Others have been rewarded, by CBS and others.

Big Brother’s branding is all about pretending that it’s a light, fun summer show, but the pristine, glimmering blue water of the backyard swimming pool is actually no different than that blue liquid at the bottom of port-a-potties, ready to receive a firehose of shit, which then gets fed to rabid, often toxic fans. The house has been home to sexual harassment, physical violence, and abusive behavior that is tolerated, especially when the producers love the contestant and want to play up their storyline.

Sure, you can run your hands through the chunky raw sewage and find some treasures—hilarious, charming moments like this one—and it can be absolutely addictive to watch, especially online. I watched the live feeds during season two, and was fully absorbed.

But does Big Brother contribute anything meaningful to the world except money for CBS, which steadfastly refuses to do anything to make the show better?

The show now airs three episodes a week, and its production turns those around in just days, which is impressive except it’s also so formulaic now the contestants know exactly when to expect everything. It’s a shoddily produced competition with consistently bad and unfair game design, especially the sorry excuses for twists that are usually dropped after a few weeks.

It’s kept my interest because I’ve always hoped it could be fixed and realize its full potential as a social game in a confined environment, with audience members able to play a role.

As a reality TV fan and critic who likes to learn about how TV is made, I appreciate the way it makes its raw footage available via the live feeds, which is captivating for feed-watchers and reveals so much about how reality TV is produced, like last summer when a producer asked a black woman to act in more stereotypical ways during confessional interviews.

But even the best season, which for me was BB6, devolved into “raving lunatic racist” comments, which is something we just expect from the show now. Ugh.

To mark the 20th anniversary of this shitshow’s arrival on CBS, here are 20 pieces from the reality blurred archives, including behind-the-scenes stories, recaps of some of its ugliest moments, interviews with some of its winners and its producers, and stories about what keeps people watching. 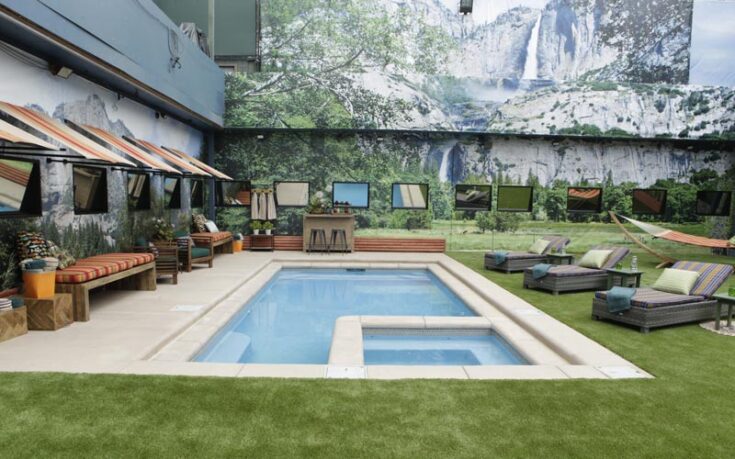 Behind the scenes of the Big Brother house

Along with other TV critics, I went behind the scenes of the Big Brother house, and shared every single detail in this two-part story, which explores everything from the control room to the back yard, the HOH's bedroom and bathroom to the nauseating smell in the kitchen. 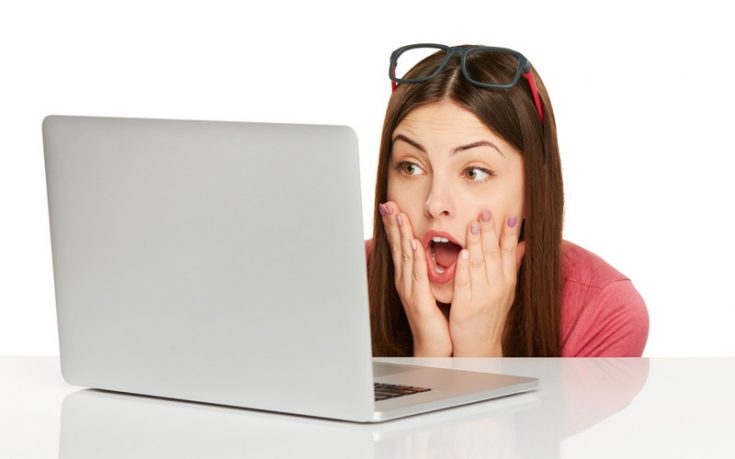 Why do people pay to watch Big Brother’s live feeds 24/7 on the Internet? What's so compelling about watching people sit around, eat chips, and sometimes get into drunken fights?

In this essay, the amazing feedwatcher known as Hamsterwatch—who's the best at tracking the show in real time while it's airing and streaming live to the Internet—wrote about the attraction.

In 2011, I published the contract that Big Brother houseguests sign and agree to before going on the show.

Besides detailing rules (that are regularly broken by the cast), the Big Brother contract also reveals how much the houseguests get paid, that they're tested for STDs before going into the house, and more.

I interviewed a person who went through Big Brother finals casting, staying at a hotel with all the other finalists and going through everything from testing to interviews with producers.

Here's exactly what happens—including the documents that potential houseguests receive during the casting process. 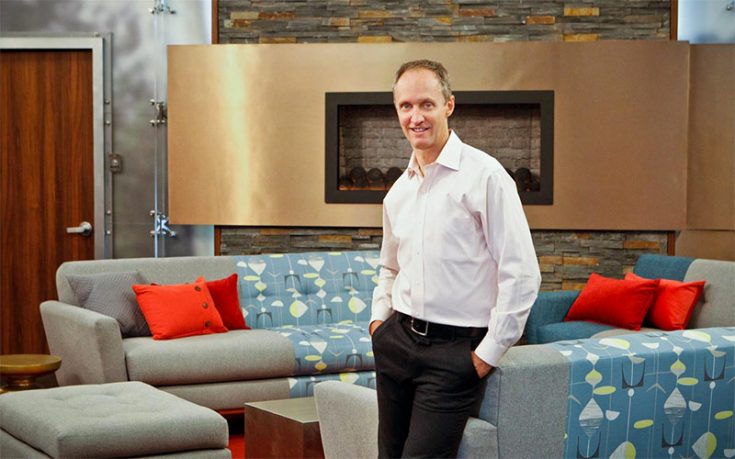 How Big Brother's set is designed

The Big Brother house is always at its best when it's empty of contestants, and the season is full of possibility that will soon be destroyed by the producers' unbelievably dumb twists.

But I digress: The man responsible for the house's design and construction, Scott Storey, is absolutely wonderful and charming. (He also designed Drag Race's set, among many other reality TV sets.) 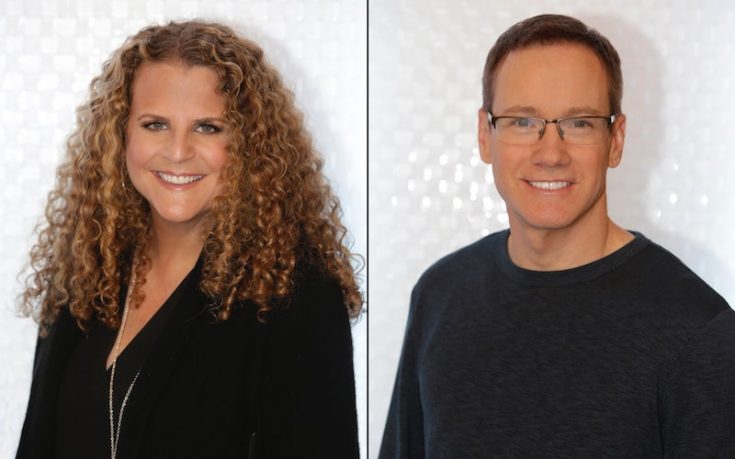 In a wide-ranging interview, I asked Big Brother's producers about everything from why they sometimes cut the live feeds to manipulating the game so their favorites can win.

Big Brother 15 may still hold the record for the most immediate and grotesque amount of racism, sexism, and homophobia—it started before the third episode even aired.

It was so bad that even CBS could not ignore it, but they addressed it in the most unethical way possible: by pretending it was all one contestant. 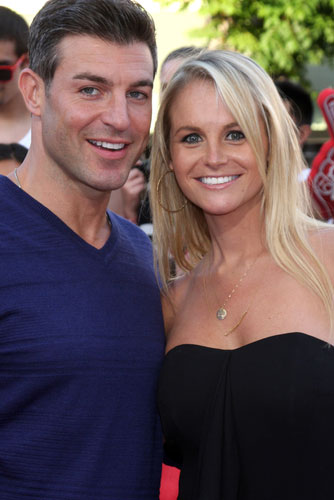 What CBS does when the houseguests say or do awful things

For several years, CBS kept sending out the same statement every time its cast members would say something awful.

After Jeff Schroeder—who CBS rehired year after year, as a contestant and then as an interviewer—went on a homophobic rant during BB13, I went on a rant about CBS's bullshit statements, and why they're so meaningless. 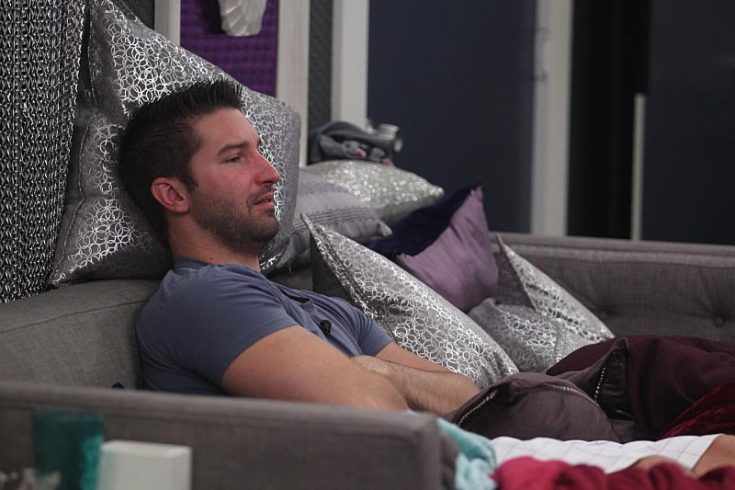 Big Brother's editors not only edit out bigotry and racism, but they've even deleted people from scenes, manipulating footage to make sure there's no trace of a person—like in this scene from BB17. 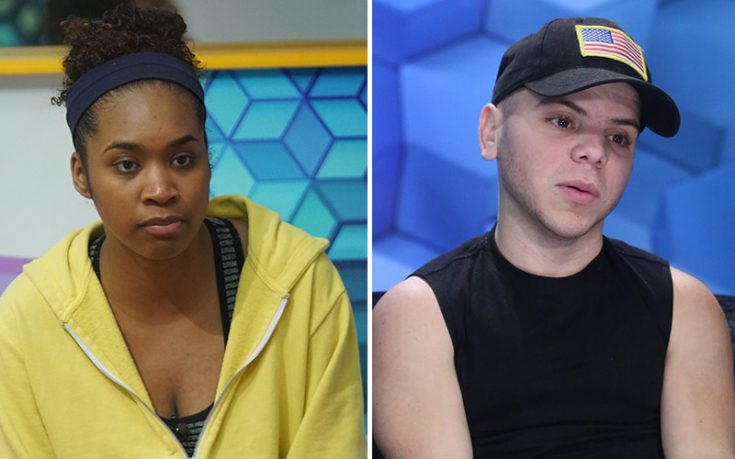 Big Brother broadcasts a conversation about racial and other slurs

During BB20, a man repeatedly touched, and attempted to touch, other people’s genitalia without consent and despite their protests; two players casually used racist language to describe their suntans; and another player casually using the n-word.

The show aired none of that, and did not hold its players accountable for their behavior. But it did broadcast a conversation about slurs—a conversation that included a white player using the n-word. 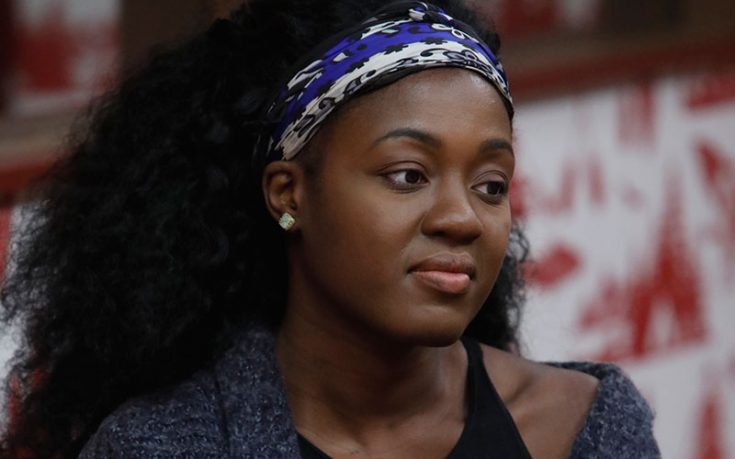 If anything, the racism on Big Brother has gotten worse, and last season, that extended to the show's production staff, which edited episodes to conceal the way a white male player was making violent threats about a Black female player. 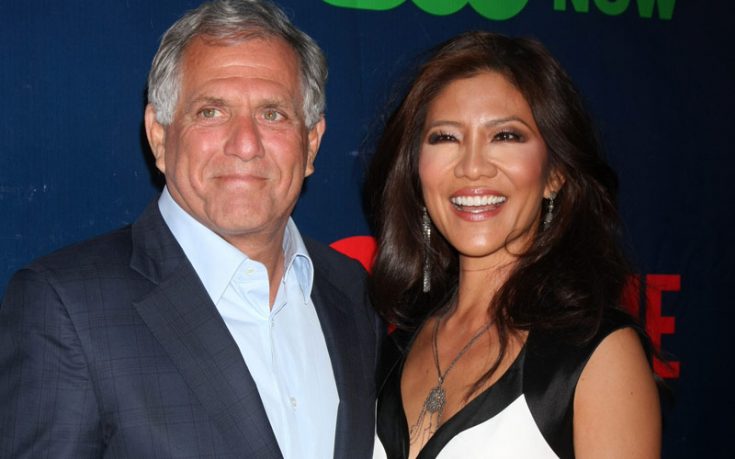 Before CBS CEO Les Moonves was forced to resign—women came forward and said he'd harassed, assaulted, and retaliated against them—he defended the show that his wife, Julie Chen, hosts. 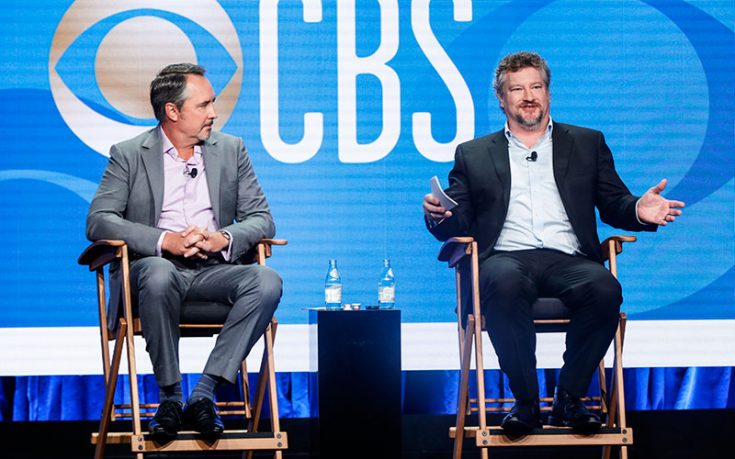 What do the people currently in charge thing of the show—and think about what happened on BB21? I asked them. 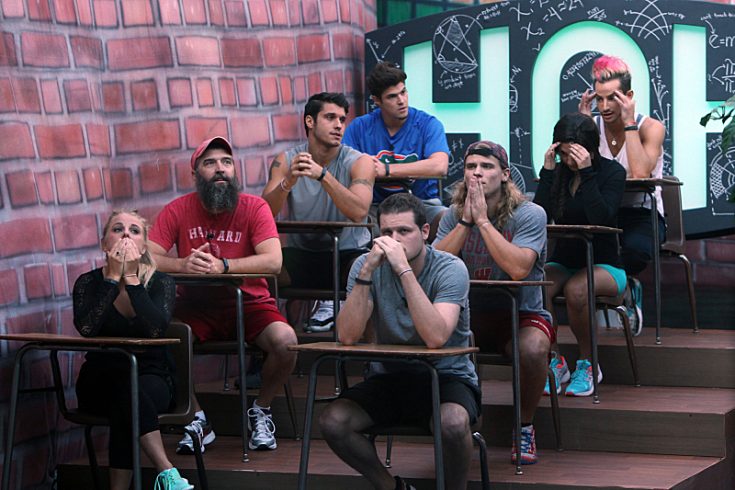 Will Big Brother ever get out of its rut?

In 2014, during BB16, I interviewed showrunners and executive producers Allison Grodner and Rich Meehan about whether the show would ever change. Here's what they said. 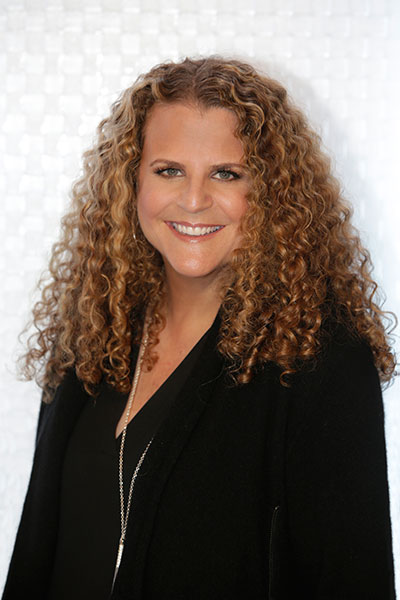 After TV critics toured the Big Brother house, we interviewed executive producer Allison Grodner, and asked her about everything from the live feeds to the format of the show—and also about why the TV show is edited to sanitize bigoted and racist comments. 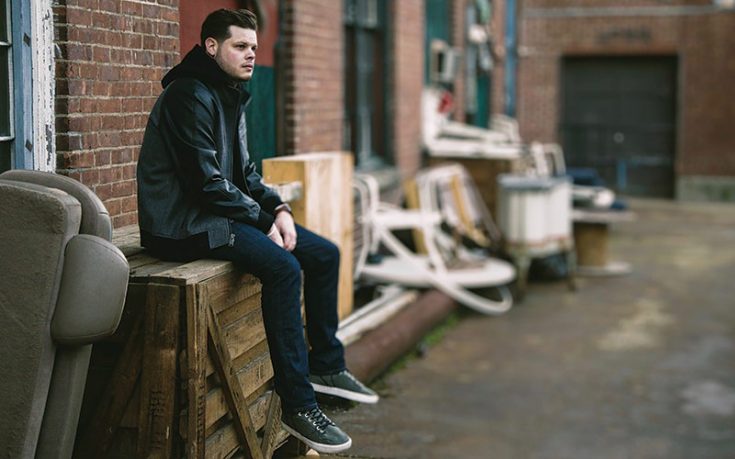 Big Brother 16 winner Derrick Levasseur’s “could write whatever I want” about his time on the show, he told me.

But what he chose to write about really surprised me. 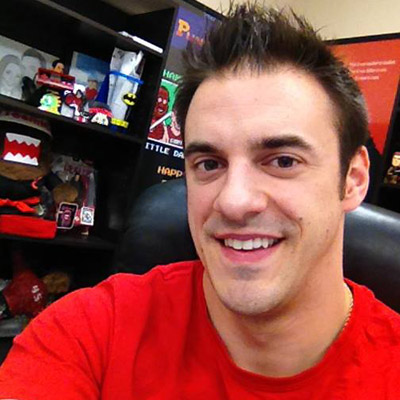 BB10 winner Dan Gheesling wrote a book titled How to Get On Reality TV in order to help “a lot of people on the fringe, quote-unquote normal people" who might want to apply for Big Brother. 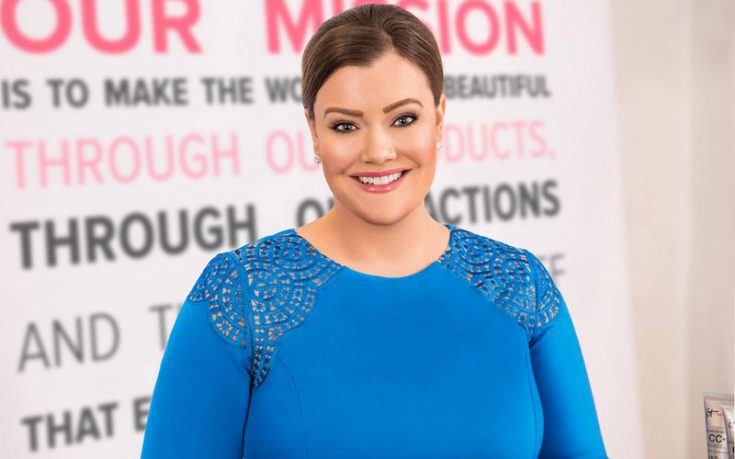 A Big Brother houseguest sold her company for $1.2 billion

Big Brother hasn't usually led to immediate fame or fortune for its players, but there have been success stories.

Jamie Kern Lima, the founder of IT Cosmetics and the fourth-place contestant on season one of CBS’ Big Brother, started a business after quitting her job—and then sold that business for $1.2 billion. 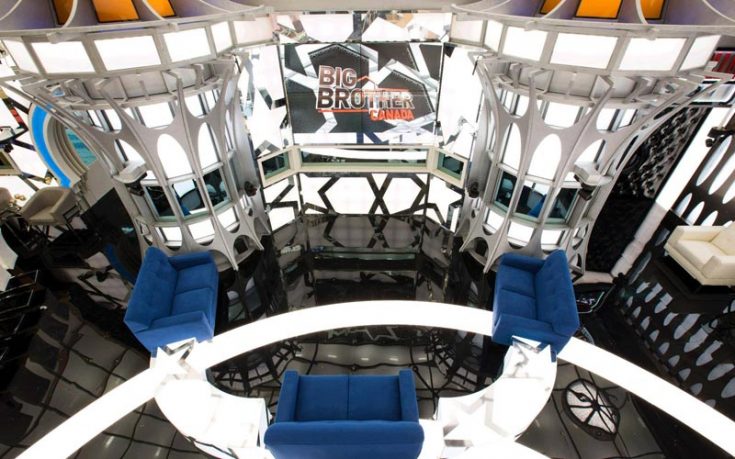 The differences between Big Brother Canada and USA

Years after Big Brother began in the U.S., Canada launched its own version of the show—and immediately made American fans jealous because it did such a better job with everything, including its challenges.

It certainly wasn't always perfect, but here, Hamsterwatch wrote about why BBCAN was so much better than BBUS. 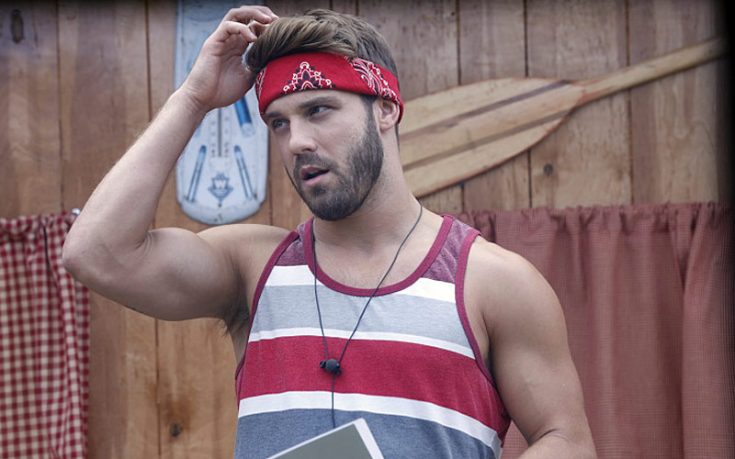 The reality of Big Brother: it will stay toxic until we stop watching