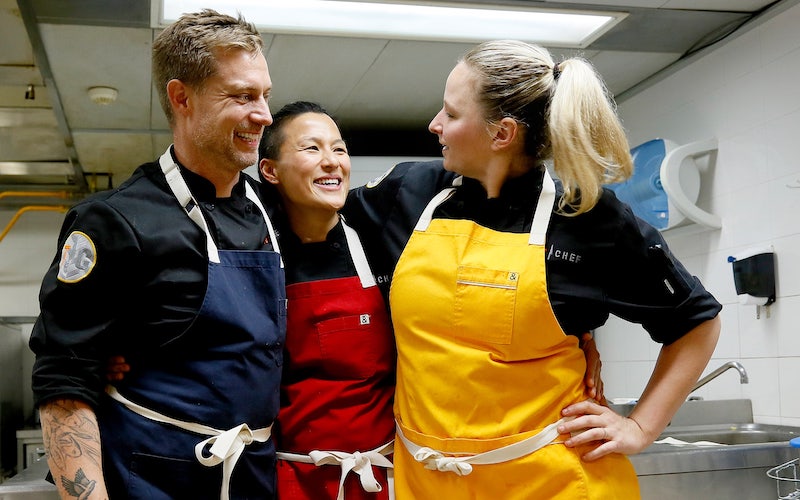 Bryan Voltaggio, Melissa King, and Stephanie Cmar during the finale of Top Chef All Stars LA. (Photo by Ernesto Ruscio/Bravo)

Top Chef All Stars LA began with a flimsy team challenge but found its way, and ends as one of the best seasons of the Bravo show ever. Besides giving us a solid group of chefs and an array of challenges that pushed them, the season perfected the show’s signature challenge, Restaurant Wars; had one of reality TV’s best family visit episodes; fueled Top Chef’s best spin-off show; and came to a close with five chefs who’d all be deserving winners.

The season has been thoroughly entertaining, though it also feels like it’s 10 years old, with its parade of before-times sponsors and challenges, from the Olympics to airlines, summer camp to Italy. It’s like a time capsule from another universe.

All the other familiar parts of Top Chef were elevated versions of themselves. Last Chance Kitchen was back, Edge of Extinction style: a return in the middle, and a return late in the competition (thought not as late as Survivor, and with no advantages for the returning chef).

It was quite a playful environment this season, and the production has really found a lot of fun in challenges are themed around the most-recently-eliminated chef’s failure. There was also a gauntlet for Kevin to get through at the end, making him earn his return. (I’d still rather see Last Chance Kitchen judged blind.) It brought back Karen and then Kevin, both of whom lasted for a few episodes and then exited again.

Whoever of the final three—Melissa King, Stephanie Cmar, or Bryan Voltaggio—wins tonight will be a deserving winner, though I’m rooting for Melissa or Stephanie. And my primary disappointment is that Gregory Gourdet was cut just before the penultimate episode.

Thankfully, Brian Malarkey, the reality show contestant with the most accurate last name in the history of the genre, was cut earlier, and though he bounced between jester and villain, he also managed to perform in the kitchen frequently enough to not just be a joke.

Most of the chefs have been bouncing around, between the top and bottom: just look at this chart illustrating the highs, lows, and wins, and how often chefs went from extreme to the other, week to week. That sort of unpredictability—especially among a group that knows their shit and knows the show—has made the season quite entertaining, and I think demonstrates how the challenges equalized the chefs by destabilizing them.

Melissa King has quite the wild ride: half of her six elimination challenge wins have been in the three most-recent episodes, but those were preceded by three episodes in a row of being on the bottom. Stephanie Cmar has had an even more volatile season, and is probably the underdog as a result.

Poor Bryan Voltaggio, who’s always been the Voltaggio I’ve rooted for, but seemed to deflate in the penultimate episode when Padma Lakshmi told him that the other guest chefs thought his food had no “heart and soul.”

Evan Funke was a great guest judge, both because of his knowledge of Italian cuisine and ingredients, and offered some of the sharpest and most animated and precise critiques of dishes we’ve seen all season.

By the way, Evan Funke is the star of Shape of Pasta, one of the best unscripted shows on Quibi, speaking of things that feel like they’re from a different century.

There’s no way the production could have known while filming last fall that the world would shatter as it has, but so many of the challenges took place in spaces that have been closed: the Getty Museum, an outdoor shopping mall, the L.A. Philharmonic.

Stephanie won tickets to the Olympics, which hopefully are transferrable to next year. The chefs served Mother’s Day-timed brunch to a group of moms, but buffet style. Watching Top Chef and other cooking shows usually makes me hungry; that episode just made me want to wash my hands.

But the trip to Italy was terrific, even if it was mildly triggering to watch everything from the airplane travel there to the chefs walking around food, like giant cheese wheels, without masks.

The challenges in Italy share something from one of my favorite episodes this season, the one that honored L.A. food critic Jonathan Gold: they celebrate food’s history and treat it reverently.

That kept Top Chef in its position as the premium cooking competition. It may make its contestants scramble for ingredients and compete under absurd time constraints, but it also consistently allowed the contestants to fold in their own ideas and techniques while still honoring their inspiration.