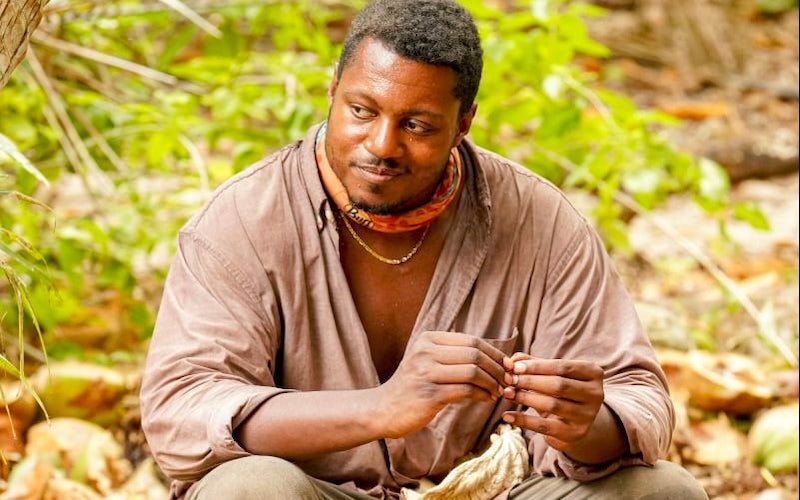 Jamal Shipman on Survivor: Island of the Idols (Photo by Robert Voets/CBS Entertainment)

The original season of The Real World will marathon all day long today on MTV, starting at 11 a.m. ET, and starting in the very first episode, race and living as a Black person in America becomes an ongoing theme. The season includes Kevin and Julie’s argument on the sidewalk in front of their New York City loft, which was not the only time Kevin tried to help his white roommates understand the differences in their experiences.

That episode aired 28 years ago this Tuesday, and it is abundantly clear that those who star in, produce, and watch reality TV still need to have those kinds of conversations—and that white people need to listen and act rather than be defensive or spiral into shame.

In this week’s collection of recommendations about things to read, watch, and listen to about reality TV, there are several of those conversations, including one taking place live tonight between several Black Survivor alumni.

There’s also a deep dive into a near-mutiny of the Survivor Heroes vs. Villains jury.

What producing reality TV is like for four Black producers

On last week’s episode of the podcast Reality of Reality, four Black producers who work in unscripted—Bree Frank, Toni Judkins, Sean Rankine, and Anthony Sylvester—discussed the problems with systemic racism in the industry with host Aliza Rosen.

That includes a lot of insight into how reality TV is made and how race factors in at all levels, not just in the obvious aspects, like casting and editing.

For example, Black producers are often called to work on shows that have Black cast members or “urban” themes, but not for other projects—while white producers don’t face the same kind of compartmentalization.

The producers also discuss everything the value of mentoring to the way executives make decisions based on perceptions of what audience members want. It’s a fantastic conversation.

listen to the episode

Survivor alum discuss how the show needs to change

There’s now a A Petition for Anti-Racism Action by Survivor Entertainment Group, which has concrete requests for both the production and fans who sign it.

Tonight at 6:30 p.m. ET, seven Black Survivor cast members will discuss “the casting of African-Americans, their portrayal, and recent racist incidents” on Survivor, plus “the way forward in handling race on America’s favorite reality competition show and how the public can help.”

It’s called Trials and Tribulations: A Conversation on the African-American Reality Television Experience, and will be broken up into two parts, which focus on “How does race factor into success on reality tv competition shows? And how are racist acts handled?” and “How should reality tv competition shows adapt in handling racism and their portrayal of people of color?”

The conversation will be moderated by Nicole Symmonds.

Last fall, the conversation Jamal Shipman and Jack Nichting and had on Survivor Island of the Idols about race was one of the highlights of a dismal season. It was two friends, talking, outside of the context of the game, honestly about unconscious bias and white privilege.

In addition to being part of tonight’s panel, Jamal recently appeared on Rob Cesternino’s podcast, as part of Rob’s new “Black Voices of Survivor” series, talking about everything from policing and systemic racism to Survivor.

The episode left me wanting an entire podcast, hosted by Jamal, in which he shares his insights and knowledge.

The second episode of Rob’s series featured Julia Carter and T’Tia Hart: Black Voices of Survivor: A Conversation with Julia Carter plus J’Tia Hart on the Survivor Anti-Racism Petition.

“Sean Rector had the idea for this special live event where all the African-American members of the Survivor community have been invited to talk about their experiences playing Survivor on and off the island. They will also be focusing on their life experiences as an African-American and will discuss ways to be better allies to the Black community given all the unrest going on in the world currently.”

There doesn’t seem to be a central archive of this new RHAP series, but they’re all included in the Survivor archive.

The story of Survivor’s Dragonz, and the jury’s near-mutiny

EW’s Dalton Ross did a ludicrously deep dive into a tiny piece of Survivor history: a band formed at Ponderosa by Coach and other Heroes vs. Villains cast members.

The most fascinating part for me was the literal mutiny that occurred at Tribal Council, when production agreed to let the jurors wear homemade band t-shirts, and then changed their mind, sending Coach into the jungle screaming “fuck this shit.”

And that was before the jury mutinied and threatened to not participate in Tribal Council. It’s a fascinating and weird story.