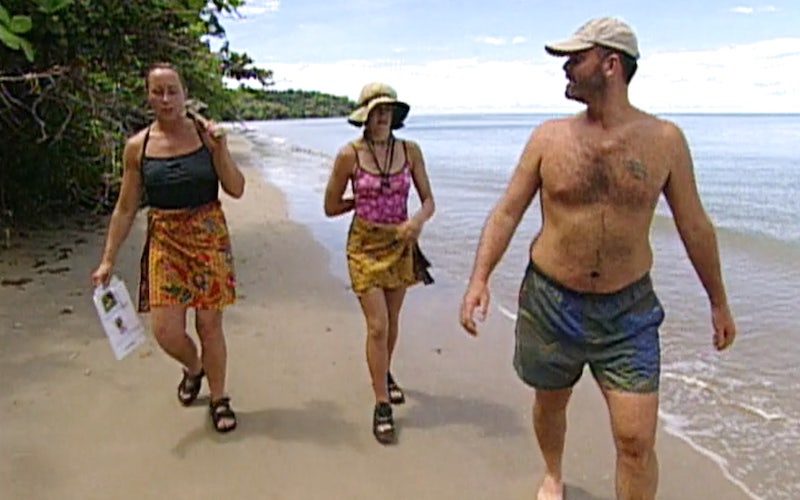 The title of Survivor Borneo episode four, “Too Little Too Late,” directly points at the outcome: Ramona’s exit. Her arc plays out on this episode, but this episode also introduces the season-long arc that will create some of the season’s biggest moments, and contribute directly to Richard Hatch’s win.

As the season progresses, we’re seeing more and more of an acknowledgement of the social game—even as the cast largely doesn’t seem to care about how they’re perceived by each other. During her exit confessional, Ramona identified a core part of Survivor: connections formed immediately. “I think the first two days that I was sick just really, really hurt me, because those first two days were crucial in forming relationships and stuff, and I really didn’t get a chance to do that because I was so sick,” she said.

Pagong finally decided to move their shelter from right next to the waves to somewhere smarter—which Gretchen has been pushing for—and at first Ramona wasn’t able to help. But she rallied and there’s a montage of her working on the shelter. “This is what 100 percent Ramona can offer to the team,” she said.

Meanwhile, Greg pretended to talk on the phone endlessly. Greg annoys me more than any else on this season presently, and that’s because he never feels like he’s not performing for the cameras. I can see why someone would think that makes good TV, and why he became a kind of breakout character even though he basically did nothing notable in terms of the game, but I’d so much rather watch people being authentic.

Over at Tagi, Sean worked on building a bowling alley instead of looking for tapioca, which pissed off Sue and gave me delight because I got to hear her say “tapioca” repeatedly.

The tribes didn’t get to leave their beaches for the reward challenge—though two of them, Jenna and Dirk, visited with Jeff Probst to learn about the challenge and see the very generous, Target-sponsored reward: a trunk full of supplies like hammocks, soap, towels, toilet paper, and pillows. Plus, each tribe got to request an item (Tagi: knife. Pagong: spices. This reward: explains everything.)

Their task was to create a signal that’d be visible to a plane flying overhead. I don’t know if the rule specifically asked them to create SOS signals, but if so, both tribes failed, I’d say. Pagong just created a smiley face in the sand, while Tagi wrote “Tagi is groggy.”

I really liked the way the reward had the tribe work together—or at least, introduced that as a possibility, because so many of the players seem unwilling to do that—and be creative. But the winner was chosen subjectively by Jeff Probst, the pilot, and an unseen survivalist (Mark Burnett?!), and I don’t like the idea of subjective challenges, though maybe it’s fine for a reward.

Tagi won because several of them laid in the sand, in the shape of an asterisk, wearing their bright yellow raincoats that’d they’d been wearing during the deluge a few nights before. Also: raincoats?!

The immunity challenge—a relay—was awesome. I suppose there’s versions of this now, with some tribe members handling the puzzle, but while they’re not always perfectly refined, these challenges were so creative.

I was so impressed by Rudy during the relay: he had to dig in the sand, which is absolutely exhausting, and dig an incredibly deep hole. Once he got to the treasure chest, he alone retrieved it and then ran it across the sand.

The Tagi Four—or was it three?

The first episode of Survivor Borneo has the first introduction of the idea of an alliance, as Stacey suggested the women were voting together. They ultimately did not, and it was also not even labeled as an alliance.

So it is here, in episode four, that the birth of the show’s first substantial, season-long alliance is born.

We were first shown Richard Hatch, in an interview, who said, “I think I’m going to handle this by beginning to develop alliances with some folks to ensure that I move onto the next round.”

Then Kelly said, in an on-the-fly interview, “The whole idea of an alliance is to make sure we’re all voting the same way.”

And while Kelly, Sue, and Richard are quickly having the first strategy talk of the season, bobbing in the ocean as they discuss who to vote off next, Richard acknowledges that this came about without him.

“So the alliances have begun and I didn’t even have to do much about it,” he said. Instead, Kelly told us she discussed with Sue about getting together with Richard.

We’re shown Kelly and Sue walking in the woods, connecting and forming their alliance. That moment explained Sue’s eventual rats and snakes speech, because Kelly is Sue’s original ally, and Kelly will eventually betray Sue. The events of the finale began here.

Sue told us that alliances will happen “because there’s money involved”—and it’s amazing more of the contestants haven’t been driven by that, or at least articulated it.

(I’m curious if the cast didn’t really focus on the game and strategy, of if they just weren’t talking about it. At Tribal Council, Jeff Probst tried again, pushing Pagong to talk about the game and strategy. He asked people who felt confident or vulnerable to say. Gervase volunteered that he felt confident he’d survive the vote—and then volunteered that he felt vulnerable thanks to his risky move of saying he was confident he’d survive the vote and make the final four. It was a really smart recovery on his part, and also an illustration of just how nervous everyone was about talking about the game they were all there to play.)

Rudy is the fourth member of the Tagi Four, of course, but he is actually not yet in the alliance. He said he was not wiling to “gang up against somebody … I’m not doing it; I don’t know about the rest of them.”

Is Rudy ever going to officially join? Or is it just his friendship with Rich that leads him to vote with Rich, and thus be aligned with the Rich-Kelly-Sue trio? I can’t remember, so I’ll be watching for that.