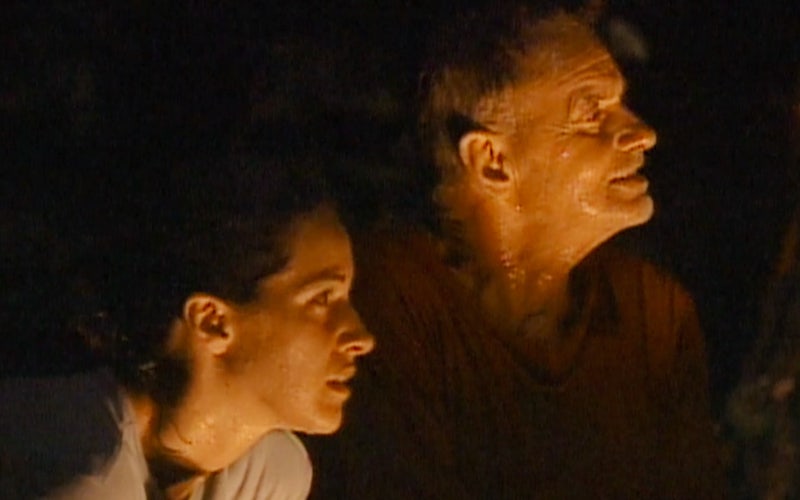 Survivor and its cast spend most of the time on actual survival this episode, gathering food, and there are two great challenges—both of which should come back. But this episode is most notable because the person voted out, Stacey Stillman, sued CBS and Survivor creator Mark Burnett.

The lawsuit, which was eventually settled out of court (i.e. Stacey didn’t drop the suit, and it wasn’t thrown out), alleged that Burnett convinced Sean and Dirk to vote for Stacey instead of Rudy, preventing the three oldest cast members from being voted off the island in three consecutive episodes, and also keeping a stronger character.

“Burnett improperly abused his relationships with the contestants and exerted unfair and unlawful pressure and persuasion on Been and Kenniff to cast specific votes, thereby rigging the contest,” the lawsuit said, according to a 2001 The San Francisco Chronicle story.

While episode two has Jeff Probst suggesting Ramona could be voted out, in addition to B.B., that episode itself focuses almost entirely on B.B. Episode three’s edit gave us two candidates, Rudy and Stacey, with a kind of showdown that started early in the episode.

Perhaps I spoke too soon in my recap of last episode when I suggested that Rudy was more self-aware and less annoying than B.B. That’s because Kelly said he’s irritating and “I think it’s influencing all of us,” and Rudy said that he expected the young ones to band together and vote him off the island.

Sue Hawk, however, insisted that she’ll vote for “the person that’s least contributing to the group,” who’d be “outta here.” Sue said, “that’s Stacey,” who “knows she’s the weakest.” And Stacey did know, or at least, inferred, because she read Sue’s refusal to talk strategy on the raft as an acknowledgement Sue was going to vote for her.

Ultimately, only two people voted for Rudy: Kelly and Stacey. That’s notable because if there were two more votes for Rudy, he would have been voted out, and that’s exactly what Stacey alleged: that Mark Burnett got Dr. Sean and Dirk to change their votes.

Dirk Been gets his first real screen time in this episode, reading his Bible out loud and then sharing his “testimony” with the others, which annoyed Sue Hawk. There’s a conversation about his virginity, and Kelly said, “I think he’s really sexually frustrated.”

Dirk told everyone if he can wait 23 years, they can go without for seven weeks, which is quite witty and may be the most personality he shows the entire season. Dirk also said that Richard Hatch’s sexuality “is really annoying to me” because Rich “talks about his homosexuality a lot,” but of course, it’s Dirk who’s obsessively talking about Rich’s sexuality.

Dirk’s use of the word “testimony” is rather appropriate, because it’s Dirk’s legal testimony, as part of a deposition in CBS’s lawsuit against Stacey, that would confirm that Burnett did indeed suggest voting Stacey off instead of Rudy.

In the deposition, Dirk said that before Tribal Council, “I was approached by Mark Burnett, producer of the show, and he came up to me and we had a very short and to the point conversation” in which Burnett said “the best thing that could be done for “you would to be to — to form an alliance against Stacey and vote Stacey off because Rudy is the — is the — is the guy that you will need in the future.” That also includes the letter he wrote to Burnett in which Dirk says, “I felt cheap and used.”

Still, when a lawyer asked him if he was “strong-armed,” “coerced,” “or manipulated,” Dirk said no. I’m not a lawyer, but could that be why this didn’t go to trial? Even if Burnett didn’t tell Dirk who to vote for, and Dirk had free will, that does not look like a fair game. It’s not a good look for Survivor.

For more in-depth reading about Stacey’s lawsuit, may I suggest:

In Dirk’s deposition, he testifies that Mark Burnett and executive producer Craig Piligian had regular off-camera conversations with the cast: “they would generally be smoking Cuban cigars and joking and laughing, and it was very chum-chum, how you guys doing,” Dirk said.

The episode provided clear evidence for this. After the reward challenge, in which Tagi won fishing gear, Colleen told the camera, “We heard a rumor that the other team caught a fish with their spear.”

Heard a rumor? From what, a new copy of Us Weekly in tree mail? She said that before the immunity challenge, so they wouldn’t have interacted with the other tribe. Clearly, that “rumor” came from a crew member, and if Burnett and Piligian were having casual daily chats with them, that could have been the source.

While Rudy versus Stacey did get attention, neither Survivor nor its players are really focused on the game play. Richard Hatch even suggested the first-ever pre-Tribal Council strategizing session, and “boy, did that not fly,” he told us.

Imagine, Survivor players who don’t want to talk about the game!

Then again, they didn’t even really have the language for it yet. As I wrote in my recap of episode two, I love how some of the language of the show hasn’t yet solidified: calling challenges “games” and tribes “teams.” Stacey called Tribal Council “the council,” while Probst called it “the Tribal Council.”

There is a moment when Kelly said “forming alliances,” which I think may have been the first use of the word “alliance.”

When they arrived at Tribal Council, Jeff Probst offered a conch shell (!) as a way to encourage them to talk.

Probst was so different in this episode, from his sunglasses at the reward challenge to the way he cuts off Tribal Council conversation because of a thunderstorm. “It’s raining too hard to put you guys through this any longer,” Probst said, and then offers to let them use Tribal as a camp: “You’re welcome to stay here tonight.” (I think this is the only season when the tribe had to actually hike to Tribal Council, versus being transported in vans or boats.)

Can you imagine modern-day Probst stopping conversation because of rain? No, he’d look up into the sky and scream, Yes! More! Punish them!

The episode is primarily focused on finding food—the actual survival part of Survivor. Over at Pagong, Greg fashioned an ingenious rat-choking device, and catches a rat, and throws in some of his Greg sass: “When cooking rats, I would imagine the sauce is of the utmost of importance.”

That led into a wonderful scene in which Ramona and Gervase tentatively tried cooked rat, culminating in a slow reveal that Gervase loved it: “We got to kill some more rats tonight,” he said.

The hunt for food also brought us “Operation Tapioca,” which led to Pagong’s discovery of the mud volcano and a mud-rubbing sequence set to some of the weirdest music I’ve ever heard on Survivor, and I still remember the Winners at War song (You better be ready / for this godforsaken song / to in-ter-rupt the ac-tion!).

There’s also Dr. Sean’s “Superpole 2000,” which proved to be completely ineffective at actually catching fish. What an incredible scene as Sean sat on the raft, catching nothing, as Rich popped up not one but three times having speared rays. Sean was quite a jerk about all this: “no more rays,” he said after ray number two. “We don’t know if they taste good.”

Later, after discovering that they did, in fact, taste good, Sean suggested catching more, and throws in this dick of a line: “They appear to be slow, slow, slo—or you’re good at catching them.” By the way, Sean appears to still be a practicing neurologist.

The episode made sure we know that Rich is providing food, and establishing a need for himself at camp. And that’s after Sue said she’s voting based on who contributes.

Rich’s spear was part of Tagi’s reward for winning Survivor’s first-ever reward challenge, which had the tribe swim out to a raft, and then dive down to drag a super-heavy chest in to the beach.

It’s a simple but highly effective challenge, requiring a lot of teamwork, especially since the chest seemed too heavy for any one person to move by themselves.

The immunity challenge had the tribes construct a stretcher at camp, and then use it to carry one tribe member through the jungle and then down the beach.

Survivor repeats challenges all the time now, and I think it needs to dip back into season one and bring both of the challenges from this episode back.

They’d be so easy to modernize: The immunity challenge could require the tribes to build the stretcher right then, during the challenge, and perhaps make it a little harder to find their tribemate, or give them obstacles to traverse on the beach.

Both challenges required teamwork, and while the contestants aren’t quite yet into the idea of tribes, Survivor is nudging them in that direction. “It is a team game,” Probst said during one of the challenges. “Big emphasis on the tribe.” Well, at least until idols and advantages show up.