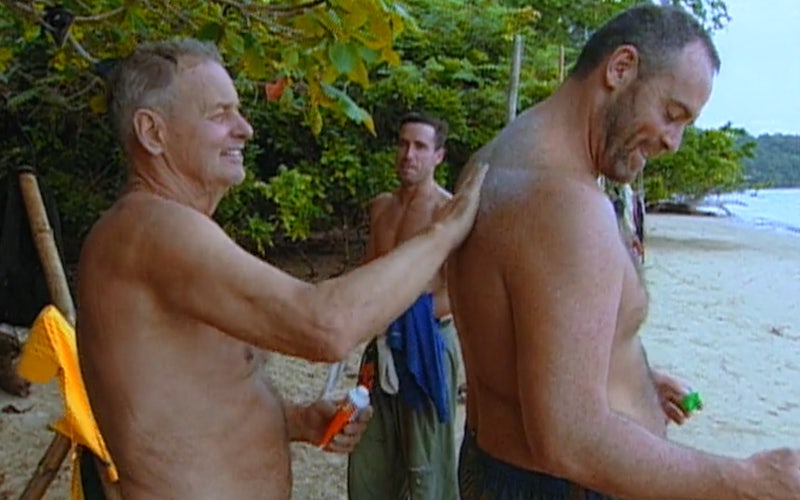 Voting someone out of Survivor is “unfair,” Jenna said at the series second-ever Tribal Council. “We’ve really bonded, so to kick one of us off is like losing a family member.”

There may be $1 million in fake money in front of them, but Survivor hasn’t yet become a game by episode two. And even though that “family member” who gets voted out, B.B. Andersen, was a toxic pain in almost everyone’s ass, it’s amazing that he is (very nearly) the first person to quit the show.

Episode two of Survivor Borneo is titled “The Generation Gap,” but we’re again reminded that there’s quite a difference between the two oldest tribe members: Rudy is stepping over that gap pretty effortlessly while B.B. tripped and fell headfirst into it and is flailing his legs around and kicking sand into everyone’s faces while demanding they stop blinking.

This is the episode in which Rudy Boesch breaks the fourth wall to tell the camera operator to capture him smearing sunscreen all over Richard Hatch’s back, and image we see immediately after Rudy delivers his iconic line: “Me and Richard got to be pretty good friends—not in the homosexual way, that’s for sure.”

By the way, there’s a fascinating but brief conversation at camp where Sean tries to argue against using the word “homosexual” (because it “has a history of being used to pathologize gays and lesbians“) and instead suggests “gay”: “You’re not homosexual, you’re gay,” he says. Rich doesn’t mind it, though. He also seems to acknowledge some of his privilege, or just his great luck: “I’ve never once in my life encountered prejudice.”

Then Sue tried to helpfully jump in with a far more offensive term: “it’s a lifestyle.” (Narrator: It’s not a lifestyle.)

All the while, Dirk just sat there, his knee bobbing up and down like crazy. I’m amazed he didn’t start ejaculating Bible verses until next week’s episode.

Anyway, it’s remarkable that Rudy so freely called Rich “queer”—which carries a clear tinge of negativity, as this seems to be long before the word was reclaimed by queer people and began to be used in positive contexts—yet also freely embraced Rich as not just a friend, but an ally whose game play he respects. He also just doesn’t care what people will think of this friendship.

Even Rich didn’t expect that, saying that “it would just freak him out” if Rudy found out Rich was gay. But it doesn’t freak Rudy out, and that’s what the takeaway is, even if his vocabulary is less than ideal.

“The homosexual, he’s one of the nicest guys I’ve ever met. He’s got leadership ability,” Rudy said, before establishing clearly that Rich is ahead of most everyone else in terms of thinking strategically: “If these people would listen…”

Meanwhile, B.B.’s voice is like a flame thrower, scorching everything and everyone who doesn’t live up to his standards or gets in his way.

Even when B.B. is nice, he’s an asshole. He carved chopsticks so everyone could eat their generous portions of rice, but demanded they keep them “so I don’t have to redo this again.”

Meanwhile, Rudy cooked rice with papaya, drizzled with a squeeze of lemon.

B.B. did understand how he’s being perceived: “I think they find me probably abrasive, authoritarian,” he said. Yet he is willing to do nothing to change that perception. He washed his shirt in the rice pot with fresh water and is insists he’d do it again, admittedly prioritizing his own comfort over his tribe.

“I’m not trying to win a personality contest,” B.B. said. Um, uh, yes you are! Did Mark Burnett forget to brief B.B.?

There’s so much B.B. behavior that it began to wear on me. This episode had just one challenge, and was a little slow. All of the B.B. behavior isn’t foreshadowing, it’s like 2x4ing to our temples.

What we did also get, though, was more time at camp and character development, especially at Pagong. Colleen and Greg’s friendship was introduced (Colleen: “It’s just good to have a friend.” Greg: “She’s really fun to play with.”), and Greg led the tribe in a rousing campfire game in which Joel uses “Good & Plenty” as a metaphor for his favorite sex position.

Survivor’s dictionary is a work in progress

In what will obviously be a recurring them this season, Survivor is figuring itself out: the players will figure out the game (well, some of them), the show will find ways to tell their stories, and even viewers are learning just what this new type of television program this is.

Jeff Probst was back to explain challenges and tree mail, and later the immunity idol, giving us a mid-episode recap. He even pops in for a pre-Tribal Council summary. He does his hosting mostly away from the contestants.

What stuck out to me most was the inconsistency in language. Stacey refers to her tribe’s visit to “Island Council,” but even Probst calls it “The Tribal Council.”

B.B. called the immunity challenge an “indemnity challenge,” which may have just been a slip of the tongue. More importantly, he suggested throwing it so they can lose, because he insists the name of the game is whittling down the tribe. He’s not wrong.

“I’m not going to quit,” he tells the camera, “but if I can engineer an escape route for myself…”

Technically, yes, he does not quit. He also does not throw the challenge.

If there was ever a challenge that a single person could throw, it was this one, the first eating challenge in network reality television history. The problematic nature of these challenges is right there, with Jeff Probst saying that butod, or beetle larvae, is like sushi.

Far more offensive is Gretchen, who tells Gervase, “If you’ve been to Chinese restaurants you’ve eaten worse than this.” What fucking restaurants does Gretchen go to?

The whole challenge is chaotic; Jeff Probst is a passive observer, and the contestants are really unruly and talking all at once. Most of Probst’s rules were given in a voice over, as was his countdown for Gervase to finally eat the grub.

The only rules of the challenge Probst gave are 1) “Put it on your plate and don’t let it crawl away,” and 2) If someone doesn’t eat their grub, their tribe loses immunity. But that is such a weird rule! Is it just the first person to refuse? What if two people on one tribe refuse and one person on the other tribe does?

There is a tie-breaker: each tribe selects one person from the other tribe to eat two grubs, and the fastest time wins. Gervase, to his credit, gets them both down, but not faster than Stacey.

While challenge losses were often an easy excuse to give to vote someone off in early Survivor, Gervase’s name never comes up, and no one suggests that it’s his fault they lost.

At this point, B.B. still seemed like the obvious vote, though there’s a second possibility: Ramona, because she’s been sick.

While B.B. previously identified Ramona as “really a drag” for doing things like eating and drinking water, that followed an extended sequence of Ramona being sick, and even throwing up.

I’m wary of reality TV’s stereotyping of black people as lazy, but by presenting the events in that order, and making sure viewers understood Ramona was ill, it seemed like Survivor (as a TV show) was not embracing that narrative. Ramona was clearly sick, and B.B. was clearly being a jerk for demanding that she work more while barfing.

Tribal Council was quick and almost free of suspense: Jeff Probst’s vote reading is practically lethargic, and he doesn’t verbalize an ongoing tally, and it’s only after he reads a vote for B.B. that he says the “last vote is irrelevant.”

It’s so anticlimactic, at least since Survivor has trained to expect more climax. It’s nice to just watch the tribes have fun, instead of scrambling for idols, but I also wouldn’t mind a little more tension and drama. Maybe next week.