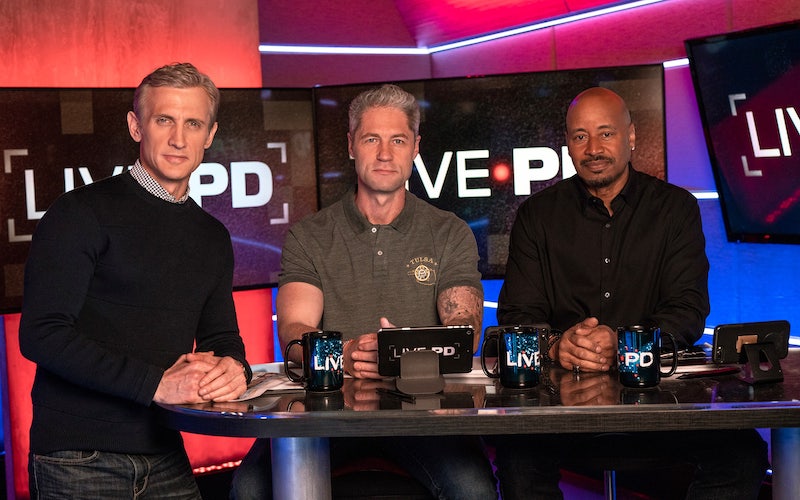 A&E will not air Live PD this weekend, including a planned special 300th episode on Saturday night. And Paramount Network has replaced the Cops season 33 premiere on its Monday-night schedule with Ghostbusters, though ViacomCBS’s PlutoTV is running it 24/7.

But while A&E says it’s not airing Live PD “out of respect,” Live PD is airing right now, as part of a day-long marathon of Live PD and Live PD: Police Patrol, a spin-off that’s more like Cops. And there are more reruns scheduled for tomorrow.

Earlier today, I tweeted that A&E’s “stand against racism” and promise to “stand united with our viewers, employees, partners and the entire black community” didn’t stop them from airing a marathon today of the show.

Live PD is a program that pretends to be objective but whose creator won’t even answer simple questions about how the show is produced.

For one example of how Last year, the hit A&E show was mentioned in a lawsuit by a black man who’d was arrested for drug trafficking on camera; the charges were later dropped for lack of actual evidence, but as the lawsuit said, A&E kept showing the arrest anyway: “The LivePD episode has aired nationally countless numbers of times since it originally aired. The airing of the episode continues to do irreparable harm to the Plaintiff as long as it continues to air.”

That’s one example of the way A&E is actively hurting people, and actively perpetuating stereotypes, via the show.

I reached out to an A&E PR vice president this morning to see if they still were planning to air the show this weekend, and did not receive an answer. But Variety did, reporting that “A&E has decided not to run new episodes of Live PD this Friday and Saturday” only.

“Out of respect for the families of George Floyd and others who have lost their lives, in consultation with the departments we follow, and in consideration for the safety of all involved, we have made the decision not to broadcast ‘Live PD’ this weekend.”

The “in consultation with the departments we follow” part is interesting, because the show works with police departments who give the show and its camera crews access. Were those departments the ones who pulled the plug first?

Also, note that A&E is only stopping this weekend. Live PD is their top-rated show, and there is zero indication they’re willing to cancel it.

When I wrote earlier this week about how reality TV is a big part of the problem of institutionalized racism, Cops was on Paramount’s schedule Monday night, but now it is not, which I tweeted about earlier today.

Paramount, which is owned by ViacomCBS, has removed the show’s pages from its website. However, Gracenote’s TV listings show repeats of Cops are scheduled to air on Paramount starting June 15. That may change of course, and repeats of Cops are airing tonight on WGN.

Schneider wrote that Paramount’s change may have come sooner than today: “Paramount Network hasn’t yet commented on the fate of Monday’s ‘Cops’ episode, but its program schedule no longer shows it airing as planned at 10 p.m. ET; ‘Ghostbusters’ is now scheduled there instead. Paramount made the shift over a week ago, as ‘Cops’ also didn’t air this past Monday in its normal spot. And Paramount appears to not have future plans for ‘Cops’ on the network.”

However, ViacomCBS’s ad-supported streaming service PlutoTV has a Cops channel that is still running the show 24/7.