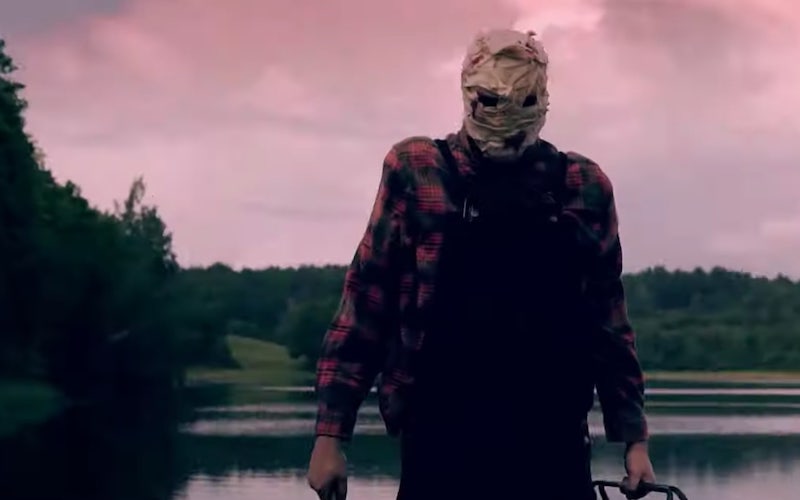 The mysterious killer in the trailer for The CW's Killer Camp, which aired on ITV2 last fall.

The CW is filling some of its summer schedule with four international reality shows that it has imported, and one of those is Killer Camp, a reality competition that aired on ITV last fall.

It’s a murder mystery reality show that looks and sounds similar to the ridiculously fun 2013 ABC reality show Whodunnit? On Killer Camp, the losing contestants are murdered—which you may recall prompted some ABC viewers to think that the show was actually killing people.

Below are details about Killer Camp, plus the other three reality shows that The CW says are part of its “quartet of alternative acquisitions” that have been added “to its summer line-up”: Fridge Wars, Being Reuben, and Taskmaster.

Fridge Wars is a Canadian series that premiered earlier this year on CBC. It’s hosted by the actor Emma Hunter, and will premiere Aug. 2.

The CW “top chefs compete to make an amazing feast using leftovers and ingredients found in your fridge,” and that is a literal description:

“Each episode, two top chefs are pitted against one another with a challenge to create extraordinary meals using only the ingredients taken from the fridges of ordinary families.

We learn why dinnertime is a source of stress and panic when host Emma Hunter visits a family’s home and conducts a surprise fridge raid— taking everything from last week’s leftover lasagna to the condiment collection, and even snatching that questionable bag of frozen vegetables from 2016.

The competition commences back at the FRIDGE WARS studio where the family’s fridge is recreated for both chefs. Once the clock starts, the chefs have 45 minutes to get dinner on the table — cooking with ingredients they’ve never seen for people they’ve never met!

Inside their fridges, the chefs scour through the ingredients imagining what they can possibly pull together. But it’s the outside of the fridge that holds clues that guide the chefs to create a winning meal strategy. The family calendar, take-out menus, photos and maybe a gluten-free recipe are all potential clues to influence what meal will be a hit with these total strangers.

When time’s up, the family takes their place at the dining room table and tastes each meal, scoring them on look, taste and originality — without knowing who cooked what.

Those results go in the FRIDGE WARS vault and we do it all again with a new family and a new fridge full of challenges, this time upping the ante with a “What the Fridge (WTF) Challenge” that forces both chefs to adapt to a totally unique culinary crisis. With both families’ scores tabulated, the final scene reveals which chef successfully created a mouth-watering masterpiece to win the “Fridge Wars”battle.

If you’ve seen the UK’s version of Little Big Shots, or spend a lot of time on Instagram or YouTube, you might know the star of Being Reuben, Reuben de Maid, who’s 14 and a beauty influencer. He appeared on the show when he was 12, singing and also talking about doing makeup—and being bullied.

His reality series premiered earlier this year on Quest Red, a UK channel owned by Discovery.

Here’s how The CW’s press release described the show, which premieres Aug. 7:

In this fun, inspiring and warm-hearted new docuseries, we follow Reuben as he grows into his glamorous new life, while still grounded in his reality at home in Wales with siblings Coco and Sonny, and his mother Vicky. Being Reuben takes a passionate look at how a loving family has given their special teen the strength to stand out.

Taskmaster is a U.K. game show that was actually adapted in the U.S., and aired one season on Comedy Central in 2017. It premiered on the network Dave, which is part of UKTV, and then moved to Channel 4 this year.

The CW describes the show as a:

The tasks – usually performed in isolation, but occasionally in teams – are designed to encourage the players to think laterally and creatively.

Judging by its trailer alone, Killer Camp looks like the perfect combination of a campy summer reality competition and Whodunnit, a hybrid series that had scripted and fictional elements (obviously; the show didn’t actually kill off its contestants).

And setting a horror-themed show at a summer camp is a perfect for its homage to a classic horror movie, Friday the 13th.

Killer Camp will premiere July 16 on The CW, airing Thursdays at 8.

The production company, Tuesday’s Child, which also produced the UK’s version of Lego Masters, calls the show “a horror themed whodunnit gameshow set in an 80’s American style summer camp where a group of adventurous contestants must play like their life depends on it. Because it does.”

The show is hosted by a comedian, Bobby Mair, and The CW described the show as a “satirical horror whodunit reality competition”:

11 British strangers are shocked to discover they are not going on a fun new reality show called “Summer Camp” but actually participating in an over-the-top “murder” mystery series called “Killer Camp.”

Camp Counselor Bobby will be the first to tell you that everything at Camp Pleasant is picturesque and perfect… except the minor problem of the brutal murders. In typical reality show fashion, there will be camaraderie, sex appeal, and lots of backstabbing… only this time, literally.

As the campers play games to earn cash during the day, each night one of them will meet their untimely demise in ever more extreme, hilarious and inventive ways. Nobody can be trusted, as one of the campers among them is actually the secret murderer controlling the evil camp handyman “Bruce,” who executes the bloody hilarious death scenes.

It’s up to the campers to determine who is pulling the strings, cast out the murderer and save themselves before it’s too late.

When ABC’s Whodunnit was airing, I interviewed one of its producers—the creator of CSI—about how the show was produced, if you’d like to get an idea about how exactly a reality show murders its players.