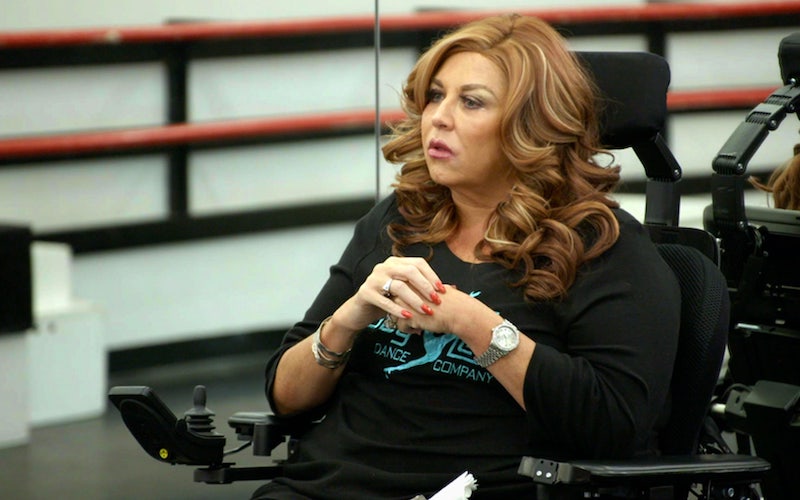 After Adriana Smith, whose 7-year-old daughter Kamryn Smith was featured on Dance Moms season 8, said star Abby Lee Miller made racist comments, and a producer who works on the show backed Smith up, saying she wished she’d left the show at the time.

“Today I am tired of being silent because of a contract. I am choosing to be the Voice of my Family and others and you can be the Voice for yours and your friends too!” Adriana wrote at the end of a series of Instagram posts.

Season eight of Dance Moms, which premiered one year ago today, was the first season in almost two years. During season seven, Abby left halfway through the season, and eventually pled guilty to bankruptcy fraud and went to prison. (She was replaced for a few episodes by choreographer Laurieann Gibson.) When the show returned last year, it was preceded by a special that, as Lifetime explained in a press release, offered “an inside look at Abby’s physical and emotional struggles while undergoing chemotherapy and learning to regain the use of her legs, all the while pushing forward to keep her dream of a new competitive dance team for the Abby Lee Dance Company alive.”

In her Instagram post Tuesday, Adriana Smith wrote, “I couldn’t think of a more perfect day to address my experience with Abby Lee Miller … Call me naive, I thought with cancer and jail time maybe she had changed just a little bit. Well [season eight] proved that was a complete lie.”

In a series of screenshot images posted to Instagram, Adriana wrote that Abby once told her, “I know you grew up in the HOOD with only a box of 8 crayons, but I grew up in the Country Club with a box of 64—don’t be stupid.”

Addressing Abby directly, Adriana wrote, “Do you remember you told me ‘Do you want me to tell you why you are really here’ lol as if I didn’t know.” She says Abby responded, “LOOK in the MIRROR! That’s the only reason you are here.”

Adriana also wrote that her daughter, Kam, said she was told “they need a sprinkle of color!”

Adriana also wrote, “As tears streamed down my face I look over at my 7 year old and back at the camera and say, this is my EVERYDAY life as a black woman. This is nothing new to me. But what I’m not going to have happen is have this racist person have any part of my daughters life as of this moment.”

She said her daughter was upset (“Mom you ruined it for me”), but added, “At that moment I knew that it was more important for me to show my daughter that she has to stand up for what’s right and not care about anything else.”

“People need to be held accountable not just for the injustices but for [sic] also being a closet racist.”

E! News reported that former Dance Mom producer Kori Kingg responded in a Facebook post. That post does not appear to be public, but was “shared with E! News.”

“Some would say I should be quiet about this. But THIS THIS!?! THIS broke me as I was working on show and pregnant with my own black daughter. In hind sight, I too should have left. I should have stood with my sister, Adriana Janae Smith and supported gorgeous baby Kam and left too. Seeing a 7 year old little black girl be put in a box in a corner and treated so violently because of the color of her skin was heartbreaking. It reminded me of when I ‘found out I was black’ at an age not much older than her.”

Camille Bridges, who appeared on Dance Moms with her daughter Camryn Bridges, told E! News that Abby “tried to spin Camryn as being the poor one and there on scholarship. I shut that down immediately. She loves appropriating our culture and never appreciating it.  She did not give black choreographers on the show acknowledgment of their work. She continuously put Camryn in afros.”

Camille says that “We were so relieved when she was gone especially when we thought she wasn’t coming back. When she returned, I looked at Camryn and told her we’re leaving. I didn’t care anymore about the ‘platform.’ I was done. The woman is a mess. She is incredibly two-faced. She would say the most terrible things on camera, then tell Camryn how she was better than the girls on the team, mainly the ones she trained. It was a traumatic experience that I wish on no one.”

Update: Abby Lee Miller has acknowledged her behavior and apologized in an image message posted to Instagram. I’ve transcribed that here:

“I genuinely understand and deeply regret how my words have effected [sic] and hurt those around me in the past, particularly those in the Black community. To Kamryn, Adriana, and anyone else I’ve hurt, I am truly sorry.

I realize that racism can come not just from hate, but also from ignorance. No matter the cause, it is harmful, and it is my fault. While I cannot change the past or remove the harm I have done, I promise to educate myself, learn, grow, and do better. While I hope to one day earn your forgiveness, I recognize that words alone are not enough. I understand it takes time and genuine change.”