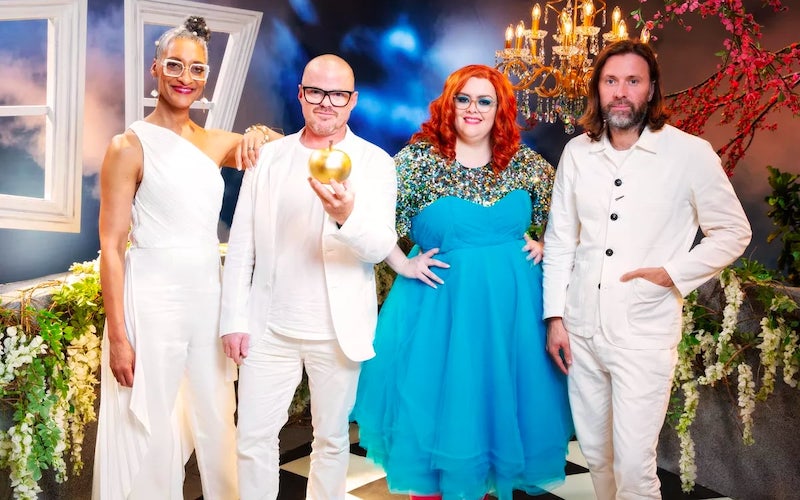 With a name like Crazy Delicious and a set that’s resembles a forest version of Willy Wonka’s chocolate room, Netflix’s new cooking competition sets itself up as another zany, wackadoo reality show that’ll tuck comfortably in next to Nailed It, Zumbo’s Just Desserts, and Sugar Rush.

So I was surprised by how sedate and quiet it was. But I quickly realized that its setting and title are deceptive, and it’s more like The Great British Bake-Off, just repackaged into bite-sized episodes (three contestants compete in each episode) and with a broader brief (the food should be crazy and delicious) and a colorful set.

The show is a co-production between Netflix and Channel 4, the UK network that now airs The Great British Bake-Off, and aired in the UK earlier this year.

There are just six episodes, and in each one, three contestants compete over three rounds:

To gather their ingredients, they forage in the forest, or “enchanted garden” and “magical, edible world,” as host Jayde Adams calls it in the intro. Set designer Peter Gordon has constructed this around a large tree, and beneath it is a lot of foliage and food.

Eggs sit in nests, shallots spring from moss in neat little rows, mushrooms grow from bark, and chocolate pebbles are scattered about. I can’t quite imagine stocking a pantry on a show like Chopped, so populating a forest with fresh produce must have been quite thrilling for the production.

The contestants—amateur home cooks—aren’t timed as they wander gathering their ingredients, nor do we see them find everything (like slabs of beef).

The space is the literal centerpiece of the show, yet it’s also underused. Sure, picking a shallot from moss and placing it in a charming woven basket is more delightful than watching someone grab a shallot from a table and put it in a baking pan, but it’s ultimately just a pantry. There’s no real reason for it to be that way, just as I suppose there’s no real reason for the GBBO contestants to be in a tent rather than a soundstage.

Besides having an unspecified amount of time to shop, they’re given generous amounts of time for their cooking—two hours for the first round, for example.

The contestants’ plans are illustrated for us, and they’re all kind and supportive with one another. There’s none of that faux Food Network fighting, where contestants attempt some form of trash talk.

Instead, the music dances lightly underfoot as host Jayde Adams issues time calls with puns, and is also there to offer a hug or a chat. The prize is simply a golden apple.

This is The Great British Baking Show’s DNA, just with a new costume. It’s perfectly delightful, though the artificiality of a soundstage can’t quite compare to the breeziness of the tent on a lawn.

The three judges are referred to as food gods—which is appropriate, since Carla Hall is one of the three. (I wasn’t previously familiar with the other two, Heston Blumenthal and Niklas Ekstedt.)

They wear white and dwell in the literal treetop, above the foraging forest, where they sit around a table and chat and judge the first two rounds, occasionally descending a staircase to deliver verdicts or visit with the contestants.

For a competition, there’s not a lot of clarity about what exactly they expect beyond the show’s title itself, nor what they want as individuals. What defines crazy? Eh. In the first episode, the contestants have to reinvent pizza, and Carla says she’ll look for the shape of pizza, while Niklas says he wants stringy cheese and tomato sauce. So you just want pizza then?

In the early episodes, at least, contestants seem to go for crazy by rethinking savory dishes as sweet, and turning sweet into savory. For example, someone roasts vegetables and works those into a barbecue-themed patisserie.

I’ve been disappointed by some of Netflix’s recent attempts to knock off popular competition formats: The Final Table, Next in Fashion, and most recently the disastrous Big Flower Fight all are adequate, but flimsy and uninspired compared to the shows they’re ripping off.

Despite its similarities to GBBO, never mind its format’s similarity to every other cooking competition (hello, Chopped), Crazy Delicious doesn’t feel like a knock-off or an imitation. It created its own world—even if it doesn’t quite know what to do with that world—and folded in ingredients that have worked well on other shows. That’s not crazy, nor is it anywhere near as great as The Great British Bake-Off once was, but it can be quite delicious.