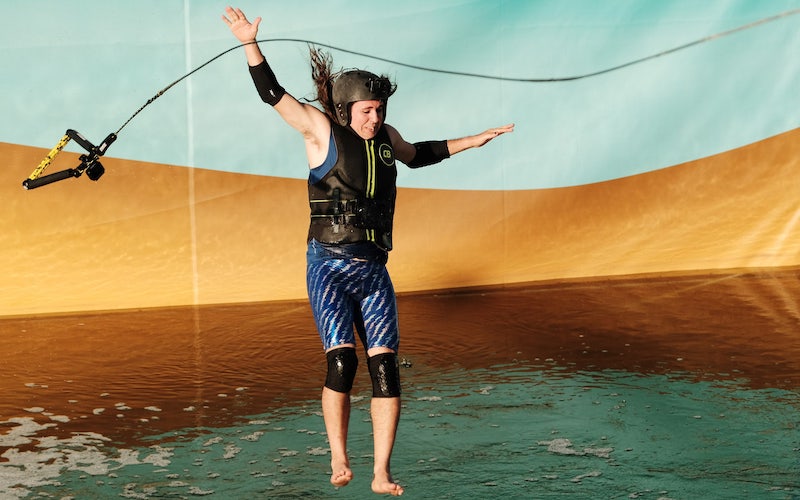 There is no type of competition reality show that more consistently gives me joy than formats in which people carefully attempt a challenge, and then bounce off a padded surface and get flung into the water in hilariously dramatic ways. I will watch them all, from Wipeout to Holey Moley to Floor is Lava.

But USA Network’s Cannonball, which is previewing tonight on NBC before its premiere next week, is a black bean dropping into a pool: bland, pointless, and barely makes a splash.

Cannonball is produced by ITV, which aired a version of Talpa’s format in the UK in 2017, though it lasted just one season. It had head-to-had jumps and skim-boarding, plus human bowling, which are both missing from USA’s version.

Allow me to first quibble with the title for a moment which is, just as a reminder, Cannonball. Co-hosts Mike “The Miz” Mizanin and Rocsi Diaz hos start each contestant’s run with a countdown: “3, 2, 1—cannonball!”

No one ever does a cannonball. They are never asked to do cannonballs, at least not in the two episodes that were provided to TV critics. There is one moment that kind of looks like it could be a traditional cannonball, but it was part of a preview of that particular challenge, and I should not have to strain to see a cannonball in a show called Cannonball.

Even if we’re to deconstruct a cannonball and think about what it produces—spectacular splashes, dramatic sounds, waves that rocket away from the splash—there is very little of that here. There are just people faling into water.

I’m sure that can be fun, but not with the challenges they’ve designed here. The centerpiece of the set is a massive water slide, called the mega slide, that’s seven stories tall and curls up at the end. The goal is to achieve height and/or distance.

Like so many of Cannonball’s challenges, the slide looks like an absolute blast to fly down, and is rarely interesting to actually watch. That’s because the contestants fly off the end of the slide, off the raft, and then just splash into the water. Even when there’s something in their way—inflatable distance markers, a large pillar marking height—it does not result in hilarious or spectacular tumbles into the water below.

On the “Savage Swing,” contestants swing out while riding on something (a giant beach ball, for example) and drop off, trying to land as close to a target as possible. They don’t have to do cannonballs, and most of them are just falling into the water. Some get close to belly flops.

I’m sure that’s wildly fun terrifying to do, and camera placement doesn’t capture heights well, because the contestants are often filmed from above or far away, and it’s just not illustrating what they’re experiencing.

“Surfrider” is a surf board that flies through the air suspended from a zipline, and requires the contestants to keep their balance. The second episode has a modified version, “Speedbag,” on which they have to grab a dangling punching bag and hold on. That delivers an unexpected wipeout or two as people fail to grab the bag and just get knocked off a platform. But for most contestants, we’re just watching someone hold onto a zipline and drop into the water.

Each episode has five challenges, and contestants are eliminated after each one. The final two challenges are Blast Off, which is essentially a fire hose contestants hold on to as it waves them around. Again: that looks hard to do and is probably either a ton of fun or completely terrifying, but it’s surprisingly boring to watch.

The finale features the return of the megaslide, now outfitted with a cannon at its conclusion, which does not make it any different from the first run. So the series basically repeats the same challenge twice in each episode.

Cannonball has no point of view, no reason for existing. The set design is bright and clean but sterile. There’s a tiny gaggle of spectators to scream, in front of which sideline reporter Simon Gibson asks the contestants questions.

Its contestants are repeatedly referred to as “athletes,” even though they are not actual athletes, so that could have been an attempt to mock them and/or establish these kinds of activities as a sport. But neither happens. They’re just called athletes.

Mizanin—who USA Network viewers may recognized from the WWE and Miz and Mrs., and the rest of us will recognize from The Real World and The Challenge—is particularly good at his job of color commentary. But he and Diaz (who co-hosted Dating Naked and, previously, 106 & Park) have so little to work with.

Based on the preview, there are other challenges to come, including a giant airbag blob on which contestants sit, until they are launched into the air by a weight dropping onto the other side. That’s not in tonight’s episode.

USA and NBC are airing episodes out of order, starting with episode 4, “Cannonballs and Mullets” and then episode 8, “Viva El Mustache!” (which airs on NBC this Sunday at 7), both of which I’ve seen.

Since those are the two episodes NBC Universal chose to get a wider audience on NBC, I imagine they’re the best, and if that’s the case, this Cannonball is most certainly a dud.