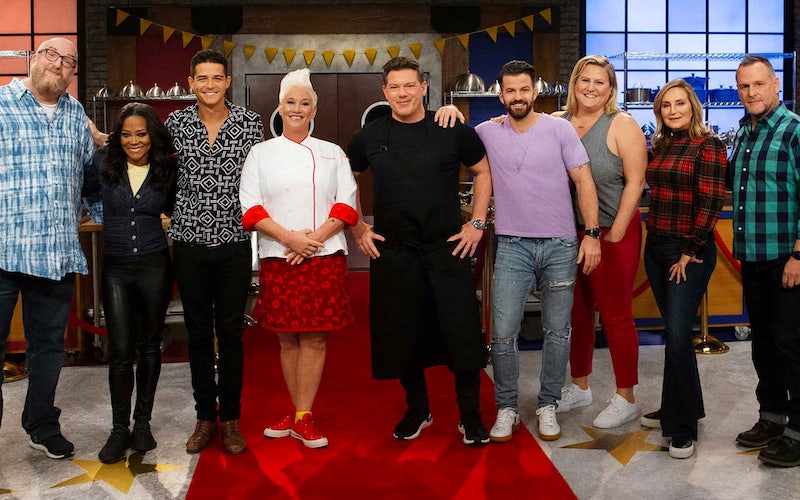 The cast of Worst Cooks in America season 19, which is the sixth celebrity version of the show (Photo by Food Network)

Worst Cooks in America is easily Food Network’s worst show, and I’ve seen the one where they make Alex Guarnaschelli stand in a parking lot while contestants awkwardly reach into people’s grocery bags. I feel so bad for Anne Burrell and whoever draws the short straw at the Food Network holiday party and has to co-host the next season.

The 19th season and sixth celebrity version Worst Cooks premiered tonight, and it was actually—entertaining? More than a little? I laughed several times! My working theory is that it’s working because it’s anchored by three reality TV legends: The Real Housewives of New York City’s Sonja Morgan; The Challenge fossil Johnny Bananas; plus Bachelor in Paradise bartender Wells Adams, who I always accidentally type as “Wells Fargo.”

Worst Cooks is typically bad because it’s trying too hard to be a bad show. Everyone, from the cast to the editors, is straining to wink so much that their eyelids are drooping from the overuse. And it’s even worse when it’s clear that a celebrity has to be coached into making jokes in their interviews.

All that effort just comes across as sad desperation, and the actual cooking part is an afterthought. Guy’s Grocery Games has a lot of ridiculous fun—depending upon your tolerance for Guy Fieri—but it’s also a legitimate competition. Worst Cooks doesn’t even try.

The cast may not be able to cook, but they do not seem to actually be there to learn how, whether it’s comedians with their non-stop bits or people who have run out of other options to rehabilitate their public image (e.g. Tonya Harding).

The celebrity edition is worse than the regular-person version, because the celebrities act as if their careers depend upon how much scenery they chew. Meanwhile, the show strains to shock its cast and viewers, like with its Fear Factor-ish challenge that led Taryn Manning to walk off the show.

So, yep, I’ll watch a Food Network competition any day, but I avoid this one like it came out of Sonja Morgan’s toaster oven.

That’s actually the only reason I tuned in: As a RHONY fan, and a Sonja fan, I wanted to see Sonja Morgan attempt to cook, since that’s actually been a storyline on the Bravo show, and was such a thing she actually attempted (unsuccessfully) to create her own line of toaster ovens.

Okay, yes, in the two-hour premiere, there was still plenty of cringe, like my use of that word. Some of Dave Coulier’s impressions and jokes should have stayed firmly in the 1980s. And just keep a close eye on his asparagus and Brussels sprouts for a fun lesson in reality TV editing, and how much editors can stretch a few seconds or minutes of footage.

But everyone felt less desperate, and Bridget seemed genuinely excited about being there, even when she was just walking her brunch dish to the judges.

For me, the three current reality TV stars really anchored the episode. I think that’s because they have so much practice at being over-the-top versions of themselves.

“I was crying already, but it wasn’t because of the shallots. It was because just what my life has become,” Wells said, as his shirt buttons kept coming undone.

There were a bunch of moments when I laughed: Jonny Bananas making an onion volcano; Sonja pulling out not one but two toaster ovens; Robin saying “I made food” and “I’m decorating”; Sonja faking stabbing herself while Bananas kissed up to the judges; Sonja hopping around impatiently while Anne and Tyler gave demonstrations; Anne calling Wells’ mimosa “incredibly alcoholic” (he’s used to bartending for Bachelor in Paradise!).

For every clunker of a bit or joke, there was a moment like Bridget saying that her awareness of TDZ, or “temperature danger zones,” made her her goal to “cook the diseases out of” food, and she explained her technique: “I just cook the shit out of it.”

I also loved Wells possibly breaking the fourth wall and repeating the kind of thing I’d expect a publicist or manager to have told their client when booking them on this kind of show: “I was told that you guys were going to say nice things, and negative things,” he told Anne and Tyler, after they critiqued his lasagne, which looked like something a Bachelor in Paradise cast member who’d had too many cocktails barfed up.

Even Tyler Florence was feigning far less than usual, and even kind of relaxed. “You do realize this is the Food Network and we have a whole wall full of ovens?” he asked Sonja as she shoved both fish and lamb in a single toaster oven.

I was disheartened at the end to see both Sonja and Bananas facing elimination, because this is too early for either to go out, especially in a competition as pretend as this one.

But the magic of reality TV producing saved Sonja, who joined Anne’s team, and also may have actually kept me as a viewer, for now. Who knew 2020 would have so many surprises?