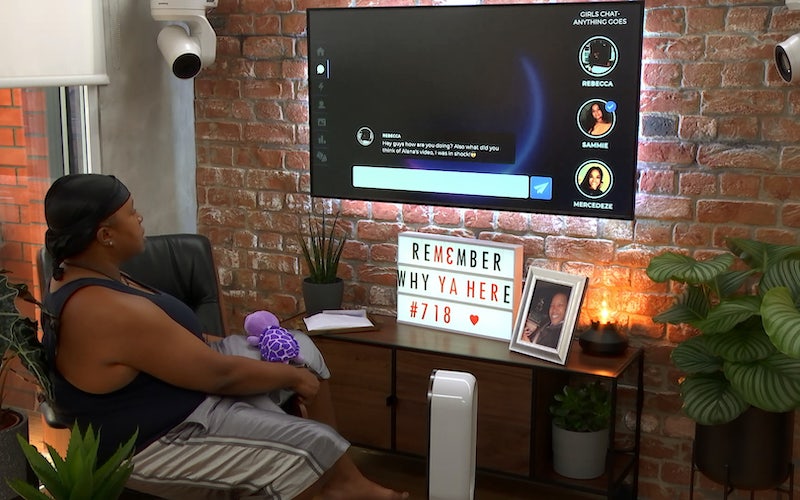 Karyn, aka Mercedeze, on The Circle's first US season, which was filmed with remote cameras and with contestants isolated in their own apartments. (Photo by Netflix)

Over the past few weeks, as people grow restless for their favorite reality shows, never mind a return to normalcy, I’ve seen some people argue for a simple, easy solution to bring back shows from Survivor to Big Brother to The Circle. Just quarantᎥne them! Easy! Done! Let’s get our shows back on the air!

As much as I wish that was possible, those arguments ignore one critical and crucial part of every reality show. There’s a lot more to going back into production than just locking 10 or 20 contestants in hotel rooms for two weeks. Let’s look at the three shows above as examples.

Big Brother seems like a likely candidate to come back soon. (CBS is optimistic!) After all, its cast members live in a house, cut off from outside contact. Even their interviews with producers are handled remotely. Skip the studio audience and we’re ready to go, right?

Nope. Because that ignores the people who actually make reality TV. Isolating the contestants would only affect a tiny fraction of a production. On BB, there are a lot of people occupying the same soundstage that holds the houseguests and their house.

The mirrors you see inside the Big Brother house conceal what’s called the camera cross, and that’s where actual human beings, in tiny, cramped, dark spaces, operate cameras along a track. During challenges, producers gather behind the back yard mirrors to watch closely, monitoring and tallying scores.

(For a detailed look behind the scenes of the BB house, read my tour of the camera cross, back yard, and master control room, and you can also read what it was like to go inside the bedrooms, kitchen, and bathrooms during filming.)

Upstairs in the soundstage, there’s a small, narrow control room where many people sit elbow to elbow. Some of them are typing every thing the houseguests say and do; others are controlling robotic cameras.

There is not room in that space for everyone to be six feet apart, and what we know now—while it’s changing as scientists learn more—is that prolonged contact with people in small spaces is the best way for this virus to be transmitted.

What about outside? The challenges that spring up in the back yard don’t get there by magic. Perhaps those craftspeople can work safely, but the back yard is a much smaller space than it looks on TV, and that work takes a long time. If you watch the Big Brother live feeds, you’ll know that the contestants are locked down for long periods of time—hours at the least, sometimes all day and night.

Pre-production (casting, planning) and post-production (editing, finishing) might be able to happen remotely, without face-to-face contact, but

Let’s look at another CBS show: Survivor. While it might be easy to isolate the 20-person cast of Survivor, guess how many crew members it has? Take a guess before you read on.

Can’t the cast of Survivor just stay in a hotel for two weeks?

Last spring, for Survivor: Edge of Extinction, there were 645 crew members. 645!

Dalton Ross broke that down in EW: “approximately 275 international crew members and 370 local Fijian workers laboring off-camera to make sure every single detail is in place for both the contestants and the viewers.”

I’ve been on location and seen this incredible machine in person, and I knew that hundreds of people were involved, yet that number still surprises me. It’s also surprising just how many people it takes to, say, film a challenge.

Just watch this video that ET Canada filmed behind the scenes of Survivor: Winners at War to see what is usually completely invisible to us.

I counted 18 people in the water and 13 on the shore in one shot of a challenge alone, and there are many more. Only in emergencies have we ever seen a hint of that apparatus on the actual show; otherwise, it evaporates.

Those hundreds of crew members work in extremely close conditions, and also have regular, close interaction with the cast. There are people working in offices; there are small boats that transport the cast and crew everywhere; there are caterers and cooks, who feed the crew; there are small tented camps where the beach crew goes on their breaks.

QuarantᎥne the crew, you say? Is that logistically possible to lock down 645 people for two months? I’m not sure if any of the 370 Fijian locals live in the hotel that Survivor rents out for the crew, but if any of them have friends or family nearby, or if they’re living at home while working on the show, what do you do about them?

There’s a lot more involved, too, if Survivor returns to Fiji to film (where the show gets a massive 45 percent rebate on all its costs. Fiji Airlines won’t resume international flights until at least July).

There may be creative solutions! But even a non-Fiji season needs to do more than just isolate the cast.

Will The Circle be the first show back in production?

The Circle seems like the most obvious candidate to return first. After all, every contestant is alone in an apartment, interacting with the other contestants via a social media platform.

The only time they come face to face—besides the very end of the game and reunion—is when someone is kicked out of the Circle, and chooses to visit another contestant. That could easily be done virtually, with video chat instead of an in-apartment visit. After all, every apartment already has robotic cameras, which is how the contestants are filmed.

But those robotic cameras aren’t operated by magic. There are a lot of crew members in the control room: “between 20 and 30 producers and camera ops working, recording, logging everything that was going on, and also studying the game and sending all the messages from the Circle,” the show’s executive producer told Vulture earlier this year.

That’d be really challenging to keep those employees separated by at least six feet from each other.

It seems much more likely The Circle could go back into production before Survivor or The Bachelorette, or even Big Brother, since there’s no cast interaction, but figuring out crew safety would have to happen first.

The good news is that may happen, though there’s work to be done. Stephen Lambert, whose production company Studio Lambert produces the UK and Netflix (US, Brazil, and France) versions, told the Hollywood Reporter that going into production this fall on new seasons is “realistic.”

“We’re creating a huge fortress, a sort of sealed environment where we’ll be able to control who comes in. Obviously the subjects are already isolated, so it suits what’s going on, but we’ll have contestants tested beforehand and we’re discussing having them quarantᎥned after they arrive in England,” he said. “You can create a closed environment, but you have to make sure you’re plugging all of the holes.”

The Hollywood Reporter pointed out that “countless variables — catering, days off for crew, quarantᎥned times — that now need vetting.”

In fact, in normal times, networks often leave health and safety responsibilities to production companies, which means that protecting cast and crew becomes dependent on an already-thin budget.

Perhaps this time offers an opportunity, as it does for so many parts of our lives, for reflection and systemic change. Or perhaps not.

Over the past month, the podcast Reality of Reality has put out some excellent episodes, with Aliza Rosen talking to producers and network executives about their present and the future, and it’s clear that these questions are being asked, which is a great start.

It’s easy for me, and those suggesting we should just put a cast in a hotel for two weeks and go back to normal, to forget that there are hundreds of crew members behind the cameras. I think that’s partially the result of how well most reality TV productions do their jobs. They make themselves, the actual production, invisible.

They may be too invisible. The producers, technicians, craftspeople, and other crew members—the names that fly by in the credits—are freelancers, not salaried employees, and not unionized workers. That means that the vast majority of people behind the camera lens are out of work now.

As much as I would like to them getting back to work, never mind to see seasons of my favorite shows returning on a normal schedule, reality TV crews need to be everyone’s very first thought when figuring out how and when to start producing once again.