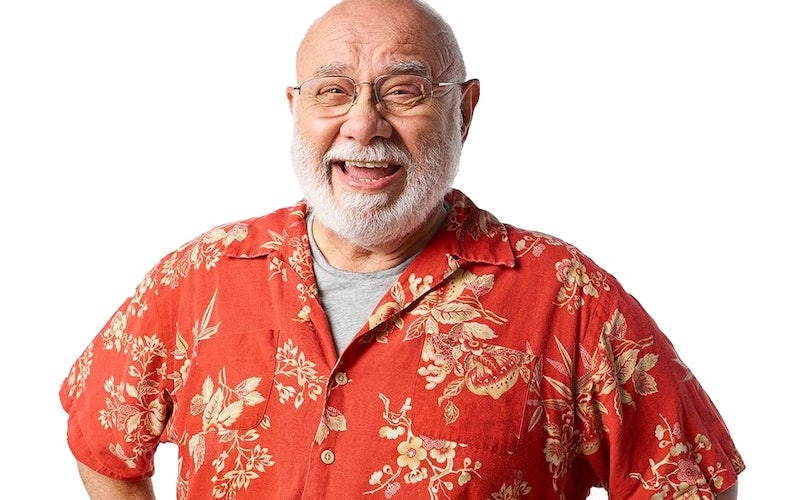 Frank was one of the TLC show’s first designers, and one of the six original designers who returned when the show was rebooted two years ago. He was known for what the Washington Post once called “folksy, artsy-craftsy” designs; the paper also said Frank was “an effete grandfatherly type who leans toward bright colors and painting animals on the wall,” while the New York Times called him “a robust Santa-like designer.”

When While You Were Out returned last year, Frank appeared on it with fellow Trading Spaces designer Vern Yip. Late Friday night, Vern tweeted, “Funny, wise, nice, and talented, he always lent perspective and levity to every situation. Thanks you for always being kind to me. I will miss you dearly friend”

Yesterday we lost a unicorn,
And we, a tight family lost our rock.
To know Frank Bielec was an experience…not simply a relationship. He was terribly smart, delivered one liners that could slay a Drag Queen Army, could craft or needlepoint his way out of just about any situation in life, was a full time introverted extrovert with the deepest most honest of hearts…that drove his entire being. As the youngest and oldest designer, we had a special bond, much like siblings and we met every time we could in the place we both felt most comfortable, talking honestly, from the heart and right next to each other in almost every photo I have from that time in life. Frank was like the sun and you just wanted to be next to him, his honest thoughts and warmth. To my sweet Slavic brother, my goodness did you give the world some light…I will look for you in the birds and the sugar gliders as I know there is no peace in resting for you.
I love you forever.

TLC wrote on social media, “We will miss and remember him fondly, his quirky style and wonderful sense of humor. We share our love and condolences with the entire Bielec family at this difficult time.”

In January of 2018, when he was in Pasadena promoting the upcoming reboot of Trading Spaces at the Television Critics Association press tour, Frank was as charming and funny as ever. Asked about the new budget, he said:

“Initially, when we first started the show, we were dumpster divers.  I mean, we almost got arrested taking down people’s fences and stuff like that.  I mean, that was a danger.  And now I think the $2,000 will at least get us a good lawyer if we need one.”

He also defended “Crying Pam,” who gave the show its breakout iconic moment when she walked off-camera after seeing that Doug had covered her fireplace. Frank said:

“What she didn’t realize is Doug toenailed that fireplace cover on there.  It could be easily removed.  But she was so excited this whole time, and her husband was very supportive of this and all this kind of stuff.

And the woman took a lot of heat and a lot of people made fun of her, which I thought was incredibly judgmental.  It was a very honest reaction and that reaction put us on the map.

…I think that when you have that kind of reaction—and it’s an honest reaction and people thought it was funny, many people—she took a lot of heat for that thing, because I communicated with them after that episode was over with.  I’m telling you right now that’s all I want to say about that.

…I have no problem with the room.  Doug is an incredible designer.  I have a huge love for him.  He would throw you under a bus if it fit his agenda and then give you his kidney.  Go figure it out.”

At TCA, the original designers were asked if they “[felt] responsible for everything that’s happened the last decade,” since the show premiered. His answer talked about the impact Trading Spaces had on him—and on its viewers.

“The show was life‑changing for me in many ways, but that was the one thing.  We gave people permission to play.  I was talking in an interview.  I mean, you have no earthly idea how many, really, grandpas would just turn [to] me and, ‘Let me show you what I did for my granddaughter’ or something.

In other words, you know, it may work out and it may not.  But if it doesn’t work out, this is what you can do to fix it.  We just didn’t give them an idea.  We showed them how to do it, and if you screwed up, this is the way to get out of it.  That’s the thing about that.”